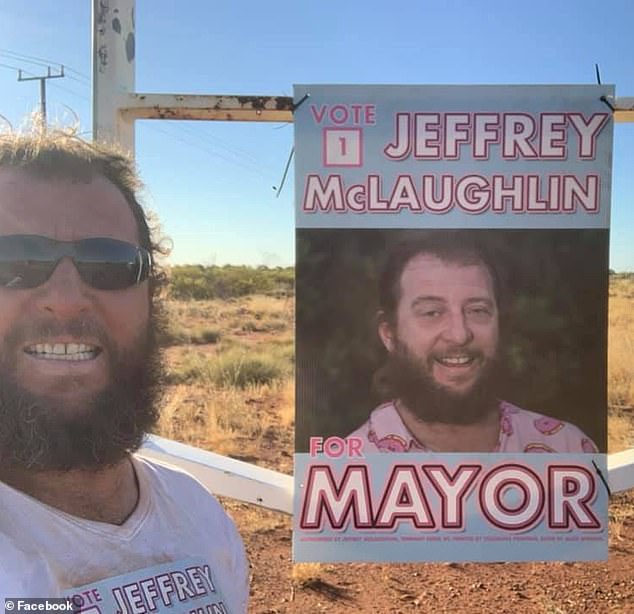 The mayor of an Australian regional council has been detained on drug charges.

A further search of a neighboring house reportedly brought up “a number of cannabis plants and substances” after the test allegedly revealed a positive result for cannabis usage.

Four drug offenses, including possession, supply, cultivation, and driving while intoxicated, were brought against Cr McLaughlin.

He has served as a councilor since 2017 and has served as mayor of the Barkly area for two years, which includes the majority of central NT.

One day after praising the placement of two nyinkka (spiny-tailed goanna) sculptures in Tennant Creek, the mayor was arrested.

He told NT News, “It’s wonderful news for the community and for tourism in the Barkly.”

The two nyinkkas, which are each nine meters long, will be there when the lizard people arrive to transport us back.

They “will always be here.”

Voters like Cr McLaughlin’s eccentric demeanor, which has helped him develop a reputation as a down-to-earth councilor.

After an escaped prisoner broke into his garden to “bum a smoke,” he made headlines earlier this year.

The mayor was unwinding in his lawn after taking the weekend off from work when he saw something leap his fence.

He first believed the blur to be his dog, but he soon realized it was Richard Henwood, a prisoner who had only five days before escaped from the Barkly Work Camp.

“Oh my god, what are you doing?” I exclaimed. I immediately thought, “That’s not the correct outfit for summer,” said Cr McLaughlin when he saw an old friend wearing a large black sweatshirt, a black sweater, and black jeans, according to ABC.

The fugitive then requested a smoke from the mayor before escaping down the street.

We called “Oi!” to my neighbor, after which I hurried outside and saw him go toward a different home, and I decided to just follow him.

I was considering using my old Taekwondo techniques on him, but I quickly realized that this wasn’t a smart idea. I’ll be spanked.

After Henwood and two other escapees were apprehended, authorities praised the public for helping them find them.

On October 11, Cr. McLaughlin is scheduled to show up in Tennant Creek Local Court.