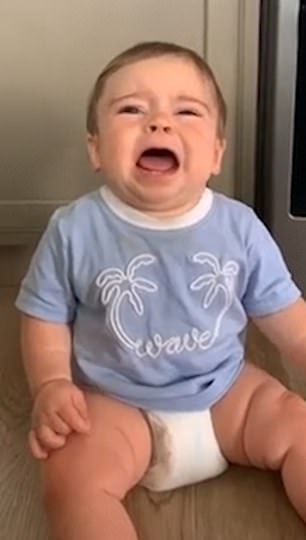 This is the amusing scene of a gummy one-year-old who is upset because he can’t bite into his mother’s sandwich because he lacks teeth.

When her son Royce decided he needed a nibble, Samantha Maples, 28, of Santa Rosa, California, was almost halfway through a handmade turkey sandwich.

She first attempted to divert him, but Royce was desperate to tuck in, so she started to record his attempts.

In the video, Royce can be seen repeatedly attempting to eat the sandwich but failing owing to his toothlessness.

The footage from August 11, 2020 shows the one-year-old balling his fists in frustration and tears of rage.

It’s not my fault you can’t take a mouthful, his mother giggled in the background.

I simply continued giggling, I take my teeth for granted every day, she said.

Now that Royce is three years old and has teeth, he is able to consume as many sandwiches as he pleases.