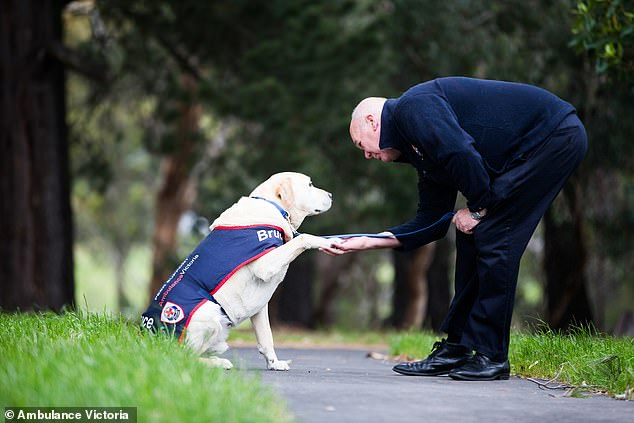 A service dog has passed away after bidding farewell to his handler, leaving a legacy for some of the nation’s most vulnerable emergency personnel.

Bruce the Labrador went away peacefully in the arms of his handler and owner Ken on Friday. Together, they were the faces of Ambulance Victoria’s acclaimed Peer Support Dog Program.

Bruce began his career alongside Ken at the age of six in 2018, as part of an experiment to improve the mental health of state paramedic workers.

On Friday, Ambulance Victoria posted a touching tribute on social media, along with a farewell photo, stating that Bruce always brought a smile to the faces of his coworkers.

“No one grumbled about the patch of blonde hair he would leave on your pant leg, and we were all more than pleased to comply with his request for a belly rub,” the article stated.

Thank you, Bruce, for everything you’ve done for AV and our families and friends. You will be missed. We are thinking of Ken and his family.

The message prompted a flood of tributes.

After a long shift and while leaving the Alfred, I had the pleasure of meeting Bruce. He approached me for pats and made me grin,’ recalled one.

You were such a good boy, Bruce, and you deserved a peaceful rest.

“I’m sorry to hear about Bruce. Ken and Bruce were both innovators, according to another fan.

“Your service, Running Free Bruce, is complete. Condolences to all,’ a third wrote.

The Peer Support Dog Program started as a pilot which it rapidly became a big success.

It has now introduced 16 more pups to bring consolation to workers, amid the force’s awful rates of suicide.

‘It is also three times the rate compared to other emergency services,’ Mr Walker said.

‘It is one of the many ways we are aiming to promote the mental health of our staff and ensuring our workers continue to offer outstanding care to our patients every time.