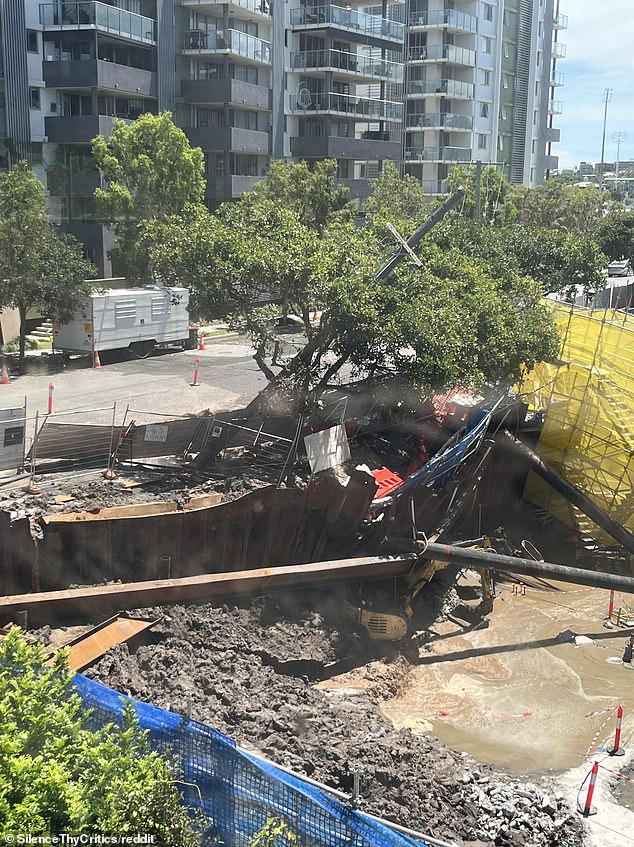 A ‘catastrophic’ wall collapse at a construction site in Brisbane caused a massive steel beam to fall on top of an excavator, but thankfully no workers were injured.

Monday around 11:30 a.m., a ruptured water main at the Albion site on Agnes Street in the city’s inner north caused a massive sinkhole and triggered a catastrophic event.

Emergency services discovered that a retaining wall had collapsed, engulfing a power pole, construction fencing, a portion of the road, and the temporary stairs that had been placed for workers’ access.

The 20m-wide sinkhole cut out power, water, and gas to adjoining apartment complexes, while the ruptured water main flooded the work site with a few inches of water.

The CFMEU, which was dispatched to the scene, shared footage of the moment workers were told to evacuate as water sprayed from the ruptured pipe and loud cracks could be heard on the other side of the fence as the wall collapsed.

‘Yeah get everyone back. Everyone out,’ shouts a worker.

Look at the crack in the road, she’s a terrible one, adds another.

The title of the video is “Catastrophic wall fall on Agnes Street.”

The footage then reveals the aftermath within the excavation pit, with the fallen steel retaining walls and a massive steel beam laying on the operator’s cabin of a digger.

The CMFEU official states, “It appears the entire side of the pit has collapsed in on itself.”

‘I’ve just spoken to management and happily no workers have been wounded.’

He then shows out the downed power pole and the broken yellow-striped scaffolding holding the temporary access stairs to the site.

“The workers told me they heard a loud explosion and everyone ran for their lives,” he added.

WorkSafe Queensland has initiated an inquiry and Queensland Ambulance has confirmed that nobody was hurt in the incident.

Daily Mail Australia has reached out to 5Point Projects, the company in charge of construction on the site, for comment.