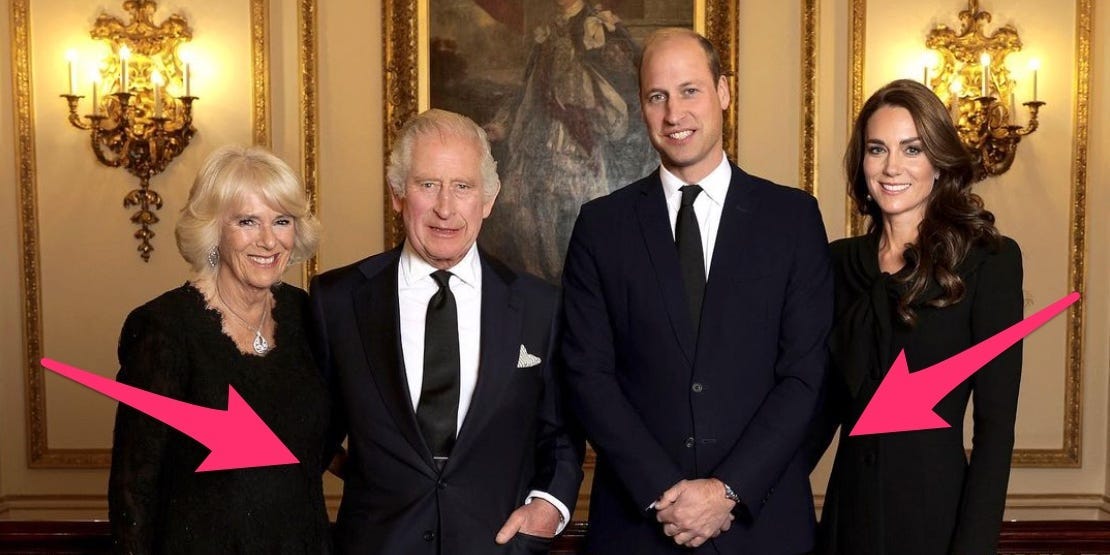 In a recently revealed royal photograph, Prince William and Kate Middleton are shown with King Charles and Camilla, the Queen Consort, and both couples are seen making quiet gestures of love in public (PDA).

The image of Charles, his oldest son, and their spouses was shot by veteran royal photographer Chris Jackson and released on Saturday by the royal family’s official Instagram account.

According to a press statement from Buckingham Palace that Tatler obtained, the photo was shot on September 18, the evening before Queen Elizabeth II’s royal burial.

The photograph was shot in advance of a banquet Charles and Camilla threw at Buckingham Palace for foreign dignitaries and heads of state, according to the press release. Joe Biden, the US president, Jill Biden, and Justin Trudeau, the prime minister of Canada, were among those invited.

Royals are not prohibited from PDAs, yet it is uncommon to witness them sharing intimate touch with loved ones. Instead, most adhere to an unspoken guideline and choose to preserve a healthy distance while doing official business.

The notoriously strict no-PDA rule was observed by Queen Elizabeth II and Prince Philip throughout their 73-year marriage, and they were seldom ever seen holding hands.

However, a closer look at the new photo reveals indications that both couples are indeed having PDA. Camilla’s left arm is wrapped over Charles’ right arm, which looks to be resting on her back.

Similar to this, William clasps his hands together and Kate’s right arm seems to be softly tucked behind his back.

The “fab four,” the new moniker for the four royals, are all seen grinning for the camera. Additionally, Camilla and Kate each adhered to the morning dress code by donning long-sleeved black mourning gowns. Charles and William, meanwhile, matched in dark navy suits and black ties.

The fact that three people who have held the title of Prince of Wales are shown in the new image is another subtle aspect of it.

Several royals in the line of succession underwent title modifications after the passing of Queen Elizabeth II.