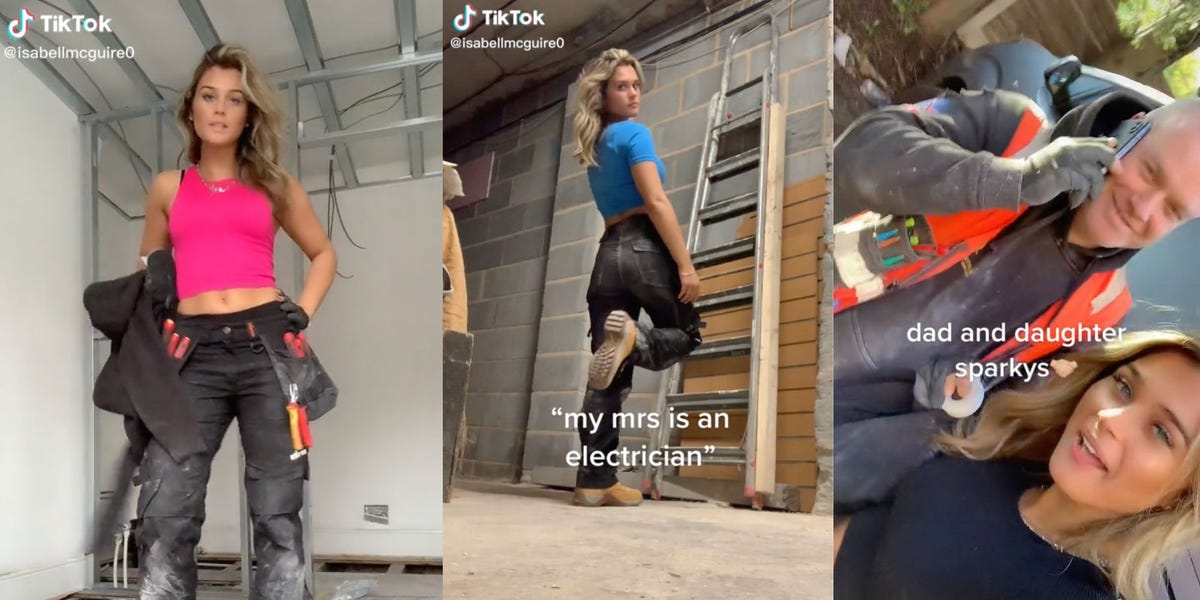 A TikToker who makes videos on her life as an aspiring electrician has garnered nearly 200,000 followers and millions of views.

Isabell McGuire, who is 17 years old and lives in Manchester, England, told Insider that although she had been producing TikTok videos for “years,” she had no idea that her electrician content would become so popular.

McGuire has had a difficult time going viral, as many have questioned her abilities and criticized her solely on her appearance.

She told Insider that despite the obstacles, she hopes to continue blogging in order to encourage more women to enter the business and to share her “open and honest” experience as a female electrician.

While pursuing a career as an electrician, McGuire has encountered online and offline sexism.

Her father, also an electrician, encouraged her to follow in his footsteps. After taking McGuire to one of his gigs, he stated that there are few women in the industry, and she saw an opportunity.

“There are women who do not want a man in their home, as well as women who cannot have one for religious reasons. I want to be able to make ladies feel at ease in their own homes and assist them with any necessary electrical maintenance “McGuire stated to Insider.

She is currently attending a technical college to become a certified electrician and claims to be the only female student in her class. “Many of the men were extremely surprised to see me there,” she stated.

She stated that she frequently receives excellent grades on her assignments and tests, which occasionally irritates her male classmates who insinuate she is not deserving of the grade.

McGuire also receives critical comments on TikTok from people who question her ability and skills as an electrician and if she can perform the job as effectively as a guy, particularly when she films TikToks from electrician tasks – which she does both with her father and as part of her training.

She has received feedback advising her to avoid “breaking a nail” on the job and doubting her ability to concentrate on the electrical work while filming.

McGuire has also encountered objectification and sexual harassment in the comments section of some of her TikTok videos, as she describes it. They range from telling McGuire repeatedly that she is “beautiful” to requesting her to “plug” their “socket” and stating that they feel “chemistry” with her.

McGuire stated, “I do not reply to these remarks. The fact that I take care of myself and look great doesn’t imply I can’t do the job, she added.”

She hopes to continue posting about her journey to inspire other women despite the obstacles.

Initially, the unfavorable TikTok comments bothered McGuire, she told Insider, and made her feel as though she may not be able to become an electrician after all. With time, she has learned to disregard them and concentrate on advancing her job. “It is something I would like to do. I enjoy it and am confident I can achieve it “She stated,

She stated that her father enjoys her TikTok videos. “It amazes him how much it has grown and how many people it has influenced. I see so many women commenting, “Oh my God, I want to do this!””

McGuire is ecstatic to read comments and messages from viewers stating that she helps them feel “assured” and believes that this will pave the way for “more women in the profession in the future.”

McGuire told Insider that she will continue to create TikTok videos, but she also has broader goals: “I intend to establish a business named Pink Power. I want it to provide women with extensive training so they may go to work together and motivate more women to enter the profession.”

She remarked, “Posting on TikTok and receiving such a positive response has been astounding. I never anticipated that, but it’s something I’ve always discussed, and I’m happy that my content is encouraging others.”