Skip to content
Home » News » Breaking News » 4,000 gay men joined me on a 10-day cruise. After it ended, I cried for days and can’t wait to return 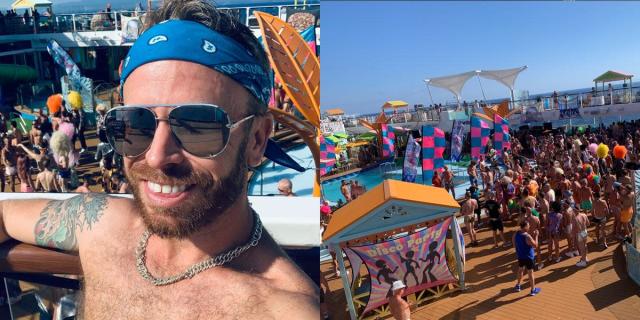 At the conclusion of the disco-themed closing dance on my 10-day “all-gay” cruise, I reconnected with a man with whom I had shared some private moments.

As we moved to the opening notes of “Last Dance” by Donna Summer, I fell into tears. I sobbed on his shoulder for the duration of the song. I recall believing I had fallen in love.

Not with him, no matter how charming he was. And not with cruising, however wonderful that was.

I was infatuated with being the majority.

When I planned my “gay-only” cruise, I anticipated disappointment.
Occasionally, you do get what you paid for.

My dancing group got me to purchase the 10-day Odyssey of the Seas cruise on Royal Caribbean. The unique Atlantis voyage in 2022 would carry approximately 4,000 LGBT passengers, the vast majority of whom would be men.

People in my life warned me to keep my expectations in check. I was warned to expect claustrophobia, cabin fever, endless gluttony, costly luxuries, ridiculously planned “entertainment,” and grumbling elderly people.

Some of my homosexual friends reacted negatively, stating that a “all-gay” cruise would be the worst possible idea. Others included a laughing emoji each time they texted about it, as if the option itself was absurd or being entirely surrounded by homosexual people was cringe-inducing and humiliating.

I now understand that until you’ve been on one of these cruises, you have no concept what goes on on board.

I was having the time of my life from day one; we had built our own floating cosmos.

As our ship departed Rome, I realized that I had never previously been surrounded by so many gay men. For ten days, I would be the majority. It filled me with hope and optimism.

Our orange Atlantis lanyard seemed like a symbol of our community; it elicited a friendly smile, a playful wink, or an interesting chat.

I was also surprised that the ship was not filled with young partygoers. I met individuals of different ages. I met homosexual couples, singles, and individuals from all over the world.

The boat was filled with pleasant passengers and amusing decorations.

The enormous ship was not merely a floating city; it was its own cosmos in which normal conventions were inverted.

Nobody would have batted an eye if you strolled into the cocktail-serving piano bar wearing only a jockstrap. On occasion, pianists squeezed into elevators to lead us in song as we traveled to a lavish party.

It was how heaven would appear if God were homosexual. You haven’t truly lived until you’ve witnessed a man’s naked ass cheeks wiggle in sync to a Sondheim song performed live on the piano.

I had the impression of being taken to the Good Place.

The cruise made me realize how much energy I spend simply being myself. The voyage has only increased my affection for the LGBTQ community.

As a British-born gay guy residing in Australia, I am pleased that I can be myself. Still, it takes resiliency not to sweat the small stuff. It requires self-control not to accept microaggressions, but rather to use them to drive my resistance.

Each day, I must resist the heteronormative world’s customs and standards, which many homosexual men like myself choose to reject. All of this requires energy.

When I was in the majority for those ten days on board, I did not need to feel “brave” for my choices; when I wore a bright romper, 20 other men wore the same thing, and no one blinked an eye. I was able to flirt with or initiate eye contact with a guy without having to first consider his comfort and then my safety.

When I did not exhibit the typical heteronormative behaviors, dress code, and etiquette, I did not fear being rejected. I never encountered anything other than kind, friendly, and receptive conduct.

Instead of being glanced at or discussed as unique, I simply blend in. With this realization came the realization that I probably don’t experience freedom as frequently as I believe I do.