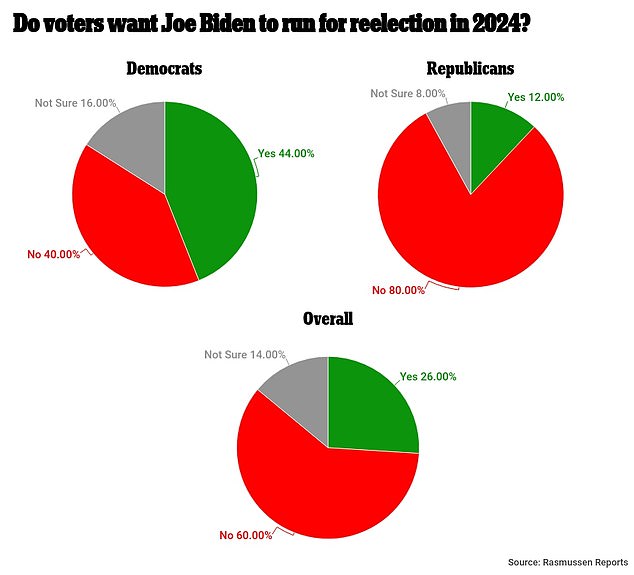 Three weeks before the midterm elections, a new, dismal survey reveals that the majority of Americans do not want Joe Biden to run for reelection. Democrats are divided on whether they want the President to be their candidate in 2024.

According to a Rasmussen Reports study, 60% of all American voters do not want Biden to serve a second four-year term.

However, just 26% of voters, or little more than one-fourth, say they want to see him run again, while 14% of respondents indicate they are undecided.

The study was conducted on 1,000 potential American voters between October 12 and 13.

In the event of a Biden-Trump rematch, another 13% of voters would choose a new candidate.

Voters who do not identify as Democrats or Republicans favor Trump by a 12-point advantage, or 43 percent to 31 percent, if this hypothetical rematch were to take place today.

Republicans, predictably, are very opposed to Joe Biden remaining in the White House for another four years.

Biden’s age, mental and physical condition, numerous public gaffes, his son’s international business connections, ignorance of the southern border situation, and the economy under his leadership are all recurring complaints from the GOP and other detractors.

After the White House dismissed worries about the GDP heading lower due to the coronavirus outbreak, analysts now claim that the United States is 100% on track for a recession. Inflation and petrol prices reached high marks during Biden’s first two years in office.

The same survey reveals that although 43% of respondents believe Biden is intellectually and physically capable of serving as president, just 26% are’very confident’ in that assertion.

However, another 40% have “no confidence” in his skills.

Since the same survey was done in February, these results have hardly altered.

Biden has hinted that he plans to serve for an additional four years after his first term, however he has not publicly declared that he would seek reelection in 2024.

He has also brushed off charges that he is physically and intellectually unfit for government as well as age-related issues.

Democrats are attempting to hang onto their majority in the House and Senate, but the poll findings are bleak with just 22 days before the midterm elections. Biden expects to travel the campaign road later this month.

Other Democrats are also going out on the campaign trail to support candidates in close races and districts that are at danger, while Biden’s popularity ratings are still in the low 40s.

Later this month, former president Barack Obama intends to attempt to assist politicians in Michigan, Wisconsin, and Georgia run for office on his coattails. This includes Stacey Abrams, a former unsuccessful candidate for governor of Georgia, who is making a second run for the job.