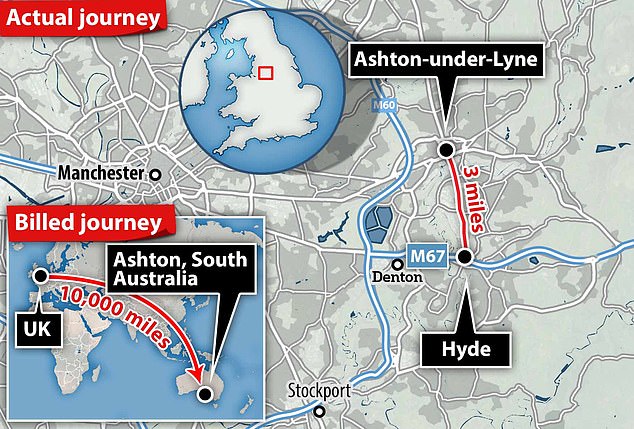 A man was stunned when he was charged £35,000 for a 15-minute Uber ride because the driver mistook a city in Manchester for one in Australia, 10,000 miles away.

On a vacation to visit friends, 22-year-old Oliver Kaplan was informed that the four-mile travel from Hyde in Greater Manchester to Ashton-Under-Lyne would cost only £10.

The following morning, though, he discovered that Uber had attempted to withdraw £35,427.97 from his bank account.

The Uber driver is said to have confused Ashton-under-Lyne with Ashton, South Australia, near Adelaide.

The auto business adjusted Oliver’s fee to £10.53 and apologized for the mistake.

22-year-old Oliver Kaplan was informed that the four-mile trip to Ashton-under-Lyne would cost £10.

The Uber driver is said to have confused Ashton-under-Lyne with Ashton, South Australia, near Adelaide.

Oliver told The Sun, “The driver escorted me directly to my destination.”

My debit card was charged between £10 and £11 for the ride, which lasted no longer than 15 minutes.

“However, when I awoke with a hangover, the last thing I anticipated was a bill for nearly £35,000.

It stated that the money could not be deducted due to inadequate finances.

If I had had that amount of money, I would have pursued a refund.

It may have put me in a variety of financial straits.

I’m still perplexed as to how the location was set to Australia, given that it is on the opposite side of the globe.

It was, to say the least, a tense half-hour, but thankfully, they were quite accommodating and fixed the problem immediately.

A Uber representative expressed regret for any inconvenience caused.