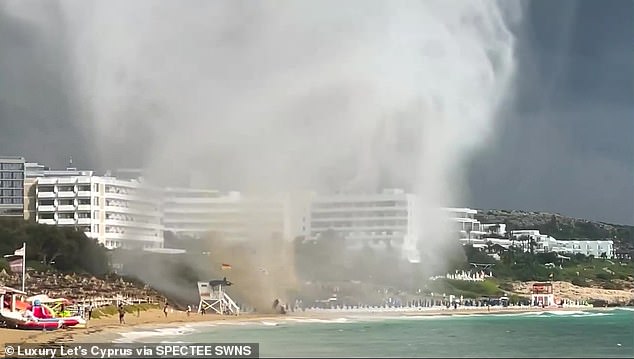 When a fierce waterspout wrecked havoc along the shoreline of a well-known tourist destination, sending beach furniture and other debris soaring into the air, guests feared for their lives.

Ayia Napa, Cyprus, had a twister on Monday that was captured on camera as it created a long, thin column over the lake.

It immediately picked up pace, expanded into a bigger tornado-style twister, and grew broader and faster as its speed increased.

As vacationers left the area, it eventually makes its way towards the beach, throwing beach chairs into the air and mixing sand and water.

The only significant damage, according to local police, was the movement of few beach sun loungers.

According to government statistics, Ayia Napa is one of the most popular locations for the approximately 1,000,000 British visitors that visit Cyprus each year.

Over large bodies of water, waterspouts form, snatching up the vapor and pulling it upward.

The thin “tornadoes,” which are sporadic in late summer and fall, may be hazardous for beachfront areas and boaters, but they pose little concern further inland since they dissipate quickly after moving ashore.

But sometimes, the swirling columns of air and water droplets may harm an area just as much as a tornado.

They may be divided into two groups: tornadic waterspouts and fair weather waterspouts.

Tornadic waterspouts are linked to powerful thunderstorms and often come with strong winds, rough waves, significant hail, and a lot of hazardous lightning.