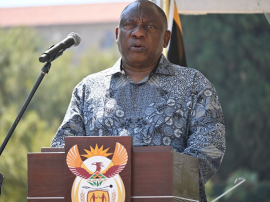 President Cyril Ramaphosa has used today’s Heritage Day celebrations to appeal to South Africans to persevere as the country continues to experience load shedding and the Russia-Ukraine crisis that has sent oil and food prices soaring.

Addressing the nation from the Union Buildings in Tshwane under the theme ‘Celebrating the Legacy of Solomon Linda and South Africa’s Indigenous Music’, President Ramaphosa acknowledged that the country was going through an energy crisis that has plunged the country into darkness for years.

“In the recent two weeks, we have been seeing a rise in load shedding disrupting our lives and economy and causing havoc from a social and health point,” he said.

However, he told citizens that government was dealing with the crisis head-on.

“Even as we face these challenges as South Africans as we have done in the past.

We have persevered and I ask once again, let us persevere,” he said.

“The challenge is being addressed. It’s a complex one and we will be speaking soon about the various measures that we are taking to make sure that we address this challenge.”

Reflecting on COVID-19 which claimed over 100 000 South Africans, he warned citizens that the pandemic was not yet over even though it may be less severe since the first case was reported.

“Then we had the unrest of last year where two million people lost their jobs and the economy suffered greatly. Then we had the floods that devastated the livelihoods of many of our people,” he said.

“Then we had the challenge of rising food prices and fuel prices, because of the conflict between Russia and Ukraine. That is having an impact on us.”

Despite the challenges, the President said he was pleased that the nation was able to celebrate Heritage Day to display different cultures.

“It is an important day in the life of the nation because it makes us remember the past. But it also makes us appreciate the diversity in our cultures, our languages, and our traditions. It also enables us to look forward to the future. A future that at the moment yes is challenged by several things that are happening around the world and in our country.”

However, he has asked South Africans not to lose hope.

“They may ask how can we celebrate through dance and music and art at a time when our country is being plunged into darkness through load shedding, when so many people have lost their jobs due to the COVID pandemic and when families are struggling with the rising cost of living?”

He believes it was times like this when heritage becomes even more important.

“We are a nation with a heritage defined by struggle, by courage, by perseverance, by a determination to overcome even the greatest challenge.”

The President reminded South Africans that they were friendly and hospitable people and said it was inconsistent with the values to be xenophobic.

He also called for a stop to the culture of rape and the scourge of gender-based violence and femicide and abuse of children.
Art and culture

Paying tribute to Solomon Popoli Linda, who performed classics like Imbube, he said he played an important political conversation about the state of the country.

“We chose this theme to acknowledge the role that indigenous music, especially isicathamiya, played in the lives of our people during the dark days of colonialism and apartheid.”

According to the President, indigenous music did not entertain, but comforted the dispossessed black majority and mobilised and united them.

“In the township community halls, the marketplaces, the beer halls and the open fields where groups like the Evening Birds led by Solomon Linda performed classics like iMbube were places where important political conversations about the state of our country took place.”

While South Africa was still a British colony, he said it was said that Solomon was made to sell the rights to the song to a record company for less than US$ 1 in today’s currency.

“It was a robbery…” he admitted. “This song has given joy to so many people throughout the world and put millions into the pockets of music producers, but Solomon Linda died impoverished in Soweto in 1962.”

He asked the nation to look at itself through the prism of its culture and tradition and honour those who have so enriched their arts.
“We know that our artists went through a very difficult time during COVID.

We made many efforts as well to support our artists.”

However, we acknowledge that the support may have not spread as broadly and as widely as we should have.

He said he hopes that the new Copyright Amendment Bill passed by the Parliament at the beginning of Heritage Month will go a long way in protecting our artists towards addressing their concerns about royalties.