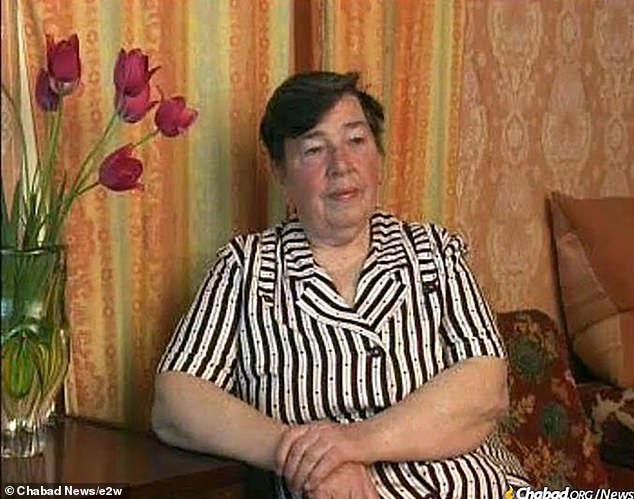 Aged 10, Vanda Obiedkova survived Hitler’s Nazis, who were invading Ukraine, by hiding in a basement in Mariupol, though her mother was taken away and executed.

Exactly 81 years later, she died in a basement in the same city, once again hiding from an invading force – Vladimir Putin’s Russian army.

As she lay dying, in the freezing cold, and pleading for water, the Holocaust survivor asked her daughter: ‘Why is this happening?’

Reports say that she was forced to live underground for the last two weeks of her life, as she was ‘ill’, ’emaciated’ and unable to stand up.

Vanda died frightened and confused from the Russian onslaught in the city she loved.

Her family had to risk their lives to bury her, due to the relentless Russian bombing.

‘Mama didn’t deserve such a death,’ said Obiedkova’s crying daughter, Larissa, through tears, soon after escaping to a safe location.

She died on April 4, but only now has her shocking story emerged.

Larissa had ‘watched helplessly as her mother’s life ebbed away, remaining at her side until the last moment,’ reported Chabad.org.

‘After her mother passed away, Larissa and her husband risked their lives to bury Obiedkova, amid non-stop shelling, in a public park less than a kilometre from the Azov Sea.’

Vanda was born in the city on December 8 1930, and was aged ten when the Nazis stormed the city.

The Jews were rounded up and when her mother was taken away, Vanda evaded the SS by hiding in the basement.

‘She couldn’t scream; that’s what saved her,’ says Larissa.

In October 1941, the Germans executed between 9,000 and 16,000 Jews in ditches on the outskirts of Mariupol – including her mother and the girl’s entire maternal family.

Vanda was later detained but family friends insisted she was Greek, saving her life.

‘Her father, who was not Jewish, then managed to get her checked into a hospital, where she remained until Mariupol was liberated in 1943.’

At the time Mariupol was known by its Soviet name of Zhdanov.