Skip to content
Go Home «» News «» World News «» Over the next 10 days, a giant rain bomb will sweep Australia 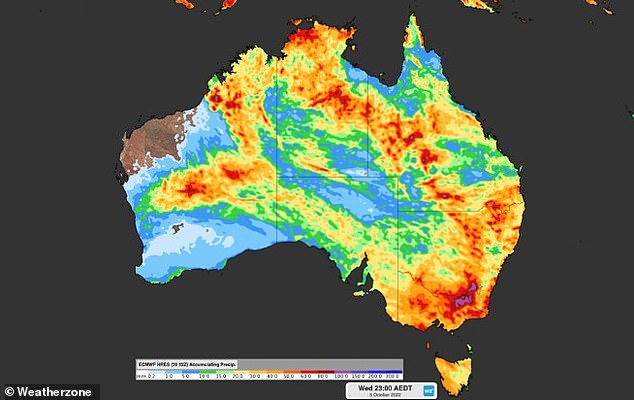 Over the next ten days, rain will fall in almost every region of Australia as a gigantic rain bomb sweeps the nation.

A huge amount of precipitation is expected to fall throughout Australia’s states and territories as a result of the collision of a major low pressure system with a cold trough.

Northern Victoria and southern NSW, which have already had floods in recent days, are predicted to get the worst rainfall.

In only the last month, some catchments have already received more rain than they do on a yearly basis.

Three states may see severe thunderstorms during the next three days, according to forecasters.

This week, NSW is forecast to see moderate to catastrophic flooding; the heaviest weather is predicted for Tuesday and Wednesday.

Tuesday is expected to bring thunderstorms to the state’s east, along with potentially damaging winds and hail.

According to Weatherzone, as the massive system moves over the country over the next 10 days, almost the whole nation will see rain.

Early next week, a second low pressure system is expected to impact Western Australia’s Pilbara and Kimberley regions; this one may bring unusually warm weather.

While September has been dry for Broome, the beginning of October may bring heavy rains.

Although forecasts warn the situation is still “changing,” a low-pressure system that produced heavy rain and inundated dozens of river systems in interior NSW and the state’s north in the latter half of the week is heading offshore.

Flood warnings were still in effect for 28 river systems early on Saturday, ranging from the interior west to the Northern Rivers and the Mid North Coast.

After the Namoi River reached its height on Saturday morning at 8.24 meters, considerable flooding was still occurring in the town of Gunnedah, which has 9000 residents. On Sunday, the water is anticipated to be at a high level.

Floodwaters in Wee Waa, roughly 120 km to the northwest, are still slowly receding but may continue to rise into the next week.

If the summer brings significant rain, Mr. Campbell said, “we may definitely have a record flood—likely something we haven’t seen since the 1970s.”

In the Tumbulgum hamlet on the Tweed River, the heavy weather has sparked fear following Friday’s flooding of paddocks and bank failure.

Everyone in the area, she added, “is constantly on edge, especially so near to another large event.”

In central western NSW, a five-year-old kid perished after being caught in a vehicle that was washed away by floods.

On Friday night, two cars, including a Toyota Hilux, became stuck in floods on McGrane Way in Tullamore, northwest of Parkes.

A 37-year-old male, a 28-year-old woman, as well as a small child and girl, were discovered clinging to trees in the Hilux and were rescued by emergency personnel using a boat.

The five-year-old youngster was, however, stranded inside the vehicle before it sank and was carried away.

NSW Police officers began looking for the Hilux on Saturday, and at about 3.20 p.m., police divers discovered the boy’s corpse inside the still-submerged vehicle.

His family was brought to the Dubbo Base Hospital to be observed. The people inside the second car weren’t hurt.

The Hilux has now been found, and police are now looking into the incident before writing a report for the coroner.

»Over the next 10 days, a giant rain bomb will sweep Australia«