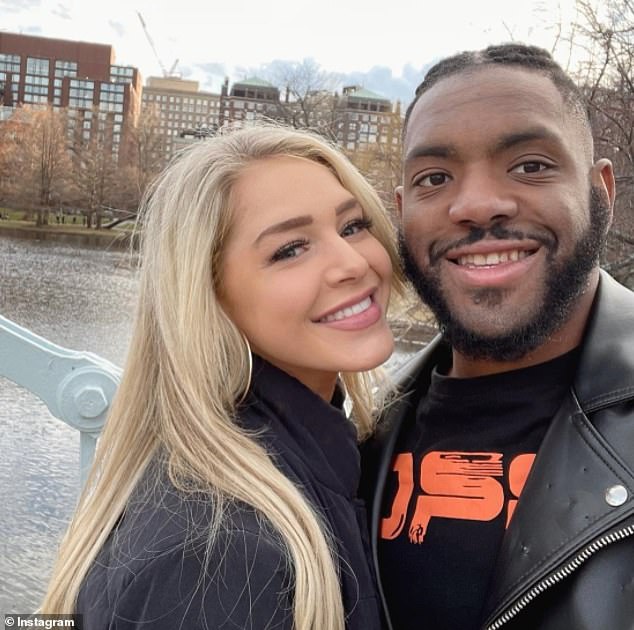 In the months before his murder, a man who was fatally stabbed by his OnlyFans model fiancée had been surreptitiously filming her onslaught of verbal abuse, which included her calling him the n-word.

Christian Obumseli, 27, was brutally stabbed in the chest at a Miami apartment when the two were having an argument on April 3. Courtney Clenney, 26, is now being charged with second-degree murder.

New evidence in the murder trial, however, demonstrates that Clenney yelled racist obscenities at her partner only weeks before she stabbed him in the chest, berating and abusing him in public and private.

According to the Miami Herald, the OnlyFans model repeatedly uses the n-word, “man up b***h,” and “shut up and let me hit you, stupid a**” in the recordings that were discovered on his iPhone.

The video show Obumseli apologizing after their argument about him greeting one of his female friends while he was out biking.

Prior to exclaiming, “I want you to go away from me,” the 26-year-old model can be heard yelling profanity at her boyfriend and ordering him to get her mobile phone.

The additional audio recordings, according to Obumseli’s family attorney Larry Handfield, are “shocking” and reveal “A persistent pattern with someone who is unhinged and out of control.” In this whole relationship, she is the one that is abusive and aggressive.

Another piece of evidence from the phone records shows that when Clenney firmly asks her partner whether he is “done gaslighting me,” he answers, “Courtney, that’s a f***ing threat.” You slapped me despite my attempts to apologize after I asked you anything.

Bodycam video from the day before Clenney stabbed her boyfriend captures her pleading and weeping with police to help her get a restraining order against him.

Her attorneys are attempting to make the case that she stabbed him in self-defense and that the day before, when she accused him of following her, she was obviously terrified and agitated.

This comes after video of the two in an elevator showed Clenney punching her companion two months before he was fatally killed.

Obumseli was urgently trying to deflect her punches when he saw Clenney aggressively slapping and tugging his hair. The heartbreaking video, however, lacks context, according to her lawyers, and her actions were really reflexive.

The pair can be seen on the footage taken on April 2 entering the foyer of the opulent Miami high-rise where Clenney and Obumseli resided, when a doorman informs them that there had been a domestic disturbance.

Clenney is seen conversing on her phone while looking distressed and inconsolable before requesting the doorman to allow her back into the flat after she accidentally locked herself out.

She continues by saying that a week earlier, she had broken up with Obumseli and that her mother had come to stay with her to support her. She said, however, that he had been dozing off the whole time in her “elevator room.”

He slept on a sofa inside my elevator room, which is stalking, therefore I broke up with him. She informed the police that he wouldn’t leave her alone.

The bodycam film shows a hectic situation with several individuals talking at once. At one point, trembling Clenney attempts to convince the cops to pay attention to her.

A 911 call the OnlyFans model made last month after fatally stabbing her partner showed how she wailed “baby, I’m so sorry” before slicing into his shoulder.

It was the tragic conclusion of the young couple’s turbulent relationship; only the day before, she had contacted the police to report that he was allegedly attempting to assault her.

The recording showed her pleading with the paramedics to arrive quickly at the Miami condominium.

She begged him to put the phone down, saying, “Please, my partner is dying from a knife wound.”

She wept to the operator and expressed her regret for stabbing him without disclosing to him that she had done so.

Obumseli may be heard wailing, “I can’t feel my arm,” in the distance.

Currently being held on suspicion of second-degree murder is Clenney.

She maintains that Obumseli hit her often and that it was self-defense.

The recording, according to her attorney, shows how upset she was after stabbing him and how adamant she was to keep him alive.

This is not a person who carelessly stabbed someone.

Her attorney told The Miami Herald, “Obviously, you can hear from her emotions that she’s pleading for someone to come soon to assist.”

The family of Obumseli hears a different story. They claim that it demonstrates how she had planned to murder him but changed her mind after cutting him with the knife.

It reveals how she is feeling. She is apologizing because she understands what she has done. According to Larry Hadfield, the lawyer for his family, she is not claiming that “I was protecting myself.”

On April 1, the police were summoned to the apartment building.

Obumseli, according to Clenney, had been “stalking” her.

Building security personnel may be seen correlating her account and discussing how Obumseli “came towards her” in bodycam video of their encounter.

Obumseli was taken to the hospital right away but passed away from his wounds.

His family believes that Courtney was always the aggressor in their relationship and that drinking changed her into a “different person.”

Earlier this year, Clenney was detained in Hawaii. In anticipation of the beginning of her trial, she is now being detained in detention.

Less than two years had passed since Clenney and Obumseli started dating, and things were rocky.

Police were repeatedly summoned to their Austin, Texas home after she was detained for domestic assault in Las Vegas.

The couple relocated to Miami at the beginning of the year, and since then, employees and residents at the One Paraiso building have received several complaints about the couple’s involvement in domestic disputes and have even taken steps to remove them.

In April, Obumseli’s brother expressed his ire at her for not being prosecuted with murder right away, claiming that this was due to her privilege as a “rich white lady” and not because she claimed she was acting in self-defense.

Just after the murder, a model was seen on camera covered in blood on her high-rise balcony.

The truth, as Jeffrey Obumseli put it, “is unavoidably clear: Courtney is being treated differently because of her privilege as an affluent White lady.”

“The investigator on the case hastily decided this was not a crime of violence within 24 hours of Toby’s death.”

Since she was accused of murdering her lover, Clenney has been uploading X-rated material on her OnlyFans website throughout the inquiry.

A day after she murdered Obumseli, X-rated material started to emerge on her website, however it’s unclear whether it was planned to go public before the tragedy.

Clenney’s page was deleted almost immediately after her arrest.