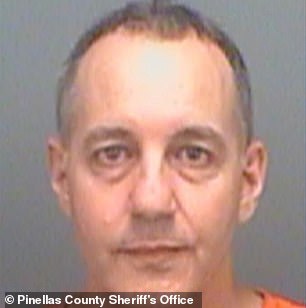 A member of the Oath Keepers militia has pleaded guilty to engaging in seditious conspiracy during the January 6, 2021 attack on the U.S. Capitol, and will be expected to testify against the group’s leader Stewart Rhodes.

Brian Ulrich, 44, of Georgia pleaded guilty on Friday during a hearing in federal court in Washington DC. He sobbed as the judge warned he could face up to 20 years in prison, though sentencing guidelines call for much less time.

Ulrich was one of 11 Oath Keepers members charged with seditious conspiracy in an indictment unsealed in January, which also names Rhodes, the founder of the far-right militia group.

Rhodes has pleaded not guilty and is expected to face trial later this year — but in pleading guilty, Ulrich agreed to testify against Rhodes, which could bolster the government’s case.

Authorities say Ulrich participated in encrypted chats with other Oath Keepers in the days before the riot, rode toward the Capitol with others in golf carts on that day and marched on the grounds in a military ‘stack’ formation.

They also say he taunted police officers who were guarding the building and entered the Capitol as hundreds of former President Donald Trump’s supporters sought to block the certification of Joe Biden’s election victory.

Asked by the judge whether he was pleading guilty because he was in fact guilty of the charges, Ulrich answered, ‘Yes, your honor.’

Ulrich is the second Oath Keepers member to plead guilty to seditious conspiracy and obstruction charges.

Joshua James, 34, of Alabama pleaded guilty in March and is also expected to cooperate with prosecutors against other alleged conspirators.

Out of hundreds of prosecutions, the case against the 11 Oath Keepers is the only one alleging participants in Capitol riot engaged in seditious conspiracy, which is defined as attempting ‘to overthrow, put down or to destroy by force the government of the United States.’

The seditious conspiracy prosecution is the boldest publicly known attempt so far by the government to prosecute those who attacked the U.S. Capitol.

A sentencing hearing has not yet been set, and Ulrich will be in federal custody until that hearing.

As part of the plea agreement, Ulrich has agreed to cooperate with the U.S. Justice Department’s ongoing investigation.

The Oath Keepers charged with seditious conspiracy are accused of working together to use force to stop the peaceful transfer of presidential power.

Authorities say the militia members discussed their plans in encrypted chats, traveled to the nation´s capital from across the country, organized into teams, used military tactics, stashed weapons in case they felt they were needed and communicated with each other during the January 6 riot.

Prosecutors say the group set up a ‘quick reaction force,’ or QRF, that kept guns at a hotel in nearby Arlington, Virginia, and that they were prepared to bring the weapons into Washington if Rhodes or associates believed the need arose.

Days before the attack, one defendant suggested getting a boat to ferry weapons across the Potomac River. In the end, the QRF teams didn’t bring guns into Washington.

More than 780 people have been charged with federal crimes related to the January 6 riot. Over 250 of them have pleaded guilty, mostly to misdemeanors. About 160 of them have been sentenced.