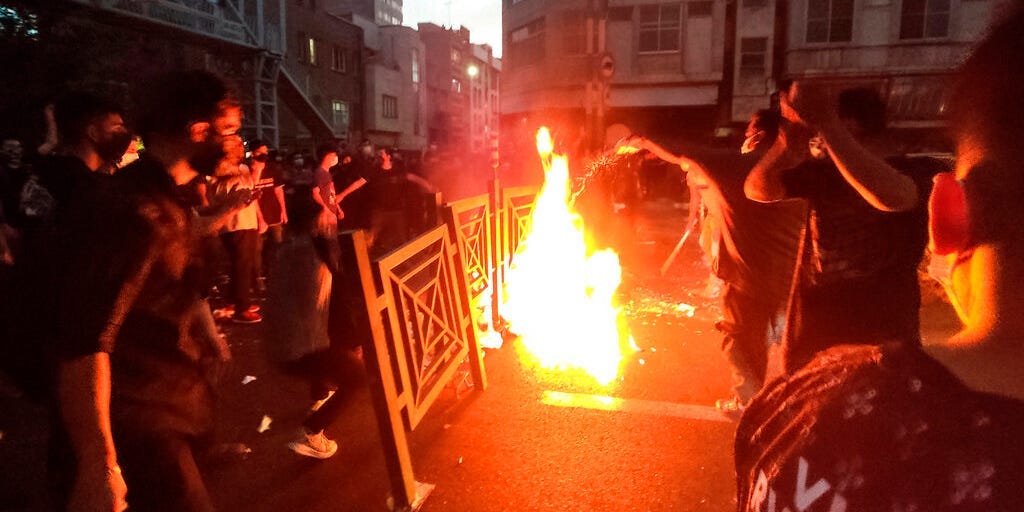 A young female protester died during the protests, which has drawn internet attention and condolences as anti-government demonstrations continue to take place around Iran in the wake of the death of 22-year-old Mahsa Amini in police custody.

After allegations surfaced that Hadis Najafi, a 20-year-old who often shared content on social media, had been slain by security personnel in the city of Karaj, she became a symbol of the demonstrations.

Thousands of users have liked and commented on Najafi’s photographs and videos on her TikTok and Instagram accounts, which have now become tributes to her life and pages in support of the protests. Over 16,000 comments have been left on Najafi’s last post, which was published on September 5. These comments are all tributes to her.

According to The New York Times, the demonstrations started on September 16 and have already extended to 80 Iranian towns. According to The Guardian, police have opened fire on protestors, and state media has reported that at least 41 people have died in the demonstrations so far. Massive crowds have rallied in favor of the late Amini, who was detained for allegedly violating Iran’s laws requiring women to wear the hijab, and demanded that the government give women more freedom.

The internet is being taken over by women and younger people in protest of Amini and Nafaji’s killings.

Even with a massive internet blackout in Iran, which mirrors prior efforts by the leadership of the nation to stifle widespread opposition, the online responses to Amini and Najafi’s killings and the continuing demonstrations have been fierce. Reporters have been informed by activists that Iranians use a variety of techniques, such VPNs, to get around internet filtering.

Millions of moments have been spent sharing many pictures and videos from the demonstrations online. Women are shown burning head scarves in a fire while being cheered on in a popular video with over 10 million views. Additionally, video of a lady cutting her hair at the burial of her sister, who was allegedly slain in the demonstrations, was extensively posted on social media.

The fact that these rallies are being led by a younger and more technologically savvy generation than in prior years is what distinguishes them from Iran’s lengthy history of protests, according to Holly Dagres, a nonresident senior fellow at the Atlantic Council.

Dagres spoke to “the young, Iranian Gen Z, who are leading these rallies and declaring they no longer want an Islamic Republic.”

Videos of teenagers rushing the streets and mobs of people holding posters and waving flags to protest the hard-line administration have been flooding social media platforms over the last week. People can be heard yelling “death to the dictator” in other videos that have become popular. To demonstrate support for Iranian women battling against the hijab regulations, Iranian and Muslim women all over the world have started a trend on TikTok where they chop off their hair and rip off their hijabs.

In the meanwhile, several prominent figures from various nations have posted statements online supporting the Iranian people. In announcing fresh sanctions against Iran, Justin Trudeau, the prime minister of Canada, vowed to “stop at nothing to guarantee that this government is held accountable.” Holding “Iranian authorities responsible for the needless killing of Mahsa Amini and other human rights atrocities,” as US Vice President Kamala Harris put it in a tweet last week.

In a nod to the outrage after Amini’s murder, Najafi is now serving as a focal point for demonstrators. Tens of thousands of people are like and commenting on her Instagram pictures, her name was included in about 10,000 tweets in a single hour on Monday afternoon, and her admirers have submitted several artwork and films in her honor.

After her sister was killed, Najafi’s elder sister also published a video of the burial, which in the less than a week it was online earned over 270,000 likes. Najafi’s name has gained popularity as a hashtag on social media for protest information and calls for reform.

Using the hashtags for Najafi and Amini’s names, one Twitter user remarked that “every woman on this globe must have the option to choose.” “What you should and shouldn’t wear. without experiencing abuse or repression.”

A viral video said to be of Najafi went viral, but it wasn’t really of her.

Even while the majority of postings that mention Najafi just feature her name or a picture of her, many of them also included a video of a lady tying up her ponytail in a dark street.

On Sunday and Monday, the video was extensively shared. Many people said it showed Najafi strolling on the street without a head scarf in dissent against the government. According to many media, the real lady in the video has now come forward and denied being Najafi. Despite identifying herself in the video, the lady said on BBC Persian that she would fight for the “Mahsas and Hadis.”

Dagres said why Najafi has become a symbol for demonstrators, even if the viral video didn’t really show her: “Gen Z is spearheading the demonstrations in Iran right now and to see a beautiful, young lady murdered down in cold blood by security forces would move anybody.” Many Iranians were moved by the footage of the young lady tying her hair in a battle-ready manner, for whatever reason.