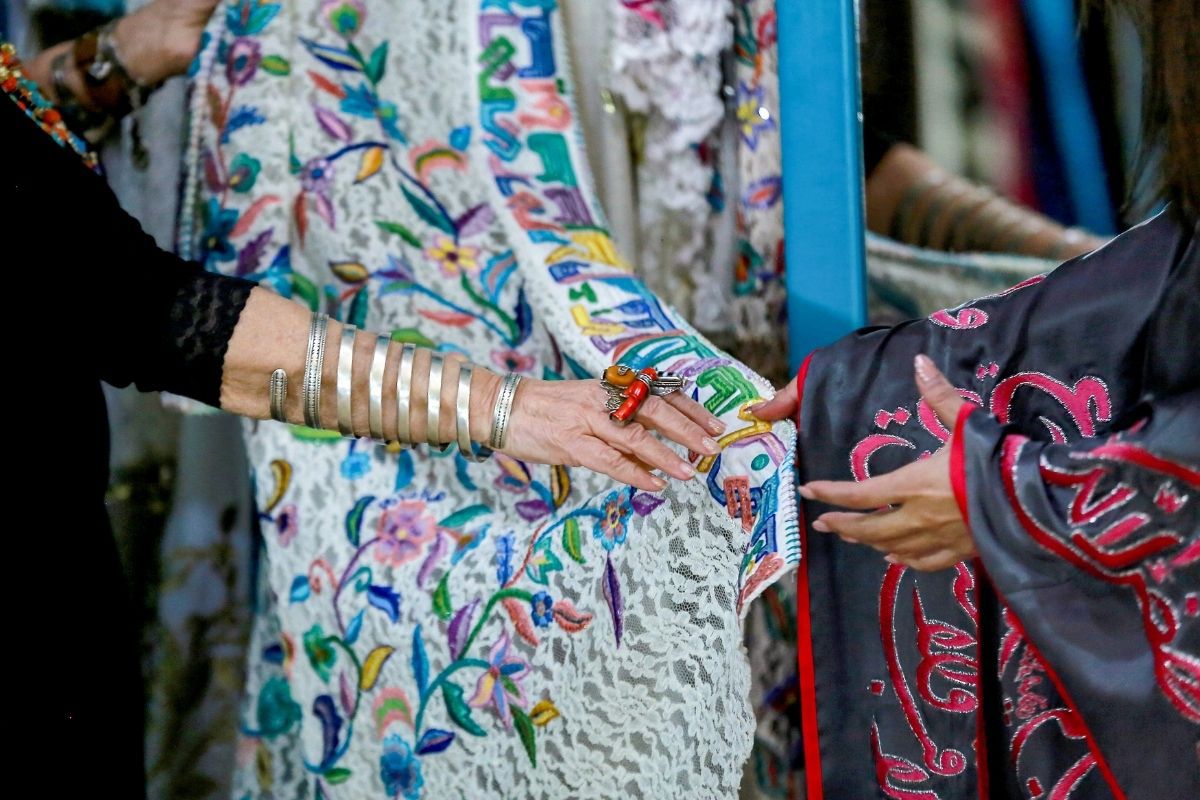 With verses from love poems and flowing calligraphy, Jordan-based fashion designer Hana Sadiq stitches a testament to the beauty of Arab women.

In a career spanning decades, Iraqi-born Sadiq has shown her creations worldwide and dressed the stars, but she remains rooted in the traditions of her homeland.

The artistic handwriting of Arabic script dominates her embroidered modern designs, with poetry or letters scattered in bright colours.

She uses various calligraphic styles, from the elaborate Diwani to the curving Thuluth and features on some of her outfits the lines of renowned Arab poets including Mahmoud Darwish and Nizar Qabbani.

“Arabic calligraphy is the most beautiful,” says Sadiq, 72, showing off her love of jewellery with strings of beads around her neck, dangling earrings, and unusual stone rings.

At her home workshop in downtown Amman, Sadiq notes that the earliest writing was born several millennia before Christ in what is now Iraq, arguing that it was a place “without which all the other civilisations would not have existed”.

Sadiq has split her time between Amman and Paris since 1982, having both French and Jordanian nationality as well as Iraqi citizenship.

HANA SADIQ HAS DESIGNED FOR CELEBRITIES AND ROYALS

She has exhibited from Europe to the United States as well as the Middle East, returning home with an extensive collection of antique silver ornaments, along with thousands of pieces of Arab textiles and costumes.

They reflect the influence of her grandmother who wore a traditional Iraqi “Hashemite dress” and walked “elegantly like a peacock”.

The folk outfit is made of very thin fabric with wide sleeves and transparent sides, decorated with beautiful floral ornaments, golden or silver, on a black base.

Sadiq traces her interest in fashion to her childhood, when she would visit her grandfather’s textile shop in Baghdad.

She went on to design for celebrities and royals, including Jordan’s Queen Rania and Queen Noor.

But whoever the client, her work has been guided by pride in the Arab woman’s femininity.

Unlike more revealing Western fashion, her designs envelope the woman’s body, “but it shows high femininity,” says Sadiq, who is also the author of a book, Arab Costumes and Jewelry, a Legacy without Borders.

She argues that Western clothes are not the best fit for the bodies of Arab women but have spread to the region anyway.

“Unfortunately this is the result of globalisation,” she says.

“What matters to me, in all my work, is that the woman remains female and that a man is attracted to her as a female,” she adds. “Which means when a woman passes in front of him, he must notice and see how beautiful she is.”