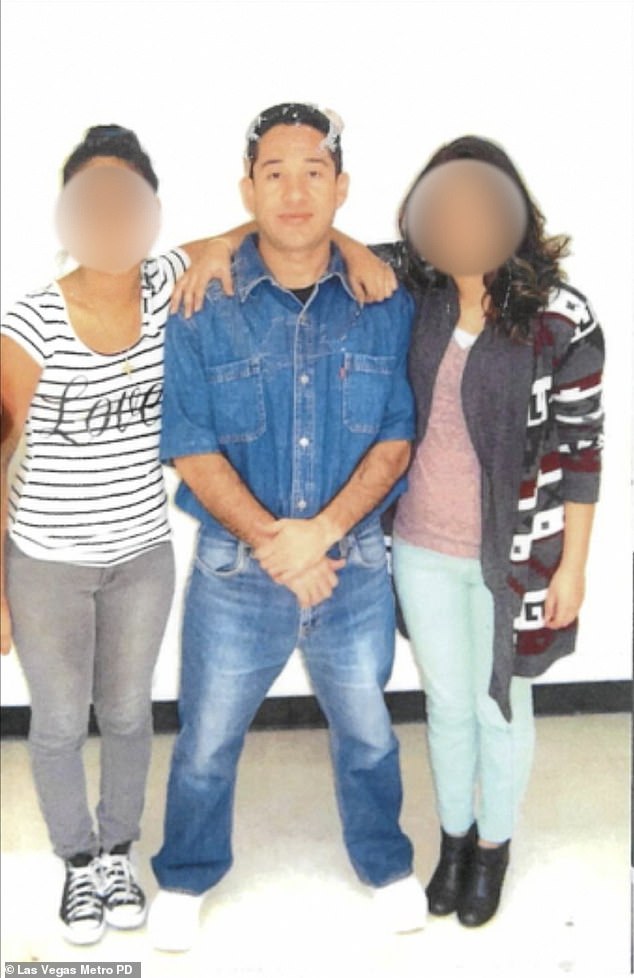 A man who killed a casino hot dog seller as part of a revenge plot more than a decade ago escaped his cell using battery acid and a cardboard dummy, fooling prison staff and gaining a considerable head start.

Porfirio Duarte-Herrera, 42, was on the lam since Friday, September 23, according to authorities, but officers at the Southern Nevada Correctional Center did not realize he was missing until the following Tuesday.

On Thursday, he was apprehended attempting to flee to Tijuana on a bus after shuttle workers observed something unusual about a passenger.

A jury found the 42-year-old and his co-defendant, Omar Rueda-Denvers, guilty in 2010 of murdering Willebaldo Dorantes Antonio, 24, in 2007 with a homemade pipe bomb concealed in a coffee cup.

According to Fox 5, Duarte-Herrera used battery acid to destroy the window frame of his cell and constructed a decoy ‘perhaps out of cardboard’ to deceive prison staff into thinking he was still inside.

The inmate subsequently escaped via a perimeter fence near a prison tower that should have seen Duarte-Herrera but had been unmanned for several years.

Joseph Lombardo, sheriff of the Las Vegas Metropolitan Police Department, stated that Duarte-Herrera was guilty of “cold-blooded homicide” and that he feared for the safety of the public, his staff, and the victims of his crime.

Porfirio Duarte-Herrera, 42, had been on the run since Friday, September 23, but it wasn’t until Tuesday, September 26, that police realized he was gone.

Thursday, the 42-year-old was detected attempting to flee to Tijuana on a bus when shuttle employees spotted something unusual about one of their passengers.

Duarte-Herrera allegedly used battery acid to destroy the window frame of his cell and ‘maybe’ constructed a cardboard dummy to fool jail staff.

In 2007, he planted a pipe bomb in a coffee cup and was sentenced to life for murder. It was a cold-blooded and exceedingly calculated murder,’ he claimed.

We were concerned about threats to the public and the individuals involved in the initial case because desperate people do desperate things.

We were also afraid that our officers would encounter him in the course of their daily duties.

Federal authorities offered a large reward of $30,000 to anyone with information leading to the suspect’s capture.

Fox 5 was informed by Las Vegas Shuttles that police had arrived to distribute fliers of the escaped murderer and to be on the watch for him.

Within twenty-four hours, Duarte-Herrera was apprehended attempting to travel to Tijuana, Mexico on a flight scheduled for Thursday at 10 p.m.

The dispatcher contacted the police after an employee became suspicious of one of their customers and informed the general manager of Shuttle Services, Gabriel Delgadillo, who checked security cameras to confirm that it was him.

He told a local television, “I encouraged her to play along and keep everything as normal as possible, and that I would take care of whatever comes next.”

And that’s how I conveyed the situation to 911, and the cops did what they needed to do without alarming our passengers or causing any tension.

Duarte-Herrera can be seen in arrest film wearing a crimson long-sleeved shirt with blue sleeves and a dark-colored cap obscuring his eyes.

A police officer is heard inviting a man to speak with him.

“Hey man, what’s up? Hey, can we talk? Are you carrying identification?’ asks the officer.

Duarte-Herrera, who appears confused, informs the officer that he has identification while another police ushers him onto the bus.

The second cop arrests Duarte-Herrera by removing his backpack and placing his arms behind his back.

The first officer is then heard shouting “don’t be dumb” to Duarte-Herrera, who is immediately placed in handcuffs and placed in a nearby police car.

The officer then instructs escorting cops to keep an eye on Duarte-Herrera and proceeds to question him about ‘who’s idea’ the escape was.

Duarte-Herrera responds, “Mine,” while his arms are shackled behind his back.

He responded, “I was headed to Tijuana,” when asked where he was going.

Duarte-Herrera responded that he merely had clothing in his backpack in response to the officer’s inquiry regarding the presence of weapons.

At the conclusion of the body camera clip, one officer can be heard saying, “He was outside and prepared to board the shuttle.”

U.S. Marshal for Nevada Gary Schofield stated that investigators were continuing to investigate where Duarte-Herrera was and what he did between his escape and capture.

Federal authorities offered a large reward of $30,000 for information leading to the capture of the culprit.

Authorities have stated that they are still investigating how the convicted bomb-maker escaped from a Nevada prison without anyone noticing.

Lombardo stated that the policies, procedures, and all failures that occurred between Friday and Tuesday must be corrected.

Lombardo, a Republican seeking to oust Democratic Governor Steve Sisolak in November’s election, said he was urging Sisolak to follow through on his promise to conduct a thorough investigation to ensure that the incident does not occur again.

Infrastructure concerns and jail system staffing issues, the ability for this man to do it as easily as he did it – according to what I’ve been informed – are of severe concern to me, the entire law enforcement community, and the community as a whole, he said.

Lombardo, the U.S. Marshall for Nevada and an FBI special agent, stated that his capture was the result of the cooperation of several law enforcement agencies, substantial media coverage, and a tip from the public.

We were able to catch him with the help of the people since he remained in the vicinity, both thankfully and tragically.

Lombardo responded affirmatively when asked by a reporter if DOC had been invited to participate in the joint law enforcement news conference.

Sisolak launched an investigation into the escape when his office learnt that Duarte-Herrera had been absent since the beginning of the weekend, as he stated late Tuesday.

The governor is working directly with Department of Corrections Director Charles Daniels, according to a statement from the governor’s office, “to ensure swift action is done to address the conduct that led to the escape.”

Duarte-Herrera can be seen in arrest film wearing a crimson long-sleeved shirt with blue sleeves and a dark-colored cap obscuring his eyes.

A clearly perplexed Duarte-Herrera informs the officer that he has identification while another police ushers him onto the bus.

Duarte-Herrera is promptly cuffed and placed in a neighboring police vehicle.

The officer then orders following cops to keep an eye on Duarte-Herrera and proceeds to interrogate him, asking, “Whose idea was the escape?” Duarte-Herrera replies, “Mine.”

When public safety is at issue, it is inexcusable to disregard protocols and procedures. Beyond this instance, the governor’s first concern is to solve larger-scale staffing problems,’ said his communications director Meghin Delaney.

She stated, “Correctional facilities across the country are experiencing staffing shortages, and the NDOC is exploring innovative strategies to enhance recruiting at all facilities in this state.”

Neither Lombardo nor Sisolak would comment on a KLAS-TV allegation citing unidentified sources claiming Duarte-Herrera used acid to degrade the area guarding his cell window so that he could escape.

According to the story, he also constructed a cardboard mannequin for his cell and sewed a coat in a prison class, which he carried with him following his escape. Officials investigated whether he had a partner in crime.

Lombardo stated that he met with the inspector general’s office at the Department of Corrections, and he is certain that they will investigate and deploy resources to prevent a recurrence.

Nicaraguan national Duarte-Herrera was convicted in 2010 of murdering a hot dog vendor by placing a motion-activated device in a coffee cup atop a parked automobile at the Luxor hotel-casino.

According to the records, Omar Rueda-Denvers, his co-defendant, remains in detention. The 47-year-old Guatemalan is serving a life term for murder, attempted murder, explosives, and other offences at a different Nevada jail.

In the murder of Willebaldo Dorantes Antonio, who was identified by prosecutors as the lover of Rueda-Denvers’ ex-girlfriend, a Clark County District Court jury spared both men the death penalty.

The top level of a two-story parking facility was attacked, according to the prosecution, out of envy. The explosion prompted immediate worries of a terrorist attack in the Strip.

Gary Schofield, the United States Marshal for Nevada, stated that investigators were still investigating where Duarte-Herrera was and what he did between his escape and when he was dropped off near the transit hub.

Tuesday afternoon, Schofield’s office was told of the escape by a regional task team of the U.S. Marshals Service stationed in Los Angeles, which had been notified of the breakout by state correctional officials.

It was the first time any Nevada authorities were aware of what was happening at the prison, he claimed.