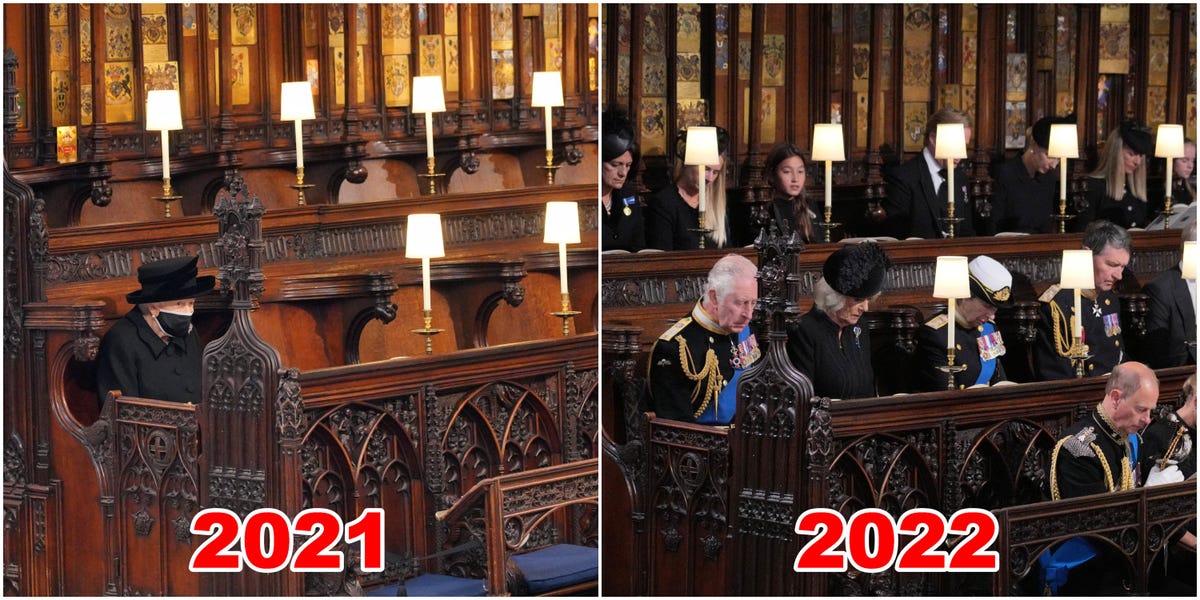 King Charles III sat in the same spot for his mother Queen Elizabeth II’s burial on Monday as he had for that of her late husband, Prince Philip, a year earlier.

According to Yahoo! News UK, the royal family complied with COVID-19 rules during the event in April 2021, which prohibited members of other households from mingling and limited attendance to 30 persons. For others who also lost a loved one to the epidemic, seeing the Queen sitting by herself in St. George’s Chapel at Windsor Castle while wearing a black face mask acted as a sorrowful reminder.

Charles was seen with an open seat in front of him at the same spot 17 months later, much like his mother. He sat close to his sister, Princess Anne, and her wife, Queen Consort Camilla.

Over 2,000 royals, celebrities, and foreign leaders travelled to London this weekend for the Queen’s funeral, which got underway at Westminster Abbey on Monday morning. The week before to the occasion, members of the royal family were busy paying tribute to the Queen in different ways.

Charles also wrote a message as a memorial to his late mother, which read: “In cherished and loving remembrance. R. Charles “on the wreath that adorned her casket. Rex, which is Latin for “king,” is what the “R” stands for, according to The Washington Post. The monarchs generally sign off their communications with the initial, according to the site.

The wreath itself had allusions to the Queen and Philip’s union. According to a tweet from a royal family representative, the myrtle in the wreath was plucked from a plant that was cultivated from the Queen’s bridal bouquet.

Since the Queen’s demise on September 8 at Balmoral, hundreds of thousands of mourners have also sent flowers, gifts, and personal notes for her and her family. For the royal family to read later, letters and drawings from the public were gathered, according to a Metro story.

The Queen’s funeral used the flowers that had been left for the Queen. Officials are seen in a video from The Royal Family Channel on YouTube taking the flowers and precisely arranging them at the top of the Long Walk in front of Windsor Castle. On its approach to the palace on Monday, the Queen’s hearse went by the exhibit, according to an earlier Insider story.