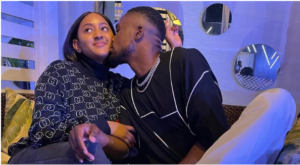 Popular comedian and skit maker Josh Alfred popularly known as Josh2Funny and his wife, Bina welcomed their first baby together.

The skit maker shared the big news via his Instagram page on Tuesday, April 26.

“Me and Loml @binataste and one other person

he captioned the photos of himself and his pregnant wife.

Josh2funny, who was born on December 18, 1990, grew up in Mushin, Lagos State, and began his comedy career there.

His primary and secondary studies were in Lagos, and he had his graduate studies at the Federal Science and Technical College in Yaba, where he studied computer science.

He is unarguably one of Nigeria’s biggest skit makers

Josh2Funny proposed to his wife back in 2019.

“Them don collect me oooooo

he wrote at that time as his caption.

The couple tied the knot in 2020 and now have their first baby.