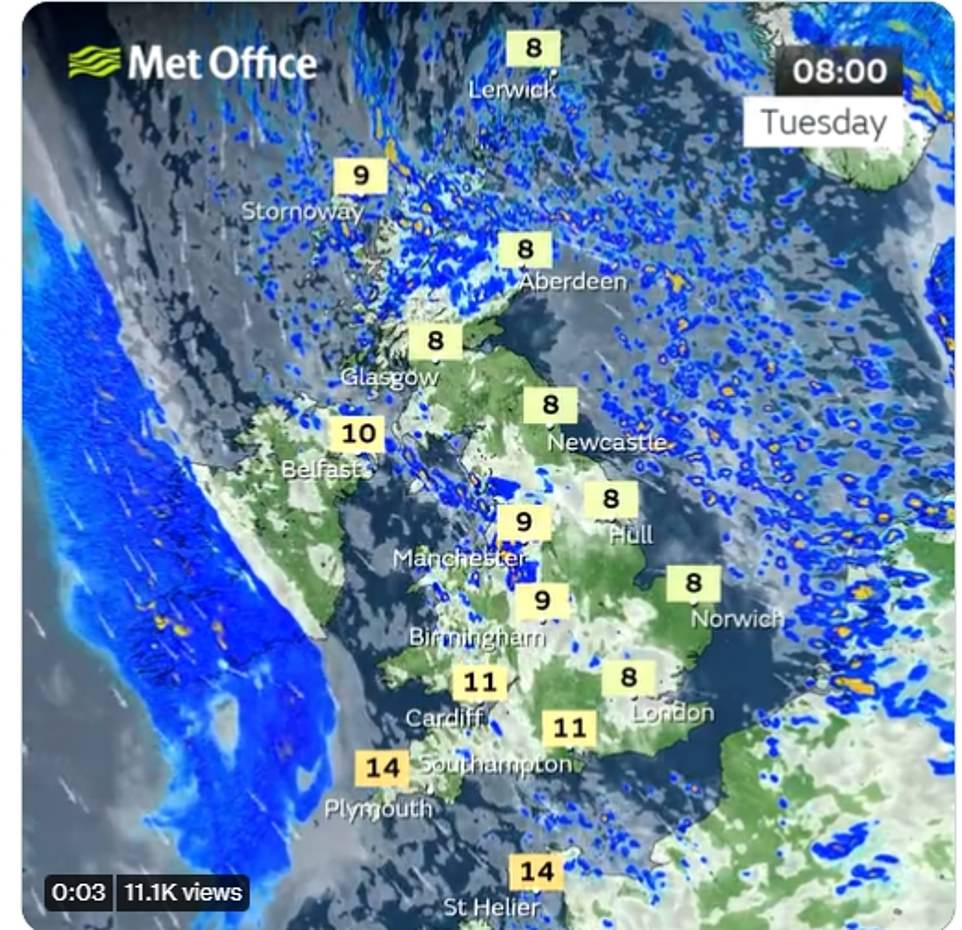 This week, the UK is likely to see thundery rains and frosty weather as Hurricane Fiona’s leftovers approach the country and bring gale-force winds.

Unseasonably chilly weather, heavy rain, and blustery gusts of wind are expected to strike several sections of the nation on Friday.

The information was released at the same time as the Met Office today issued a series of six flood advisories for coastal villages in Yorkshire, Norfolk, and Essex.

Tuesday morning may see tidal flooding in the North Sea settlements of Withernsea, Kilnsea, and Easington in East Yorkshire and County Durham.

The Essex coast from Clacton to St Peters Flat, the Colne and Blackwater estuary, and the North Norfolk coast from East Cley to Kelling Hard, including Salthouse, are also at danger. Flood warnings are in effect here between 12.30pm and 2.30pm on Tuesday.

Although small, the floods are among the first symptoms of the shifting weather, which is forecast to become worse as the week goes on with Friday looking to be the worst.

Parts of Scotland are expected to experience gales, with Stornaway, Wick, and Kirkwall in the Orkney Islands expected to see gusts of around 50 mph on Friday between 10 am and 1 pm.

The worst of the weather is predicted to arrive around 10 p.m. on Friday in Brighton, which is located on the south coast of England.

The Met Office has said that the miserable weather will come as a “shock to the system” for Brits after the previous record-breaking summer heatwaves.

Forecasters warned The Sun that on certain mornings, drivers could need to scrape the frost off of their automobiles.

Although temperatures will be below normal, the weather will be fairly typical of October.

But after our summer, it will be a shock to the system.

According to Carol Kirkwood of the BBC, a weather front will originate in Scotland’s north and move through the rest of the UK, bringing rains to much of the nation.

She predicted that the weather will be chilly, windy, and showery once again.

This morning, Scotland will see rains that might eventually become thunderous.

“And we also have more showers moving through the Midlands and Wales from the North Channel.” Some are, as you can see, also present on the east coast.

The weather is expected to be cold, windy, and showery once again, she said.

The “colder-than-average” weather started on Monday, with the lowest temperature of 5C occurring early on Tuesday morning.

Today’s forecasted national average temperature in the UK is 8C.

Regarding the remainder of the week, the Met Office said that Wednesday will continue to be pretty chilly with a mix of sunshine and showers, but with fewer winds than the previous days.

Before a dry and cold morning on Friday with patches of mist and fog, Thursday will feel a little milder thanks to lighter winds.

On Friday, the windiest and wettest weather is predicted.

There will be some sunlight in most places, but clouds and heavy rain will move from west to east over the nation.

A deeper region of low pressure seems to be moving towards the northwest of the UK on Friday, according to Daniel Rudman, deputy chief meteorologist at the Met Office.

This implies that people may anticipate a very rainy and windy stretch on Friday, lasting longer than anything we’ve seen so far this fall. However, given the season, this is not at that unexpected.

The Met Office also noted that forecasting was more difficult due to the Atlantic’s tropical storm season, which had towns along the east coast of America under severe weather conditions.

Daniel said, “However, knock-on effects from the Atlantic tropical cycle season may diminish confidence when predicting more than a few days ahead, and hence the precise dates for rainfall and wind intensity for Friday may shift during the week.”

Making sure you always use the most recent forecast is the greatest thing you can do if you have outside plans.

A warning has also been issued to drivers in advance of the deteriorating weather.

The operations director for customer services at National Highways, Andy Butterfield, advised: “It’s always a good idea to plan your trip in advance, which is crucial if you are traveling on roads you are unfamiliar with.”