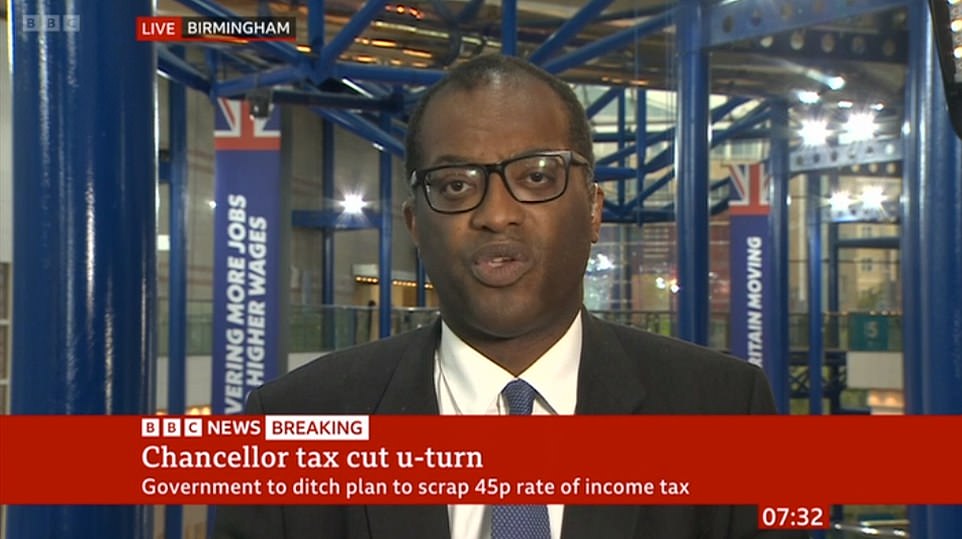 To prevent a significant Tory uprising, Liz Truss and Kwasi Kwarteng today made a remarkable U-turn on their intentions to eliminate the highest tax rate.

After it became evident that dozens of MPs would refuse to support the proposal in the Commons, the Prime Minister and the Chancellor decided not to eliminate the 45p rate for taxpayers who earn more over £150,000 annually.

The radical change came when Michael Gove and Grant Shapps asserted their leadership in the uprising and warned that the proposal would be a “major distraction” and politically poisonous to average people.

Just yesterday, Ms. Truss appeared on television to defend the proposal and rule out a change of heart, but she was also accused of putting Mr. Kwarteng “under the bus” by claiming that he had taken the choice to go forward.

In spite of the subsequent upheaval on the markets, Chief Secretary Chris Philp said he would rate the Budget “9.5 out of 10” when speaking with other ministers about the plan.

Mr. Shapps had denounced the notion as “politically tin-eared,” and according to insiders, Ms. Truss “may be gone by Christmas” if she didn’t give in to “livid” MPs.

It is believed that changing course on the policy would increase Tory support for the other mini-Budget initiatives.

‘The 45p dispute is becoming a major distraction that is drowning out all the other critical and urgent items in the Budget,’ a senior Whitehall official told the Daily Mail.

According to government sources, MPs won’t be asked to vote on the contentious legislation until after Chancellor Kwarteng releases the government’s economic plan on November 23, which should specify how the decision would be paid.

On the opening day of the conference in Birmingham, Michael Gove spearheaded demands for the Prime Minister and her Chancellor to abandon the proposal to remove the 45p tax rate.

While acknowledging that the mini-Budget was handled incorrectly and that ministers should have “laid the ground” better, Miss Truss vowed she would not alter her approach.
When Miss Truss claimed that Mr. Kwarteng alone was responsible for the decision to eliminate the 45p income tax rate, former minister Nadine Dorries said that she was “throwing Mr. Kwarteng under the bus.”
The Prime Minister promised to guarantee that the state pension increases in step with inflation in the next year, but she balked at promising the same for benefits.
Jake Berry, the chairman of the Conservative Party, issued a warning that any MP who voted against the Budget would be expelled from the organization.
Outside the convention yesterday, protestors yelled “Tories out” at two top Conservatives, who required police escorts.

In his first conference address as Chancellor, a defiant Mr. Kwarteng is anticipated to promise to “keep the course” with his plans, claiming that Britain has been in a condition of “slow, controlled decline” for years and that this must be corrected.

The price of shoring up Tory support for the remaining mini-Budget initiatives is drowning out all the other critical and urgent items in the Budget, it was reported last night, and he and Miss Truss may decide to reverse course and abandon the 45p strategy.

This morning, sources verified the U-turn.

One source said that up to 70 Conservative MPs are now pressuring Ms. Truss to put off eliminating the 45p rate for a year after contemplating voting against the scheme.

The decision was scheduled for a vote by MPs as early as next week, but the delay has led to rumors that the policy may also be postponed.

Additionally, the delay gives Ms. Truss more opportunity to lobby her MPs and supporters for support of the proposal. In a similar vein, it provides insurgents more time to organize.

If Sir Keir Starmer proposes either an opposition day resolution or an emergency debate to overturn the tax reduction, the rebels apparently plan to vote with the Labour Party.

Mr. Gove said yesterday that using “borrowed money” to pay for eliminating the 45p income tax rate was “not Conservative.” The government shouldn’t be giving “huge gifts to people who need them least,” Mr. Shapps said in agreement with him.

The charges that Mr. Gove is working as an agent for Rishi Sunak, whom he endorsed against Miss Truss in the Tory leadership contest, have been questioned in response to his involvement.

After Mr. Gove referred to the Government’s proposal to eliminate the highest tax rate as “a show of the wrong principles,” a number of other MPs who support Sunak come out against it.

Mr. Shapps, who also supported Mr. Sunak, stated in a piece published in The Times today that “this politically tin-eared cut, not even a huge revenue raiser and hardly a priority on the prime ministerial to-do list, has managed to alienate almost everyone,” including “the City traders who will actually benefit.”

Senior Tories issued a warning last night that Mr. Gove’s actions might further harm the party, which is currently lagging Labour in the polls.

One source at No. 10 called the former minister “deluded.”

Another ally called it “massively harmful, but regrettably not a surprise” that he chose to go to the conference and criticize the Government’s plans.

Sir Iain Duncan Smith, a former leader of the Tories, charged Mr. Gove of a pattern of disloyalty in reference to his part in removing Boris Johnson from No. 10.

Michael Gove is out there stabbing her in the back on Sunday, the first day of conference for a new Tory leader, the speaker said. Isn’t the removal of one prime minister sufficient for him?

He poses a risk to individuals and the party, therefore someone has to seize his knives. He claimed to be quitting politics, but it turned out to be a lie, and now he’s back and seeking to topple a new PM.

The contentious tax decrease was “part of a larger package of making our tax system simpler and lower,” the Prime Minister had said yesterday. But she emphasized that in comparison to the Energy Price Guarantee, which might wind up costing £150 billion, it was a very small Budget policy.

Mr. Gove said it was one of many “mistakes” the PM and Mr. Kwarteng had made during an appearance on the BBC’s Sunday With Laura Kuenssberg program, which had left him “profoundly” worried.

When asked whether he would vote in favor of the mini-Budget if it remained intact, he said, “I don’t feel it’s right,” as an answer.

It’s going to be very, very, very tough to claim it’s acceptable to lower welfare when we’re simultaneously decreasing tax on the richest, he said during a series of subsequent appearances on the conference fringe.

‘When people have seen the complete package, including the supply side measures to support economy and the pledge to limit debt, we are certain they will feel differently about this,’ said a Tory source, expressing displeasure with Mr. Gove’s attempt to incite opposition to the tax reduction.

A Mr. Gove acquaintance argued that he was not operating on behalf of Mr. Sunak or anybody else and disputed that he was trying to harm the government.

He’s just doing what he believes is right. I believe he is speaking on behalf of a sizable number of MPs, but he is not working with anybody, the person said.

However, Mr. Gove said yesterday that using “borrowed money” to pay for eliminating the 45p income tax rate was “not Conservative.” Grant Shapps, a former transport minister, echoed him yesterday night when he said that the government shouldn’t provide “huge handouts to people who need them least.” The charges that Mr. Gove is working as an agent for Rishi Sunak, whom he endorsed against Miss Truss in the Tory leadership contest, have been questioned in response to his involvement.

After Mr. Gove referred to the Government’s proposal to eliminate the highest tax rate as “a show of the wrong principles,” a number of other MPs who support Sunak come out against it.