Ukrainian soldiers vowed to ‘fight until the end’ after Russia issued a chilling warning to the final troops defending the besieged city of Mariupol – but Volodymyr Zelensky warned the Kremlin is trying to ‘destroy everyone there’.

Russia gave Ukrainian soldiers an ultimatum to ‘surrender or die’, urging them to lay down their arms by 6:00 am Moscow time (0300 GMT) and to evacuate before 1:00pm, on Sunday after the Russian Defence Ministry claimed their troops had cleared the urban area of the city – with only a small unit of Ukrainian fighters remaining in the giant Azovstal steelworks in the south-eastern port.

In a statement, the defence ministry said: ‘The Russian Armed Forces offer the militants of nationalist battalions and foreign mercenaries from 6am (Moscow time) on April 17, 2022, to stop any hostilities and lay down their arms. All who lay down their arms are guaranteed that their lives will be spared.’

But with the last Ukrainian fighters in Mariupol refusing to surrender and accept Russia’s now-expired ultimatum,  the Ukrainian MP for Odesa, Oleksiy Goncharenko, told BBC News the last defenders will ‘fight until the end’.

He said: ‘I spoke with them yesterday, and I know that they’re going to fight until the end.’

Goncharenko referred to the continuing siege of Mariupol as ‘a real genocide’ and said it was considered that ‘more than 20,000 people’ have been killed in the port city.

President Volodymyr Zelensky said the Kremlin ‘is deliberately trying to destroy everyone who is there’ and asked the West for more heavy weapons immediately to have any chance of saving the port city on the Sea of Azov as Russian air strikes continue.

‘Either our partners give Ukraine all of the necessary heavy weapons, the planes, and without exaggeration immediately, so we can reduce the pressure of the occupiers on Mariupol and break the blockade,’ he said, ‘or we do so through negotiations, in which the role of our partners should be decisive.’

Were it to fall, it would be the the first major city to be taken by Russian forces since the invasion began on February 24.

In Kyiv, renewed Russian air strikes hit an armaments factory, despite Moscow shifting its military focus to gaining control of the eastern Donbas region and forging a land corridor to already-annexed Crimea.

‘During the night, high-precision, air-launched missiles destroyed an ammunitions factory near the settlement of Brovary, Kyiv region,’ Russia’s defence ministry said, the third such air strike near the capital in as many days.

Ukrainian Deputy Prime Minister Iryna Vereshchuk urged Russian forces to allow evacuations from Mariupol, which Moscow’s forces claim to have brought under their control, though Ukrainian fighters remain holed up in the city’s fortress-like steelworks.

Earlier, Mr Zelensky had told Ukrainian journalists that the situation in Mariupol, which has come at a horrific cost to trapped and starving civilians, could scuttle attempts to negotiate an end to the war.

A Russian Defence Ministry spokesman said on Saturday that Ukrainian forces had been driven out of most of the city and remained only in the Azovstal steel mill, where tunnels allow the defenders to hide and resist until they run out of ammunition.

The Russians already control what is left of the city after weeks of bombardment. Striking the steel plant to take the rest is part of Russia’s preparations for the anticipated assault in eastern Ukraine.

Moscow gave Ukrainian soldiers an ultimatum to ‘surrender or die’ by 3am GMT on Sunday after the Russian Defence Ministry claimed their troops had cleared the city – with only a small unit of Ukrainian fighters remaining in the giant Azovstal steelworks in the south-eastern port. Pictured: Illich Steel and Iron Works in the southern port city of Mariupol, Ukraine

Experts say the fall of Mariupol, seen as strategically vital for Russian plans to attack eastern Ukraine , is inevitable. But holdouts in their underground bases hope to make conquering the Sea of Azov port as hard as possible for the attackers. Pictured: An explosion is seen in an apartment building after Russian’s army tank fires in Mariupol

ian fighters are putting up a hellish last stand in tunnels under an abandoned Stalingrad-esque Azovstal steel plant (pictured) in Mariupol as Russian forces close in on the besieged port city. Pictured: The Azovstal Steel and Iron Works facility

Experts say the fall of Mariupol, seen as strategically vital for Russian plans to attack eastern Ukraine , is inevitable. But holdouts in their underground bases at the steelworks (pictured) hope to make conquering the Sea of Azov port as hard as possible for the attackers . Pictured: The view from inside the Azovstal Steel and Iron Works facilit

The Ukrainian MP for Odesa, Oleksiy Goncharenko (pictured), told BBC News that the last defenders in Mariupol won’t surrender to Russia. He said: ‘I spoke with them yesterday, and I know that they’re going to fight until the end’ 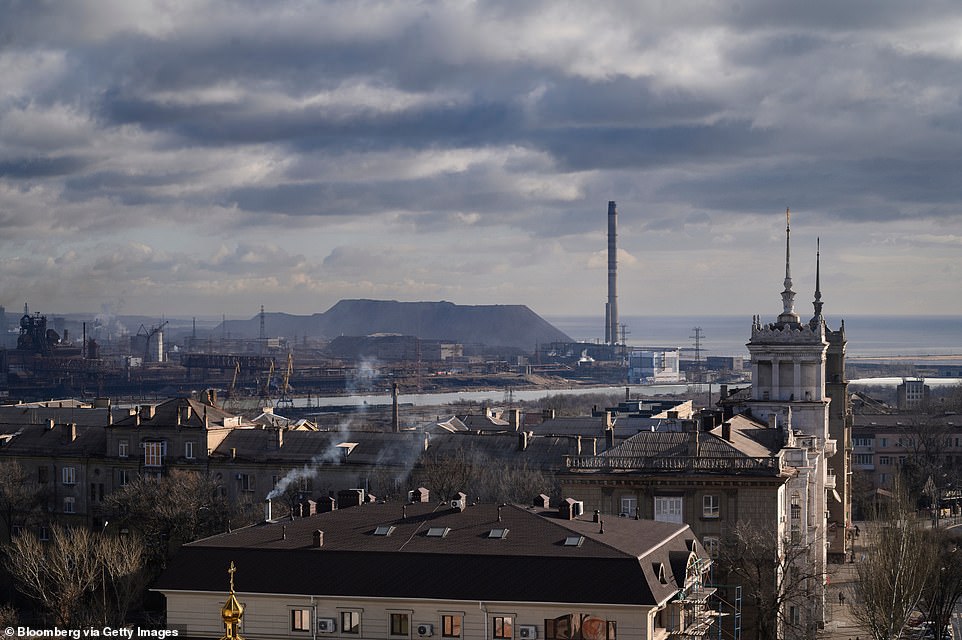 But despite the offer, there have been no reports of soldiers laying down their arms with Kyiv yet to respond to the statement – as Russian air strikes continue on Mariupol, according to Ukraine’s military 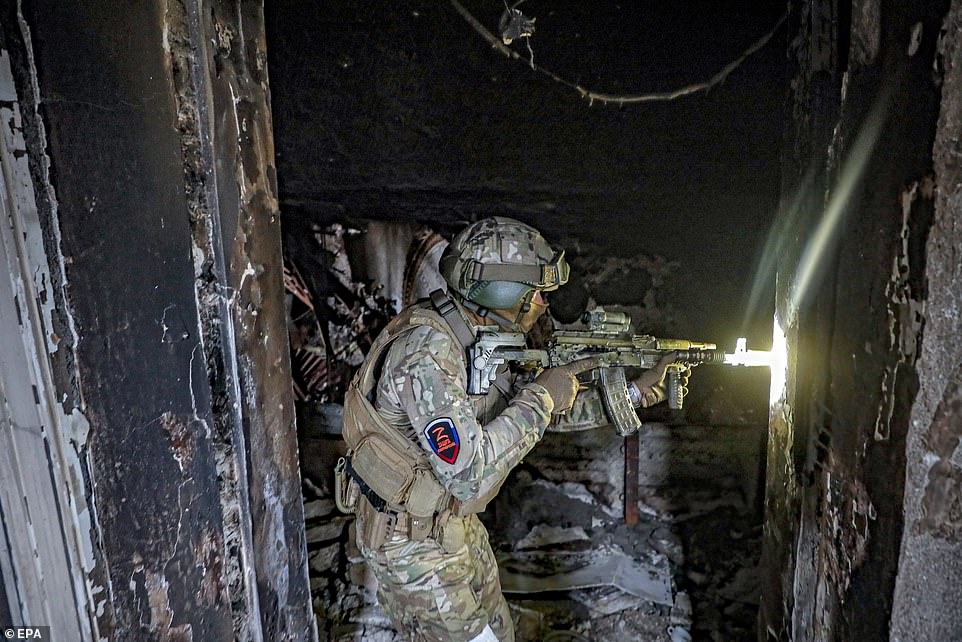 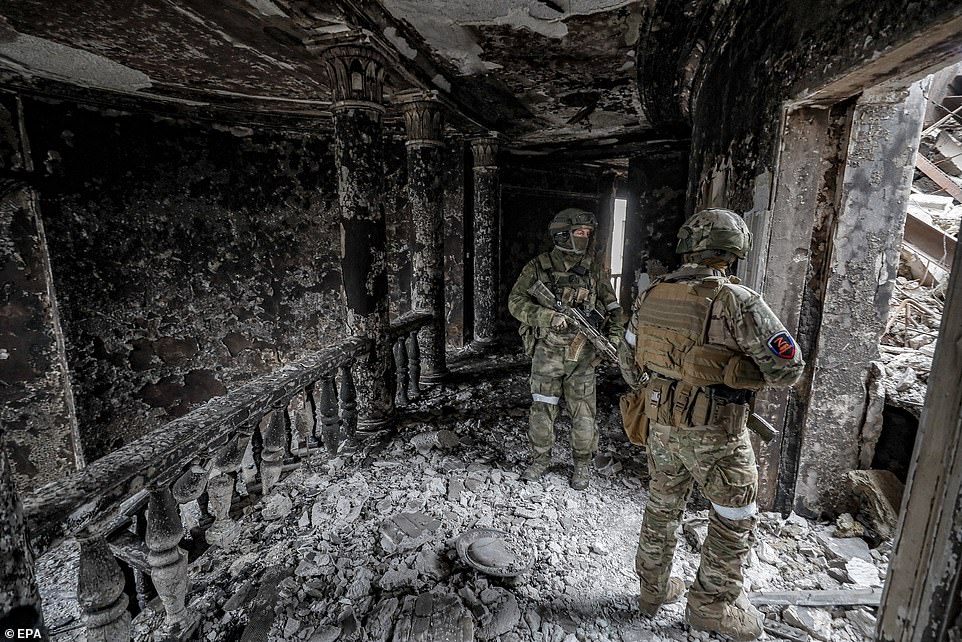 At least 300 people died when Mariupol’s drama theatre (pictured, Russian servicemen secure the destroyed building) was targeted in a Russian missile strike, despite being marked ‘children’