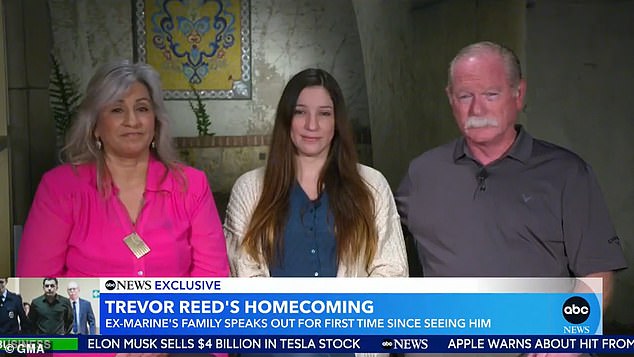 Freeing a captured ex-Marine from rotting in a hellhole Russian prison was always going to be tricky task.

But details of the rigorous negotiations the US faced getting Trevor Reed back to safety have now been revealed.

Dramatic events in the last two months helped facilitate the prisoner swap – including a private Oval Office meeting as well as a shadowy mission to Moscow.

Reed’s parents finally got the chance to plead their case with Joe Biden earlier this year amid horrifying reports their boy’s health was rapidly declining.

Meanwhile a diplomat was deployed on a top secret trip to Russia – despite Vladimir Putin ramping up plans for his brutal invasion of Ukraine.

The hero ex-soldier finally returned home to Texas after three years languishing in prison over allegedly attacking a police officer.

But his fight is not over as he was taken straight to a top health clinic amid fears for his deteriorated health.

In March, Reed told his parents he’d been exposed to tuberculosis and was coughing up blood several times a day, had pain in his lung, and a broken rib. He said the Russians had not given him adequate medical treatment.

Reed had also been waging a hunger strike to protest being locked in solitary confinement.

On Wednesday Reed looked emaciated and frail in images from the prisoner swap, and appeared to need support from personnel involved in the swap to stand and walk.

His family told Good Morning America on Friday that they were unaware of the specifics of his condition, but that he was in high spirits.

‘We don’t have a whole lot of answers yet, he’s getting some testing done,’ his mother said, ‘He’s at a top notch facility getting great care but we won’t know more for a few days.’

Complicating concerns about Reed’s health was the mounting tension between the U.S. and Russia over the war in Ukraine, but how the conflict affected the deal isn’t clear.

U.S. officials stressed that the negotiations for Reed´s release were narrow in scope, focused squarely on the prisoners and not on Russia´s war and not reflective of any broader diplomatic engagement.

But while the timing of the deal was startling, it´s also clear that the groundwork for it had been laid before the conflict had begun.

Just as the war was about to commence, vice president at the Richardson Center for Global Engagement Mickey Bergman and his colleague, Bill Richardson – a former U.S. ambassador to the United Nations and ex-New Mexico governor – flew to Moscow for a meeting with Russian officials to continue negotiations they’d been having for the release of Reed and another jailed American, corporate security executive Paul Whelan.

They left with the contours in place for the one-for-one swap that ultimately took place.

In Texas, Reed’s parents were worrying that Russia’s war with Ukraine – and resulting tensions with the U.S. – could close off communication channels and prevent any common ground for negotiations, so they attempted to catch the White House’s attention.

As Biden traveled to Texas to support veterans, the Reeds stood along the motorcade route in hopes of getting meaningful face-time with the president. That didn’t happen, though he did speak by phone with the couple.

Later that month, they arrived in Washington and stood with signs near the White House, hoping again to meet with the president, and were invited into the Oval Office for a sit-down with Biden and other administration officials.

The White House issued a statement that night reiterating its commitment to getting Reed and Whelan home.

Ultimately it was President Biden,’ Reed’s father said on Good Morning America, ‘We had always said, ‘if we can just speak to the man he would make this happen’ and that’s exactly what happened. He did everything that he said he would do. he was amazing. We can’t thank him enough. We believe he may have saved Trevor’s life.’

Reed was detained in Russia in 2019. He was accused of assaulting a police officer while visiting his girlfriend in the country – something he has always denied.

In return for Reed’s freedom, the U.S. agreed to return Konstantin Yaroshenko, a Russian pilot serving a 20-year federal prison sentence in Connecticut for smuggling drugs.

The film tells the story of U.S. officials’ efforts to free Francis Gary Powers, a spy plane pilot shot down over the Soviet Union in 1960, culminating in his exchange for KGB spy Rudolf Abel on the Glienecke Bridge in Germany.

Reed’s release has refocused attention on two other Americans who remain in Russian prison, Whelan and WNBA star Brittney Griner.

Whelan was convicted of espionage charges in Russia in 2020 after an arrest in 2018. He denies the charges and has been in jail for 40 months.

Griner was jailed in February after being caught with a marijuana pen at a Russian airport.

The State Department says it is a ‘top priority’ to bring her home.

The Reeds told Good Morning America that they and Trevor will be advocating for their release.

‘Our hearts go out to them. We can only imagine how disappointed their loved ones are that they didn’t get to come home,’ Reed’s mother said, ‘When we spoke with Trevor that was the very first thing he said to us. He said ‘I feel terrible that Paul is still there and I am here.’ He said when he gets better he’s going to start advocating for them right away. That’s how we feel. We’re going to start advocating for everyone to come home.’