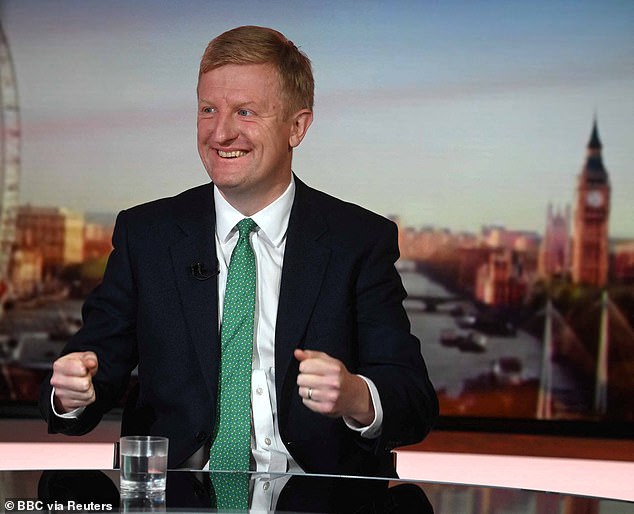 The Conservative Party chairman today insisted Boris Johnson has ‘plenty more fuel in the tank’ as he warned disgruntled Tory MPs that toppling the Prime Minister over Partygate would be ‘dearly damaging’ to Britain.

Oliver Dowden backed Mr Johnson to lead the Tories into the next general election despite growing calls from among backbench MPs for the PM to quit as party leader and leave 10 Downing Street.

The PM has faced another tumultuous week in the Partygate scandal.

He was forced to back down and allow yet another investigation into Covid rule-breaking in Number 10 in the face of a threatened Tory rebellion.

But a shambolic U-turn on the issue by Number 10  failed to quell the anger among Conservative MPs as there were more calls – including from staunch Brexiteer Steve Baker – for Mr Johnson to go.

The House of Commons’ Privileges Committee will now consider whether Mr Johnson knowingly misled the House over lockdown-busting gatherings, following his past denials.

It is the third Partygate probe, following the ongoing Metropolitan Police investigation and an inquiry by senior civil servant Sue Gray.

The PM is also braced for a second police fine over a ‘bring your own booze’ event in the Downing Street garden in May 2020, at the height of the UK’s first national lockdown.

Mr Johnson has already been handed a £50 Fixed Penalty Notice (FPN) over his 56th birthday bash in Number 10 in June 2020.

But, despite the unrelenting pressure on the PM over Parygate, Mr Dowden backed Mr Johnson to remain in post.

He said he and Mr Johnson ‘share people’s frustration over what happened’ in Downing Street under Covid rules.

But Mr Dowden insisted it needs to be ‘balanced out’ against what the Government has achieved; such as the Coronavirus vaccine rollout, Brexit and supporting Ukraine, and ‘the Prime Minister getting those big calls right’.

‘Talking to the Prime Minister, he’s got plenty more fuel in the tank,’ he told the Sophy Ridge on Sunday show.

‘He’s got real energy and determination to continue to serve this country and deal with some of the big challenges we face.’

It has been suggested a total of 46 letters calling for a confidence vote in Mr Johnson have been sent by Tory MPs to Sir Graham Brady, chairman of the backbench Conservative 1922 Committee, which is just eight short of the total needed.

In a warning to Conservative MPs agitating against Mr Johnson, Mr Dowden added: ‘I think the uncertainty that would be caused by a change of leader would be dearly damaging to this country.’

Next month’s local elections are set to prove a key test of the impact of the Partygate scandal on voters’ opinions of Mr Johnson and the Tories.

Mr Dowden admitted the local elections would be ‘challenging’, but also stressed the Conservatives were ‘mid-term’ after their 2019 general election victory – often a low-point in support for incumbent parties.

The Tory chair refused to be drawn on the ‘hypothetical scenario’ of Mr Johnson having to resign if the Privileges Committee found that he lied to the Commons over Partygate.

‘I don’t believe the Prime Minister misled Parliament,’ he added.

‘He is perfectly open to the Privileges Committee to conduct that investigation and Parliament consented to that, so I don’t believe that scenario will arise.’

He also said it was ‘quite a speculation’ to suggest Mr Johnson would receive further fines as part of the Met Police’s Operation Hillman probe into Partygate.

It was widely reported on Friday night that more FPNs had been issued by Scotland Yard in relation to the May 2020 ‘BYOB’ event, which the PM has previously admitted to have attended.

Mr Dowden told the BBC’s Sunday Morning programme: ‘I think in relation to these fines, we just have to let the police investigation happen.

‘I think it is quite a speculation to assume there will be more fines issued.’

Labour leader Sir Keir Starmer dismissed suggestions that his party were obsessing about the Partygate scandal.

‘But why are we talking about this? Answer: because the Prime Minister has broken the rules he made, and been fined by the police for doing it.’

Sir Keir called for Chancellor Rishi Sunak to come forward with an emergency budget to deal with the cost-of-living crisis.

‘I do want to concentrate on the cost of living, but if you or anybody else think that I’m not bothered by standards in public life, that it doesn’t matter that the Prime Minister has broken the laws that he made… then I am sorry, I am not going to shy away from that,’ he added.

The Labour leader also insisted there was ‘no equivalence’ between accusations that he broke rules during the pandemic while in Durham and Downing Street being ‘probably the most fined workplace in the whole of the United Kingdom’.

He said: ‘The police looked into it. That’s the end of it. I’ve got nothing to add. There is no equivalence.

‘There is no way of suggesting that 50 fines in Downing Street, the Prime Minister and the Chancellor, they have been found to have broken the law, the criminal law at that.’