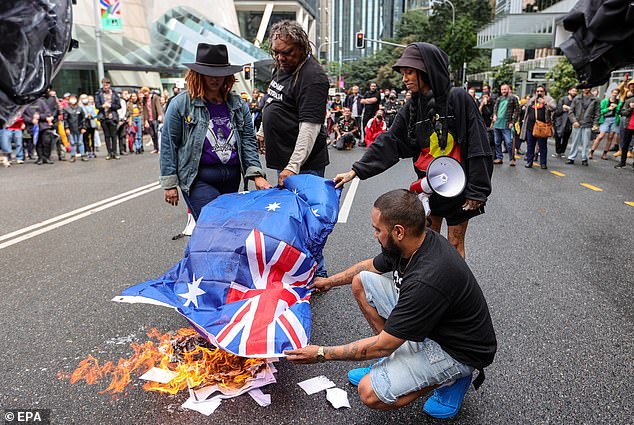 After barely a few hours after the national mourning ceremony for the Queen, protesters have set fire to the Australian flag while calling for the “abolition of the monarchy.”

At demonstrations against colonialism and to highlight the suffering of First Nations people, thousands turned out in Sydney, Brisbane, Melbourne, and Canberra.

At Melbourne’s Birrarung Marr, protesters tore the flag in pieces while yelling “abolish the monarchy.”

On the National Day of Mourning for the Queen, Senator Lidia Thorpe of the Federal Greens led a rally.

The gathering heard Ms. Thorpe say, “The Crown’s boot is on our neck, and we’re sick of it.”

The group is anticipated to march to the state legislature.

No Kings, No Cops, No Capitalists was the message on a banner held by the Socialist Alternative, an organisation that advocates for economic change, during the Brisbane demonstration.

Other demonstrators donned shirts that demanded the elimination of Australia Day.

native-born senior One such garment was worn by Uncle Wayne Wharton as he watched other indigenous protestors burn an Australian flag in Brisbane’s central business district.

The demonstrations have been planned by activist organisations ever since the Queen passed away barely a week ago.

An anti-monarchy guy was expelled from Government House in Adelaide after being overheard yelling.

The Mile End resident, age 31, was ordered to leave by police, but he refused.

He was led away from the property and given a 24-hour trespass notice prohibiting him from returning.

The protests are being organised by activist organisations including Warriors of the Aboriginal Resistance (WAR) and Fighting in Solidarity Towards Treaties.

“This is a position against the ongoing atrocities against marginalised Asian, Black, and First Nations groups. We want justice, the truth, and everyone’s responsibility; we do not support benefactors or Stolenwealth (sic). On Facebook, WAR said, “Justice for everyone.”

This protest is directed against racial colonial imperialism.