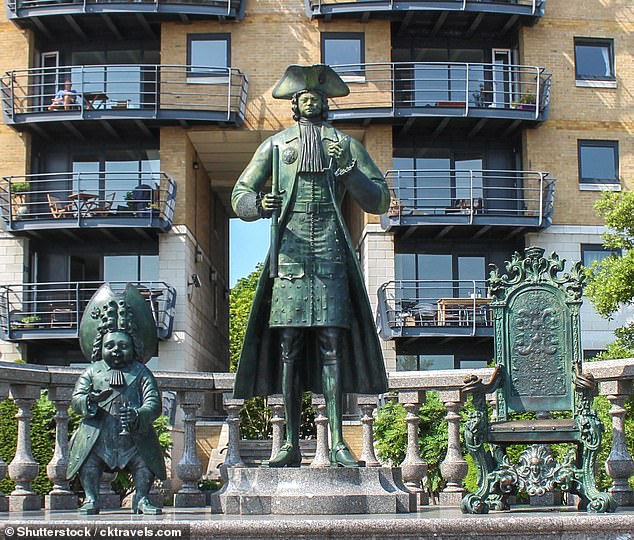 Damage to a statue of Peter the Great that Putin’s dictatorship sent to the UK more than 20 years ago has prompted a ‘pass the parcel’ game between Britain and Russia over who should pay for repairs.

The statue in London’s Deptford Creek was unveiled in 2001, and Putin and Prince Andrew paid a visit two years later during the Russian dictator’s state visit.

It commemorates the ‘nasty’ young tsar’s 1698 voyage to Deptford to learn English shipbuilding, during which he supposedly damaged the property and garden of writer John Evelyn.

Last month, the bronze statue was damaged by attempted robbers, with CCTV images of the incident showing two men allegedly taking an angle grinder to the monument’s marble balustrade.

Though marble is regularly used in kitchens, bronze is a good metal to scrap and played a key role in the development of human civilisation.

A Scotland Yard spokesperson told MailOnline a police investigation of the incident was closed because the hooded, mask-wearing suspects could not be identified. The statue remains partly boarded up and fenced off.

However, the attempted robbery has triggered a row among British developers, local officials and the Russian state over who should pay to fix ‘thousands of pounds worth’ of damage inflicted.

Greenwich Council says that the statue was the responsibility of the developer, Fairview Homes, which owns the section of the Thames path where the monument stands.

Meanwhile, Millennium Quay, the owners of the Thames-side housing estate surrounding the statue, has suggested that the Russian Embassy in London should pick up the tab.

Its property manager Joel Coleman, who worked on the estate during Putin’s visit in 2003, said: ‘We can get it restored if we can find out who owns it. In the last resort I’ll call the Russians. As it was a gift from the Russian people, we can see if the Russian Embassy will pay for it.’

He added: ‘People have been saying it is related to Ukraine but it wasn’t, it was blatant robbery. I watched hours of it on CCTV. They tried to steal the granite balustrade, and rip off the little man. I imagine the cost will run into thousands.’

Greenwich Council declined to comment further when approached by MailOnline for further information. Fairview Homes and Millennium Quay have also been contacted for comment.

A Metropolitan Police spokesman said: ‘Police were called on Tuesday, 19 April to a report of criminal damage to a statue near Glaisher Street, SE8.

‘Enquiries were carried out, including reviewing CCTV. The case has been closed; this can be reopened should further evidence become available.’

The statue was gifted to the UK more than two decades ago, before relations between London and Moscow deteriorated in the years after the Russian war in Georgia in 2008 and the annexation of Crimea in Ukraine in 2014.

It was unveiled by Prince Michael of Kent in 2001 and visited by Putin and the Duke of York in 2003.

A plaque on the statue says: ‘The monument is a gift from the Russian people and commemorates the visit of Peter the Great to this country in search of knowledge and experience.’

Peter has been hailed by Putin as a national hero for his role in modernising Russia and turning it into a major European power in the 18th century. The Russian president keeps a bronze statue of him in his cabinet room.

Through a number of successful wars, Peter expanded the Tsardom into a much larger empire and became one of the major European powers.

He faced much opposition to his policies and brutally suppressed rebellions that questioned his authority.

His reforms made a lasting impact on Russia, and many institutions of Russian government trace their origins to his reign.

Asked if the statue should come down, Mr Coleman told The Guardian: ‘I don’t see anything wrong with Peter the Great.

‘He was a good man in many respects. He modernised Russia, he built lots of things. We can’t deny history.’

Speaking of the 2003 visit, he added: ‘The worst thing about that was the Russian naval band practising the national anthems every morning. They couldn’t even get their own anthem right, let alone God Save the Queen.’