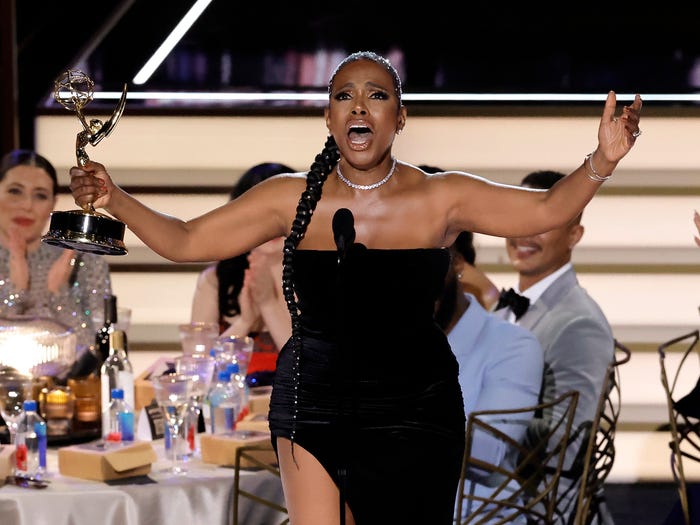 Sheryl Lee Ralph drew the audience to its feet when she sang “Endangered Species” by Dianne Reeves as she won her Emmy Award for best supporting actress in a comedy series.

Ralph received the honour on Monday night for her portrayal of veteran teacher Barbara Howard in the ABC comedy series “Abbott Elementary,” which she co-created and in which Quinta Brunson also stars.

Some audience members stood when Ralph entered the stage wearing a black, sleeveless dress and glittering rhinestones in her hair.

She then started singing.

Ralph, who was obviously moved, sang onstage, “I am an endangered species / yet I sing no victim’s song / I am a woman I am an artist / And I know where my voice belongs.”

Brunson and other audience members stood as a result of her performance.

Ralph gave press representatives an explanation of the song’s significance after she won.

Because I consider myself an artist, a woman, and particularly a woman of colour, Ralph added, “I had been singing that song for years.” I’m a woman and an artist, and I know where my voice belongs.

And there are so many young performers, artists, and even kids who believe they know what they’re going to do in life — discover your voice and put it where it belongs. I’m an endangered species, but I don’t sing any victim songs.

Ralph thanked Brunson, her husband, her kids, and “friends, including everyone who voted for me, shouted for me, loved me” during her address on stage.

Ralph said, “To everyone who has ever, ever dreamed and felt their dream wasn’t, wouldn’t, or couldn’t come true, I am here to tell you that believing and striving look like this.

After years of hard work, Ralph spoke to People earlier that evening on what it meant to finally be acknowledged with an Emmy nomination.

She said, “I am seen with my Emmy nomination, thirty years later. And thank God I didn’t give up on myself, because while the climb has been difficult, it has been worthwhile at every step.