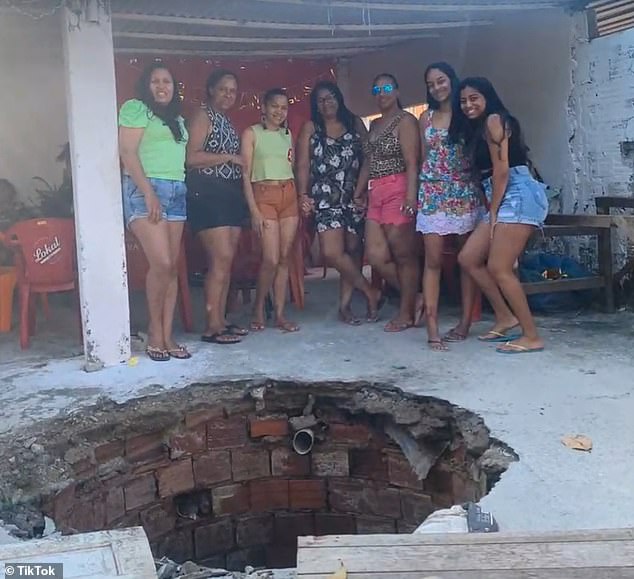 The seven dancing girls who fell into a hole in a backyard of a house in the city of Alagoinhas, northeastern Brazil, are lucky to have just suffered minor scratches.

The ladies can be seen dancing to a song at a birthday celebration on Saturday and creating a tiny circle with their arms around one another in the terrifying accident footage.

They were immediately knocked into a hole by a break in the concrete pavement.

The 38-year-old Gabriela Carvalho told the Brazilian news site G1 that as they were dancing at her grandmother’s house, they felt the earth tremble.

The moment we really started to fall, she added, “that’s when I recognized the gravity of the situation.”

For a brief while, Carvalho thought they would fall further into the hole.

“It was awful,” she said, “I feared we weren’t going to come back.” We dove extremely deep. Even as we descended, I believed it would halt somewhere else.

A another video from the party shows numerous male guests reaching out to assist the victims in climbing out of the hole.

One of the ladies who had fallen into the hole can be seen helping one of her dance companions get out while being coated in trash.

Laura Oliveira, Carvalho’s 15-year-old daughter, saw the terrifying fall as she was standing close by. Without realizing it, she posted the video to one of her social media pages.

Because a lot worse might have occurred, I really uploaded it, Oliveira claimed.

The dancers reassembled for a group shot and carried on with the celebration, unfazed by the mishap.

To make sure the location is secure enough for the celebration of another party in October, Carvalho’s grandma is already hard at work patching the damaged pavement.

»Seven Brazilian women fall into a hole after their garden collapses«