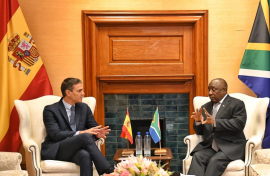 South Africa and Spain have reaffirmed their existing links of friendship and solidarity.
“We have just ended a very productive meeting in which we discussed ways to consolidate and deepen bilateral relations between our two countries.
Thursday, President Ramaphosa stated, “I am glad to report that we held in-depth discussions on expanding trade and investment between South Africa and the Kingdom of Spain.”
President Ramaphosa addressed the media during a press conference held in the Union Buildings, where he hosted his Spanish counterpart, President Pedro Sánchez Pérez-Castejón, and his delegation.
Three Memoranda of Understanding (MOUs) were signed between the two nations, notably in the areas of sport and library services.

Commerce relations
Ahead of the Spain-South Africa business summit, President Ramaphosa stated that South Africa is extremely encouraged by Spain’s interest and investment in vital industries for economic growth and development.
“Poverty, inequality, and unemployment can only be solved by collaboration, foreign direct investment, and expanding trade,” he stated.
South Africa and Spain are the two top citrus exporters worldwide.
During their meetings, Presidents Ramaphosa and Sánchez agreed that a solution is required for the new regulations imposed by the EU on citrus fruit imports from South Africa, and they pledged to examine the issue and find answers.
“Through a process of rural development, land reform, and expanding the role of youth and women in agriculture, more producers will enter the agricultural space, as evidenced by the increasing number of black citrus farmers.
The President stated, “We would like to see them flourish and acquire access to vital markets like Spain and the rest of the EU.”
The President emphasized that the Kingdom of Spain has played a significant role in the global response to the COVID-19 pandemic by, among other things, providing funding and vaccines to COVAX, donating more than 20 million vaccine doses to African nations, and providing financial support to the Global Fund.
The two heads of state also got the opportunity to discuss regional and global problems of significance.
South Africa and Spain are completely committed to preserving and developing the multilateral system based on rules as the fundamental mechanism for resolving wars and other global concerns.
“We committed to achieving a prosperous, safe, and peaceful future for those regions on our respective continents afflicted by violence and insecurity,” he said.

Climate change
With less than a month until the COP27 Climate Change Conference of the United Nations in 2022, the Heads of State explored possibilities for collaboration as part of the global response to tackle climate change.
South Africa and Spain agree that climate change, the loss of biological diversity, and other environmental concerns must be tackled in the context of sustainable development, according to President Ramaphosa.
Increased support for green, sustainable energy policies and technologies is a vital component of our collective response to climate change. Several Spanish firms are involved in the renewable energy sector in South Africa, and we would want to see these investments grow. “We welcome Spain’s enthusiasm in partnering with us to accomplish a just transition to a low-carbon, climate-resilient economy and society.” He stated that the government anticipates continuing cooperation that would benefit the people of Spain and South Africa.

Sanctions
President Ramaphosa also used the opportunity to call on countries that have imposed sanctions on Zimbabwe to lift them so that Zimbabwe’s economy can recover.
“We call on various countries that have imposed sanctions on Zimbabwe to lift those restrictions so that Zimbabwe’s economy can recover and return to its former state. Thus, people who have left Zimbabwe will have a strong incentive to return and resume normal lives there.”
He stated that sanctions imposed on Zimbabwe by a number of countries have a severe effect not just on Zimbabwe’s economy but also on a number of Southern African Development Community (SADC) countries.
As the sanctions damage the Zimbabwean economy, more Zimbabweans plan to relocate to South Africa and other nations in the region.
This places tremendous strain on us. “South Africa is extremely receptive to the influx of people from other areas of the continent, but with the economic issues of unemployment and inequality that our people are currently confronting, the pressure is intensifying,” the President stated.
President Ramaphosa expressed worry that countries that continue to implement sanctions are unconcerned with the effect this has on countries that accept migrants.
The President stated, “We believe that these sanctions should be withdrawn so that we can support the economies of these nations and reduce the incentive for their citizens to depart for other countries.”