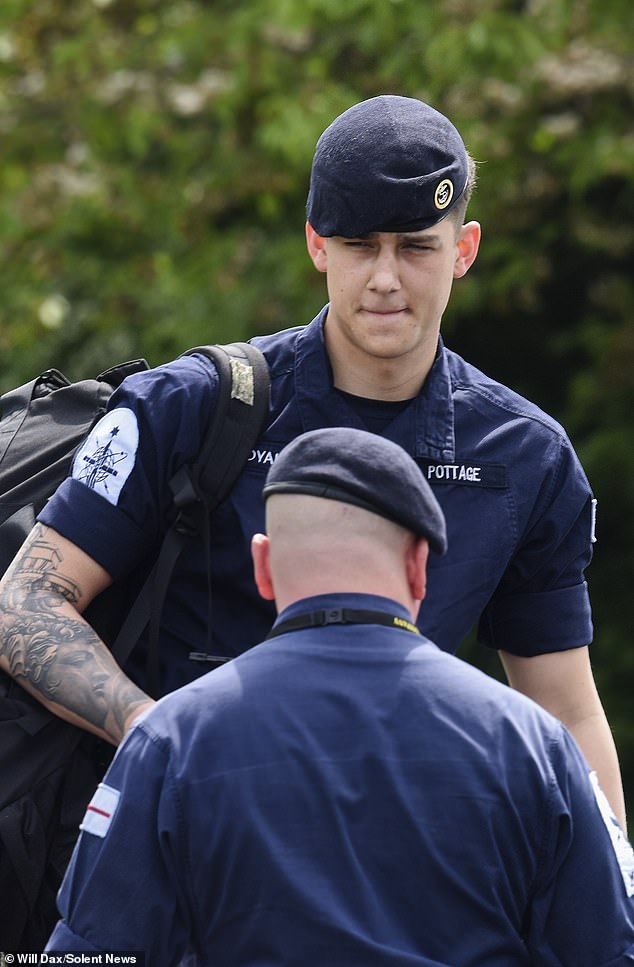 A Royal Navy weapons engineer has been locked up after he secretly filmed himself having sex with a female crew mate on a warship and showed the ‘humiliating’ clip to colleagues on Snapchat for ‘bragging rights’.

Able Seaman Louis Pottage left a party in the frigate’s mess hall to have sex with the woman and then took out his phone while standing behind her to record it without her consent.

At Bulford Military Court, Wiltshire, AS Pottage was locked up for 120 days after pleading guilty to one charge of disgraceful conduct of an indecent kind.

A judge described it as ‘a gross breach of trust between you and your colleague who was put in an extremely humiliating and difficult situation’.

William Peters, prosecuting, told the hearing: ‘A party was held in the 45-man male mess on HMS Portland and they were joined at an early stage by the females from the female mess.

‘Most were drinking and dancing and, after an hour or so, AS Pottage and one of the females left and had sex.

‘Whilst standing behind her, AS Pottage made a short film of it on his phone and in this footage the female could be seen.

‘He then went back down to the male mess and showed the short footage to others.

‘One colleague believed he was showing the video for bragging rights. The others told him to delete it, which he did.

Sentencing the sailor, Judge Advocate Alistair McGrigor said: ‘You consumed alcohol, you and a female trainee left to have sexual intercourse.

‘During sexual intercourse you filmed a short clip of you having sex with her from behind without her knowledge.

‘You returned to the mess and you decided to brag about what had taken place. No doubt your judgement was impaired by alcohol.

‘Your bragging as to what was a private act was bound to get out and did so very quickly among naval colleagues.

‘This was a gross breach of trust between you and your colleague who was put in an extremely humiliating and difficult situation.

‘Your actions fell far below the proper standards of decency required in the services.’

AS Pottage, now of shore base HMS Drake at Devonport, will remain in the Navy but will be detained for 120 days at the Military Corrective Training Centre in Colchester, Essex.