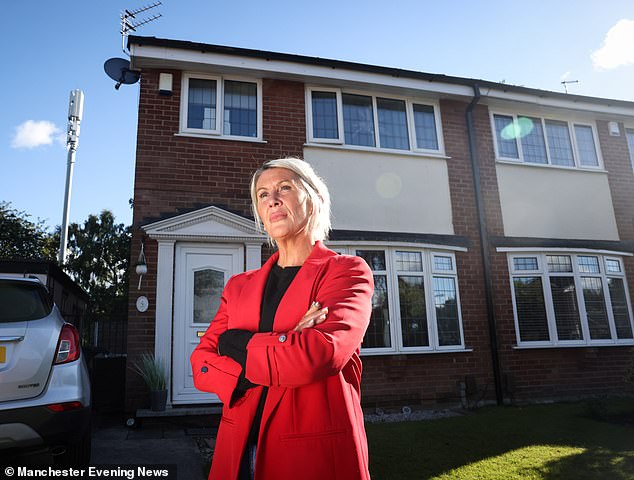 Residents who returned from work to find a high 5G pole that looked like a “rocket” in their cul-de-sac with “no notice” were incensed.

In the Rochdale community of Balderstone, neighbors expressed their “great dissatisfaction” in not receiving notice of the building of the 65-foot tower so close to their houses.

When mother Clare Brophy arrived from work one day and saw the mast towering on the opposite side of her garden fence, she said she “almost had a heart attack.”

It is unpleasant to look at, another resident named Amy Openshaw told the Manchester Evening News. It is in your face when you are in the rooms at the top of the stairs.

We actually left for work and returned home to see it.

I’ll probably talk more about it when the leaves start to fall since I’ll be able to observe it more.

Instead of being directly there, there is a lot of vacant area where it might have gone.

Because it would “represent an incongruous and overpowering presence” close to residences, Rochdale Council rejected the installation’s request for planning clearance in March of last year.

Residents are upset because the decision was reversed and the “monstrosity” is now within touching reach of their back yards when they get home from work.

If I walked over and attempted to pull it down myself, Ms. Openshaw joked, she would be unable to stop it.

An unnamed individual told the newspaper that they were “not a NIMBY” but wished there had been greater information over the pole.

“This monster had been created at the rear of my property,” they said when they returned from work.

We were not given the opportunity to challenge this decision, and we are quite dissatisfied and outraged about it.

Residents of Melbourne Close, Balderstone, disagree with mobile infrastructure company Cornerstone’s claim that it “gives significant attention to minimize the visual effect” of its equipment.

The statement said, “There are alternative areas in the same region where this might have gone, creating less impediment to neighboring houses.”

Unfortunately, I know they had to go someplace, and wherever they go, they are an eyesore.

On the same street as Claire, Ange and Lee Shepherd claim they are less upset by the mast but do wish they had been given a heads-up.

Since they were doing all the work and it was difficult for me to get my vehicle in and out, that was really the only thing that really irritated us, Ms. Shepherd said.

But the rear bedroom is the only spot where we can really view it.

Although it doesn’t bother me much, I can see why it could. But isn’t it the price you pay for progress?

She continued by noting that while they had not been informed of the mast’s construction, they had been annoyed by the previous construction noise, which she described as making a “right racket.”

Then, she said, “the next thing I knew, there it was.”

“For us, it’s not ugly.” There actually isn’t a problem. There are several trees blocking the route.

Tony Lloyd, the MP for Rochdale, said he would ask government officials in charge of the Planning Inspectorate to ‘urgently’ look into the situation.

Nobody should return home to such a monster, he argued, with what seems to have been extremely insufficient consultation and little regard for the view from her residence.

Cornerstone said that it is aware of how the aesthetic effect of its mobile infrastructure affects local communities and that it takes this into careful consideration.

The business said in a statement, “We want to ensure they fit into the landscape as much as is feasible while delivering reliable digital access to the communities we serve.”

For the purpose of bringing vital network connection, including 5G services, to the neighborhood, Cornerstone proposed a base station in Balderstone, Rochdale.

‘Unfortunately, the Local Planning Authority [the council] rejected the planned base station.

“After this rejection, we carefully considered all of our possibilities but came to the conclusion that the suggested location remained the best choice locally.

A planning appeal advanced and was finally successful.

According to the statement, “The site has already been built, and screening provided by nearby trees will reduce views of the plan over most of the immediate region.”