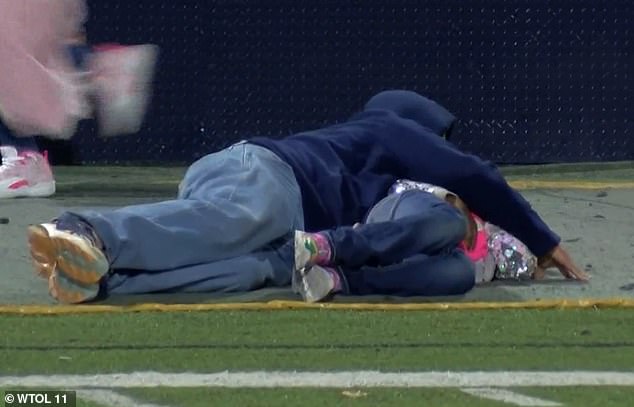 Student and two adults were wounded in a shooting near an Ohio high school.

At least 12 shots were fired by suspects outside of an Ohio high school football game, injuring a kid and two adults.

Students and fans were enjoying the Toledo Central Catholic vs. Whitmer High School football game at approximately 9:30 p.m. when shots were fired near the end of the fourth quarter.

Fans jumped over the stands’ rails to seek shelter, while others rushed through the metal seats, as captured on video. While the band dashed across the field, several were spotted hiding on the ground and shielding youngsters.

The incident took place outside of the stadium, close to the field house.

Sergeant Bortel informed DailyMail.com on Saturday afternoon that no one has been brought into custody.

The names of the Whitmer student and the two adults, two females and one male, who were sent to the hospital have not been revealed.

There were no significant injuries.

This was the scene outside the stadium during the Central Catholic-Whitmer game when shots were fired. We have confirmed that three individuals have been shot. Unknown are the current conditions. A truly terrifying scene. pic.twitter.com/gjBpcacz9a

A Whitmer student and two adults were shot outside the Whitmer High School vs. Toledo Central Catholic football game on Friday at 8:20 p.m.

Parents were observed covering their children on the ground. The incident occurred outside the stadium.

After hearing at least 12 gunshots, the audience was observed racing through the stands to escape.

As guns broke out on the field, the band fled across it. No one has been apprehended, and it is unknown why the accused opened fire.

DailyMial.com has reached out for comment to the Toledo Police Department.

Everyone was inspected before to entering Whitmer Memorial Stadium, according to the Washington Local Schools District. No one in the audience was wounded.

Kapszukiewicz stated that 16 off-duty law enforcement officers worked the game and were able to keep everyone safe.

“There is still much we do not know about last night’s events, but we do know this: what occurred in our city was inexcusable. Everyone should be able to safely enjoy a Friday night football game,’ he said in a statement.

The game, which Central Catholic won 45-15, was canceled and will not be rescheduled. According to Central Catholic principal Kevin Parkins, the junior varsity and freshman games on Saturday have also been canceled.

Parkins also declared that the student body would assemble on Tuesday morning following the holiday weekend to ‘speak to them, offer support, and pray’

Friday, he also urged others to “respect life.”

‘If we are irresponsible with lives – there is nothing more precious – we must continue to fight each and every day to ensure that the world, our nation, our state, and our community in Northwest Ohio recognize the value of life.

The inquiry by the police is underway.

The mayor stated that 16 off-duty police officers were present at the stadium to ensure everyone’s safety.