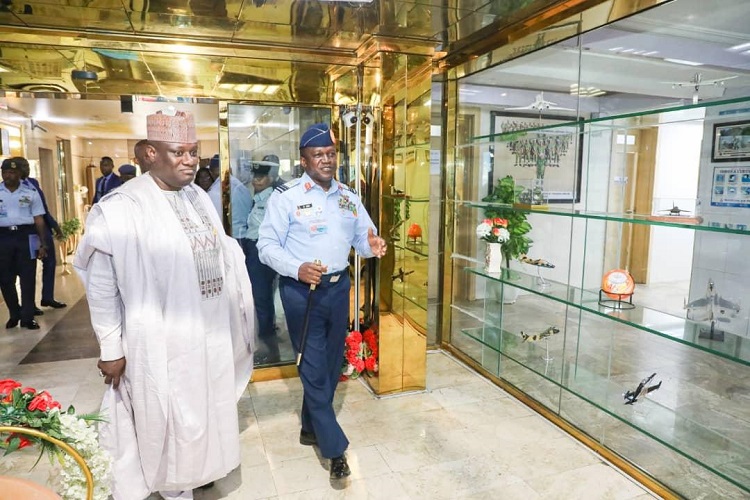 The new Permanent Secretary (PermSec), Federal Ministry of Defence (FMoD), Dr Ibrahim Kana, mni, has stated that one of his aspirations for the Ministry is to see to the deployment of more military personnel to take up key positions in the Ministry, alongside their civilian counterparts.

He stated this when he paid his maiden visit to Headquarters Nigerian Air Force (NAF) in Abuja.

According to Dr. Kana, the right mix of civilians and military personnel working side-by-side at FMoD will reduce the bottlenecks usually experienced in handling and treating official matters affecting the Services while also enhancing cooperation and collaboration.

He also stated that under his watch, special attention will be given to improving the standards of education and healthcare in schools and medical facilities run by the military, in view of the critical roles these infrastructures play in enhancing morale among troops.

Dr. Kana also emphasized the need for improved jointness and synergy especially now that the various Services continue to expand in sizes and roles as well as delve into each other’s responsibilities and expertise.

“As the Services expand and delve into each other’s expertise, the need for synergy and cooperation is expedient,” he noted.

Dr. Kana also commended the NAF for its counterterrorism and counterinsurgency efforts, while acknowledging the risks NAF personnel, especially pilots, take towards securing the Nation.

While welcoming the new PermSec, the Chief of Air Staff (CAS), Air Marshal Oladayo Amao congratulated him on his appointment and assured him of NAF’s readiness to support him towards a successful tour of duty.

He noted that going by the impeccable milestone achieved by the PermSec as noted in his citation, he was confident that the needed synergy between the Services and FMoD would be much better.

The CAS further stated that for the NAF and sister Services, the culture of jointness in all joint operations has come to stay and because the solution to the current security challenges requires a whole-of-society approach, the Armed Forces will require the support of the PermSec.

Dr. Ibrahim Kana was accompanied to headquarters NAF by the Director of Air Force, Mr. Ashibel Utsu and other key Directors of the Ministry while the Chief of Policy and Plans, Air Vice Marshal Charles Ohwo led other Branch Heads and Directors to support the CAS in welcoming the PermSec.