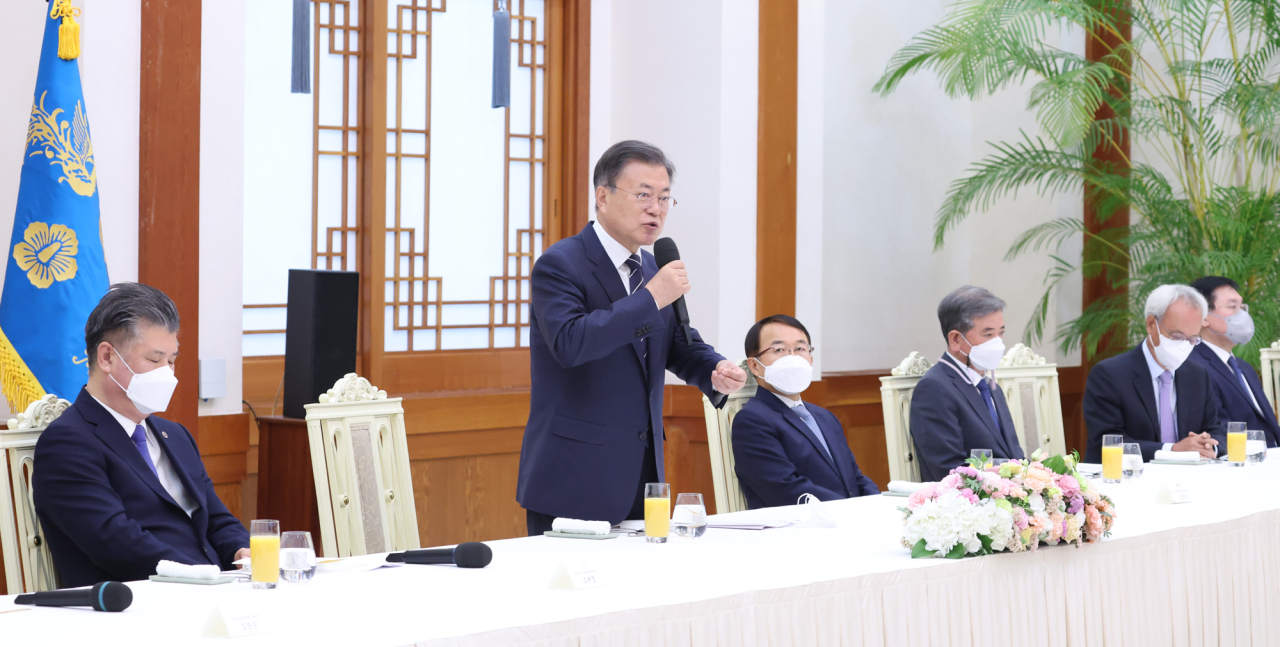 President Moon Jae-in will serve his last day as president Monday, leaving behind a mixed batch of results.

Moon and members of his Cabinet will spend their final day in office paying respects at the Seoul National Cemetery and the burial site of independence activists at Hyochang Park.

He will also give his final address as the president in the morning and leave the presidential office at 6 p.m. with first lady Kim Jung-sook by walking out of the front gate to spend a night at a nearby hotel upon completing his official term as the 19th president of South Korea.

Moon is then scheduled to attend his successor President-elect Yoon Suk-yeol’s inauguration ceremony at the National Assembly, then take a train to his private residence in Yangsan, South Gyeongsang Province.

A series of books detailing the accomplishments made during the five-year term was released for distribution Friday. The series consists of 22 books with a total of 11,944 pages, the largest volume of any book series released by an outgoing president in South Korea.

Moon leaves behind a host of achievements and missteps, but for the time being he will be remembered as the president who pushed for prosecution reform, struggled with real estate policies and the COVID-19 pandemic. He will also be remembered for leaving the peace process with North Korea largely unfinished.

Moon took office on May 10, 2017 by winning 41.08 percent of the vote in the 19th presidential election held following the impeachment of his predecessor Park Geun-hye on March 10 the same year.

Throughout his term, Moon saw some of the highest approval ratings for any Korean president, ranging from 84 percent early in his term to around 40 percent in recent weeks.

But the high ratings hide criticism he has faced over a number of policies, the most prominent of which were Moon administration’s real estate measures.

Real estate trouble is viewed as one of the main causes of the Democratic Party’s defeat in this year’s presidential election.

Housing prices skyrocketed despite more than 20 real estate policy initiatives from the Moon administration, pushing public sentiment against Moon and the Democratic Party.

A scandal surrounding the Land and Housing Corp. uncovered in March 2021 added fuel to the criticism, initiating a series of defeat in elections for the liberal party, starting with Seoul and Busan mayoral by-elections the same year.

Moon has also been at odds with many in reforming powerful government agencies, but the highlight was his attempt to reform the prosecution, which has faced criticism for years of abusing its power and authority for political purposes.

Upon starting his term, Moon named Cho Kuk, a professor of law at Seoul National University, as his first secretary for civil affairs, an unusual move considering the seat was usually filled with those with a prosecutorial background.

Moon introduced measures that reduced investigative powers of the prosecution, and put the move into an official law in January 2020. Moon and the Democratic Party also gave birth to the Corruption Investigation Office for High-ranking Officials.

The Democratic Party passed two additional bills this month at the National Assembly on further stripping investigative powers from the prosecution, as the final step in Moon’s initiative to divide the power given to the prosecution to other agencies.

Yet the reform drive was met with fierce opposition in the process, essentially giving birth to President-elect Yoon Suk-yeol’s political career. He rose to fame after launching investigations into allegations surrounding Cho when he was appointed to serve as the justice minister under Moon.

Cho’s successor Choo Mi-ae also ran into conflict with Yoon, and public reception on the initiative turned negative while seeing the administration in turmoil.

The latter half of Moon’s term was highlighted by responding to the COVID-19 pandemic. South Korea responded to the virus with rigorous social distancing rules and trace, track and treatment system, faring better than most other countries in early months of the outbreak.

Moon administration’s COVID-19 response eventually came under fire, as the number of daily cases skyrocketed, drawing some to question whether Korea was really successful in its response when numerous business owners and corporations underwent troubles from strict anti-virus rules.

The president also sought to ease the tension on the Korean Peninsula by promoting peace with North Korea. Despite some milestones early on, little remains to show for Moon’s efforts with Pyongyang having restarted ballistic missile tests, with nuclear tests anticipated by experts.

Moon held three summits with North Korean leader Kim Jong-un in 2018 to show progress toward peace on the peninsula, also aiding a successful summit between Kim and then-US President Donald Trump the same year. But peace talks stalled soon after, as no visible progress was made toward denuclearization of North Korea.

The relationship between Seoul and Pyongyang reached plateau in 2020 when North Korea bombed an inter-Korean joint liaison office in its territory and cut all communication lines with South Korea. The hotlines were restored later, but the relationship has remained largely hostile until now.

But Moon has remained hopeful toward promoting peace in the peninsula, working towards formally declaring an end to the Korean War which ended in an armistice in 1953. North Korea ran 15 missile tests so far this year, seemingly ignoring Moon’s calls for peacemaking efforts.

Yoon, successor to Moon, will officially start his term by joining a bell ringing ceremony at the Bosingak Pavilion in central Seoul at midnight before his official inauguration Tuesday. He will start working as the president at a new office prepared in Yongsan-gu, central Seoul.