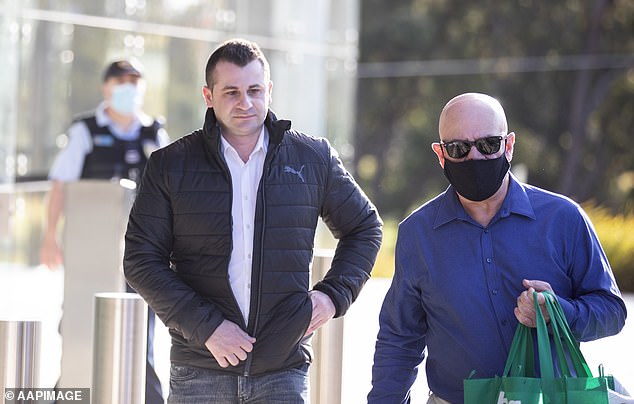 The husband of Melissa Caddick has denied any involvement in his wife’s disappearance and that he purposefully put off reporting her missing in order to purchase time or divert police attention.

Anthony Koletti testified during the inquest regarding the fraudster’s disappearance and possible death that he most certainly did not help her go missing.

Did you wait to report her missing so she had more time to attempt to get away or commit suicide? Jason Downing SC’s legal representative remarked.

The hairdresser and sometimes DJ was earlier questioned once again on the day he claims Ms. Caddick vanished from their Sydney eastern suburbs home on November 12, 2020.

He told the NSW Coroners Court that he traveled to a friend’s house in Rose Bay that evening to acquire a “e-cigarette.”

Was it really to smoke the joint? Dr. Downing enquired.

I’m not sure whether it’s conceivable, Mr. Koletti said.

You must keep in mind, Mr. Downing said.

Mr. Downing said, “On a night you told us you were doing searches all day, you really went to smoke a joint with a buddy.”

Mr. Koletti acknowledged using marijuana to relax and expressed worry about his wife.

Before handing his phone over to authorities to help with their investigations, Mr. Koletti erased texts he had sent and received to that buddy, according to Mr. Downing.

According to Mr. Koletti, using marijuana must have been a factor in doing that.

On November 13, he officially reported his wife missing, and he was questioned about his whereabouts the previous evening.

Not that I am aware of, he said.

Mr. Koletti said on Thursday that the day she vanished is “all a bit of a fog” and that his memories are “very fuzzy.”

But when she didn’t, he claims he believed she was seeing a lawyer or checking into a hotel in preparation for her court date the next day.

Mr. Downing questioned why, if he subsequently thought she was with a lawyer, he insisted she go in sporting attire.

Mr. Koletti denied seeing her wear them and said that it was based on assumptions.

Dr. Kerri Eagle, a forensic psychiatrist, identified Ms. Caddick as having a “narcissistic personality disorder,” although she acknowledged that this diagnosis was made without speaking to her and solely on the basis of statements and other documentation.

Dr. Eagle said at the inquest that Ms. Caddick depicted herself as a very accomplished and wealthy person and fueled her self-esteem via the adoration of others.

If she felt she couldn’t recover from being exposed as a phony and not being as smart as she thought, Dr. Eagle warned that she could feel that she had no other option than to commit herself.

However, based on her evaluations, the doctor did not think she had sociopathic or psychopathic characteristics.

Adam Grimley, Ms. Caddick’s brother, said in an affidavit that his family was “floored” by the way the assistant attorney seemed to be “coming after” his brother-in-law.

He observed that counsel seemed to be presenting “unverified rumour as truth” and said that Mr. Koletti had had great suffering as a result of losing his wife, being shocked by her behavior, and the unfounded claims that followed.

According to his attorney Judy Swan, he had received threatening texts throughout the previous night, one of which said, “Dodgy prick, I hope you get locked up.”

On Friday, the inquest will resume.