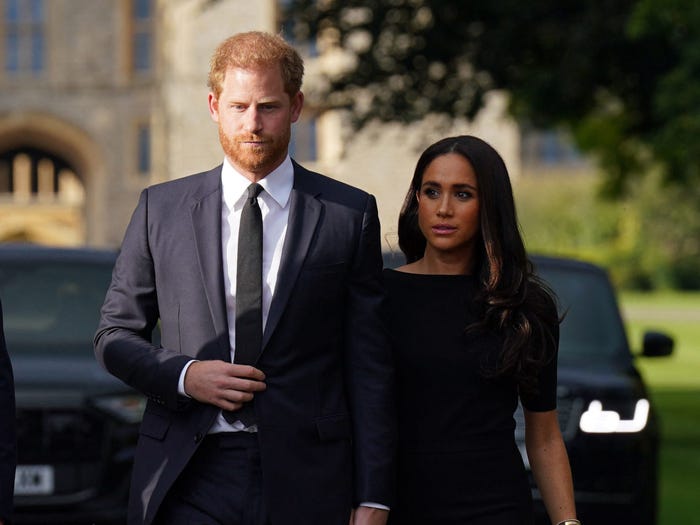 As they awaited the arrival of the Queen’s casket at Buckingham Palace on Tuesday, the Duke and Duchess of Sussex were seen with King Charles.

Since Queen Elizabeth passed away at Balmoral Castle on Thursday at the age of 96, it was Meghan Markle and Prince Harry’s first public appearance with the monarch.

Earlier this week, the body of the queen was transported from Balmoral to Edinburgh.

Thousands of mourners showed out at St. Giles’ Cathedral to pay their respects before Her Majesty’s casket was flown back to London on Tuesday night by an RAF aircraft.

Hundreds of people cheered as the Queen’s coffin passed past the palace gates, as shown in a video shared on Twitter by Chris Ship, the royal editor for ITV.

Photographer Jeremy Selwyn recorded Charles, Harry, and Markle as they awaited the arrival of Her Majesty’s coffin, despite the fact that no pictures were allowed within the palace.

The presence of further royal family members is yet unknown; requests for information from Insider were not immediately answered by Clarence House or Buckingham Palace.

Overnight, the casket was interred in the Bow Room of the palace. In a procession, it will arrive at Westminster Hall on Wednesday in time for the people to come and pay their respects before the Queen’s burial on September 19.

The duke and King Charles seem to have put their differences aside after the Queen’s passing, despite the fact that Harry had discussed their strained relationship in an interview with Oprah Winfrey last year.

Charles highlighted his “love for Harry and Meghan as they continue to build their life abroad” in his first address as king on Friday.

According to Roya Nikkhah, royal editor for The Sunday Times, Charles used an ink pot that was a joint present from Harry and William when he was formally sworn in as king on Saturday by the Accession Council.

In the first remark he has made since the passing of Queen Elizabeth on Monday, Harry also paid respect to his father.

“I treasure the times we have spent together as well as all the other wonderful experiences we have had. You are already deeply missed by everyone in the world, not just by us, “In part of a message posted on his Archewell website, he spoke about his late grandmother.

We now honour my father in his new capacity as King Charles III when it comes to first encounters.