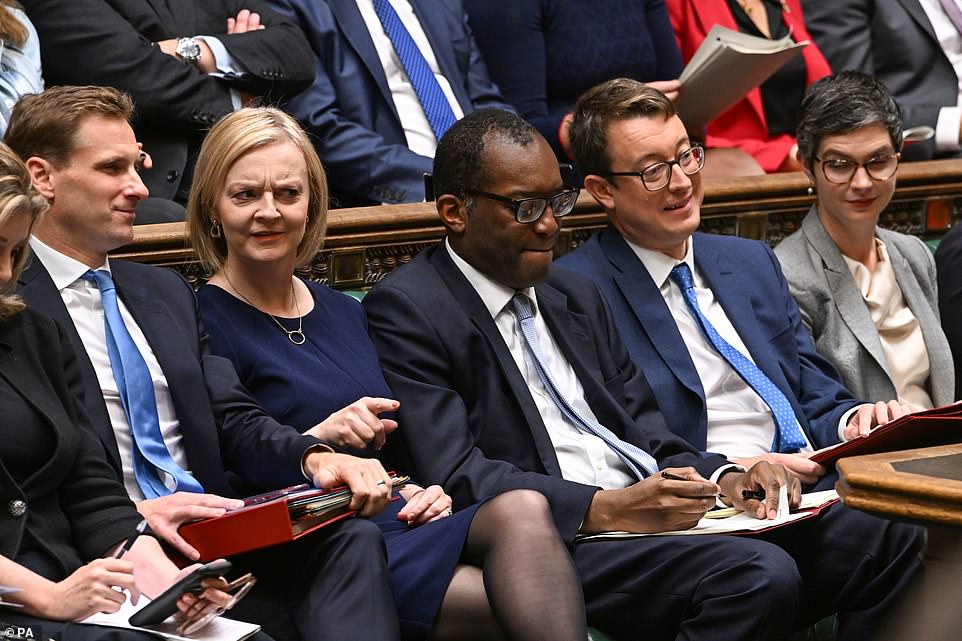 Despite growing Conservative warnings that the financial fallout from her “mini-Budget” could hand Keir Starmer’s Labour the next election after the tax-cutting package caused the Pound to plummet, fueled concerns of skyrocketing mortgage bills, and raised the cost of government borrowing, under fire Liz Truss vowed to move forward with her “controversial and difficult” economic plans.

The Prime Minister was repeatedly challenged to justify last week’s “Emergency Budget,” which panicked financial markets and triggered a Sterling crisis that resulted in an unprecedented Bank of England intervention in the economy. This came up in a brutal round of local BBC radio interviews.

She admitted that many of the choices were “difficult,” but said that she had the “correct strategy” for the economy, hinting that repealing the tax cuts would bring on a downturn.

In an effort to calm the anxious markets and in response to charges made last night that the Government requested the OBR not to calculate the figures for its “mini-Budget,” opponents will conduct emergency meetings with Britain’s spending watchdog, the Office for Budget Responsibility, today.

But after last night’s shocking poll, which gave the Labour Party a huge 33-point lead over the Tories, Conservative MPs demanded that Miss Truss and Mr. Kwarteng urgently bring forward the Government’s planned financial statement outlining how they intend to get the public finances back on track from November 23 to late October, or even earlier.

The largest margin between the parties since the 1990s was revealed by the YouGov poll, which showed the opposition on 54% and the conservatives on only 21. After last week’s tax-cutting mini-Budget caused market upheaval and opened the door for more interest rate increases, support for the Conservatives has decreased by seven points in only four days.

According to the survey, an increasing number of people who backed Boris Johnson in the most recent general election are now supporting Keir Starmer.

A wipeout if the nation went to the polls right now is implied by the fact that just 37% of those who voted Conservative in 2019 plan to support the party. In only one week, the percentage of those who say they would switch sides increased from 8% to 17%.

A senior Tory official conceded last night that his party’s polling numbers were terrible and that a Labour landslide was now certain. According to Sir Charles Walker, if there were a general election tomorrow, we would be completely destroyed. We wouldn’t continue to operate as a political party. He said that the Budget presented last week was “extremely badly done,” the numbers seemed to have been “written on the back of a fag packet,” and ministers failed to “roll the pitch” or get the market ready for its bold ideas.

A few days before to Miss Truss’ first conference as party leader, a number of prominent Tories, including former chief whip Julian Smith and former ministers George Freeman and Lord Vaizey, urged the prime minister to rethink her decision to eliminate the 45p tax.

Additionally, many Conservative backbenchers are already threatening to revolt against the Prime Minister’s Finance Bill in light of allegations from last night that the mini-Budget may be financed by drastic cutbacks to government expenditure not seen since the days of George Osborne’s austerity regime. Others have said that letters of no confidence are “coming in like there’s no tomorrow” and that Miss Truss will be “gone by Christmas”; one of them advised not to get too worked up over the 12-month requirement.

Yesterday, the Chancellor also spoke out after being silent for days, pleading for unity with uneasy Tory MPs when on a visit to an engine company in Darlington.

The Labour Party would be the only winners if we split, Mr. Kwarteng said in a statement to lawmakers, adding that the government will “prove markets our strategy is solid.”

However, a number of Conservative MPs came out in the open last night to call for amendments to the budget, including abandoning the proposal to eliminate the 45p top tax rate.

The government should drop the 45p adjustment, “accept responsibility” for the devaluation of the pound, and “make plain that it will do all necessary to stabilise markets and defend public services,” according to former chief whip Julian Smith, who urged for an urgent reassessment. Former minister George Freeman urged ministers to provide a Plan B, stating that “a lot is on the line” in the current situation.

Ministers contend that all nations are experiencing volatility as a consequence of skyrocketing energy costs brought on by the conflict in Ukraine and deny that last week’s mini-Budget was the catalyst for the market reaction against the UK.

According to a source, yesterday saw Germany’s inflation climb beyond 10% for the first time since the Second World War.

And Miss Truss adopted a belligerent demeanor, vigorously disputing assertions that the Budget, notably the proposal to eliminate the 45p top tax rate, was “unfair”.

She responded to a question about whether she was acting like “Robin Hood in reverse” on BBC Radio Nottingham by saying that the greatest way to support working families was to increase the anemic growth rate.

The PM said that rolling back the £45 billion in tax cuts may bring on a downturn. She remarked, “Having a recession isn’t fair.” It’s unfair to live in a community where there isn’t investment. Given that our tax load is the largest it has been in 70 years, it is unfair if we don’t get higher-paying employment.

Miss Truss made hints that she was upset with how her economic strategy had been presented.

She said that the energy price guarantee and the reduction in the increase in national insurance, both of which would benefit millions of regular homes, accounted for 90% of the cost.

The proposal to freeze monthly energy costs is set to go into effect tomorrow and will cost £10 billion. But since it was revealed on the day of the Queen’s passing, politicians worry that they won’t receive any credit for it. The prime minister agreed that the government must convince the markets that the UK’s debt would finally be brought under control.

She said that it was crucial that we manage our money responsibly and gradually reduce our debt. In November, the chancellor will outline his plan for gradually reducing the debt; “we will get borrowing back on track.”

The Commons Treasury committee asked the chancellor last night to push back the implementation of his debt management plan from the current target date of November 23 to next week.

Some Conservative MPs are privately expressing concern that they would vote against the proposal to eliminate the highest rate of taxation due to public outcry.

When questioned about sticking to her strategy, Miss Truss said, “This is the proper approach.” We wanted to make sure that folks wouldn’t enter the winter worrying about having to pay a lot for gasoline. It we could have let that to occur was just inexcusable.

Later, the prime minister indicated that ministers will be required to find billions of pounds in expenditure reductions to assist convince the financial markets that her proposals are feasible.

In a letter to Cabinet ministers, Mr. Philp is anticipated to urge them to find “efficiencies.”

There are “plenty of places,” according to Miss Truss, where government might operate more effectively.

The PM, according to shadow chancellor Rachel Reeves, “is making this awful situation even worse.” Families all around the nation would be very concerned as a result of her refusal to respond to inquiries about what will happen to people’s pensions and mortgages, she said.

According to experts, the most recent survey definitely showed Sir Keir to be the next prime minister. According to Patrick English of YouGov, the realignment that is now taking place is “similar” to the one that resulted in Tony Blair’s resounding triumph in 1997.

There is no use in trying to be anything other, according to James Johnson, who managed polling for former premier Theresa May in Downing Street. This is the end.

However, numerous Tories pushed the PM to stand by her position. North Dudley’s Marco Longhi, an MP who supported Miss Truss in her bid for the party’s leadership, declared: “I totally support and back the Prime Minister and her objectives for development for the nation.” We must be courageous, persist, and take all necessary steps to boost the economy.

I’m not worried, said a different Tory MP who backed Miss Truss in the leadership contest. I’m going to assume the best of her.

It’s still very early, so I believe that people will see her favorably. Markets are frightened, and once they settle down, buyers may go on.

Because we just distributed tens of billions to keep people warm and want political credit for it, the optics and politics aren’t terrific.

The Budget has temporarily backfired politically, and it is evident from the polls that we are paying a steep price for it.

It happened after the Bank on Wednesday began an emergency program to purchase government bonds in order to stop borrowing rates from rising out of hand and avert a “material risk to UK financial stability.”

After concerns about the government’s tax-cutting plans drove the pound plummeting and caused a sell-off in the gilts market, which put several UK pension funds on the verge of insolvency, it purchased up to £65 billion worth of government bonds at a “urgent pace.”

The pound made some progress on Thursday, moving over 1.1 dollars for the first time since last Friday.

His remarks were in contrast to those of Ms. Truss, who in interviews blamed “Vladimir Putin’s conflict in Ukraine” for raising oil costs worldwide.

“It is terrible that the family budgets of people throughout the nation are being threatened just so the Government can provide enormous unfunded tax breaks to the largest firms and individuals earning hundreds of thousands of pounds each year,” she added.

This catastrophic predicament was created in Downing Street and is a direct outcome of the irresponsible acts of the Conservative government.

Trade unions demanded a “cast-iron assurance” earlier after Treasury Chief Secretary Chris Philp said Whitehall departments had been told to conduct a “efficiency and prioritization exercise” in an attempt to discover savings.

Speaking to media outlets, Mr. Kwarteng said that the Government will retain the state pension’s “triple lock” despite the strains on the public budget, but he would not promise to increasing payments in accordance with inflation.

We are completely focused on making sure that the most vulnerable members of our society are safeguarded through what may be a struggle, he said, adding that it would be premature for me to make a judgment on that.

When asked by BBC London why she chose to eliminate the bankers’ bonus cap during last week’s mini-Budget rather than assist those receiving Universal Credit, Ms. Truss responded that she “wouldn’t apologise” for wanting a flourishing financial services industry that draws foreign investment to the UK.