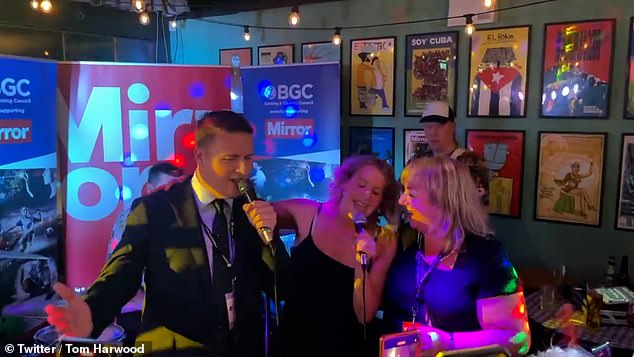 Intoxicated karaoke was enjoyed by Labour MPs last night as their party conference came to an end. Senior members in the party predicted they would “win big” in the next general election.

Thrilled by polling data suggesting they had surged even farther ahead of the Tories, members of the Labour front bench, including leader Sir Keir Starmer, celebrated in Liverpool.

Even the words of Robbie Williams’ song “Angels” were changed to read, “I’m adoring Starmer instead.”

With fewer than two and a half years before the next general election, Sir Keir told the gathering MPs, activists, and journalists at the party, sponsored by the Daily Mirror, that Labour was “confident.”

The currency upheaval has been used by Sir Keir and his party’s front bench to argue that they, not the Conservatives, are now the party of “sound money.”

One shadow cabinet member told MailOnline that they now expect to “win big” in the next election and boasted that the Conservatives are “f***ed” in the Red Wall because one poll shows Labour leading the Tories by 17 points.

In a duet performance at the party last night, Jonathan Ashworth, the shadow work and pensions secretary, and Angela Rayner, the deputy leader of the Labour Party, sang Journey’s “Don’t Stop Believin.”

The party’s shadow Levelling Up secretary, Lisa Nandy, joined others in singing “Livin’ On A Prayer” by Bon Jovi. Wes Streeting, the opposition health secretary, took on “Angels.”

To the audience, he changed the lyrics to say, “Keir won’t leave me” and “I’m loving Starmer instead.”

When Mr. Streeting said during his keynote address that cancer patients had been waiting for an ambulance for “15 years,” it was evident that last night’s partying had an effect today.

He had previously brought up the instance of David Wakeley, an 87-year-old cancer patient who had been forced to seek refuge beneath an improvised tent, where he had fallen and broken his pelvis and ribs.

He had to wait for an ambulance for 15 hours. Before making a mistake, Mr. Streeting addressed the audience of Labour members by saying, “This is the status of the NHS in Tory Britain, and it is an utter shame.