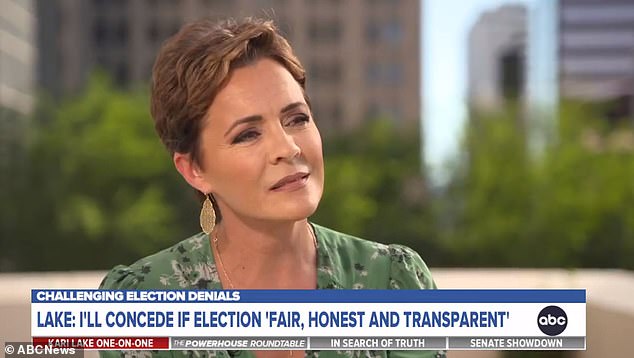 Kari Lake stated that, if elected governor in the midterm elections, she will work to modify Arizona’s early voting laws, arguing that elections should be held on a single day.

Lake stated, “I don’t know precisely how we’ll do it, but we will safeguard our election, restore confidence in our elections, and ensure that they are honest and transparent.”

The contender favored by Donald Trump has often asserted that the 2020 presidential election was stolen. She claimed that her freedom to challenge election results is guaranteed under the First Amendment.

Lake stated that, if elected in November, she will try to limit future elections to a single day.

The candidate stated, “When I first began voting in the 1980s, there was Election Day.” The Constitution specifies Election Day. It does not specify election season or month.

She said, “And the longer you drag this out, the more fraud-related issues there will be.”

Currently, according to the United States Elections Project, 263,969 early mail-in ballots have been received in Arizona.

Lake has pointed out the contradiction she observes when Democrats challenge the results of prior elections but are not dubbed “election deniers” as she has been.

The candidate produced a dossier containing 150 instances of Democrats expressing skepticism on the outcomes of past elections last week.

Lake, a former television news anchor, claimed she was instructing journalists on how to do their jobs properly by highlighting the obvious absurdity of media sites that consistently referred to the Republican nominee as a ‘election denier.’

“Why is it acceptable for Democrats to doubt elections, but not for Republicans?” When chatting with reporters in front of a group of black fans, Lake was questioned.

She said, “This is all nonsense, and you all know it.” We have the right to free expression, and we will not cede it to a group of fake news propagandists.