Skip to content
Go Home «» News «» Breaking News «» Joint press release following the meeting between the President of the Government of Spain, Pedro Sánchez, and the Prime Minister of New Zealand, Jacinda Ardern 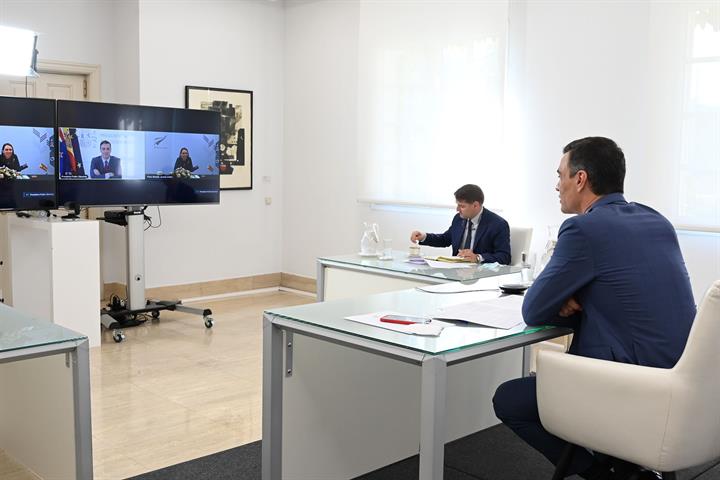 On June 28, 2022, a meeting took place in Madrid between the President of the Government of the Kingdom of Spain, Pedro Sánchez Pérez-Castejón, and the Prime Minister of New Zealand, Jacinda Ardern, who was visiting Spain to participate in the Summit of the North Atlantic Treaty Organization as one of NATO’s four Asia Pacific partners.

In the bilateral meeting, the leaders celebrated the decision to elevate relations between Spain and New Zealand to a Strategic Partnership, adopted in the Joint Declaration resulting from the Virtual Summit that took place in June 2021.

They officially launched the Global Values Partnership, a reflection of the shared vision between Spain and New Zealand for the world that the countries want to shape together.

The Global Values Partnership is based on the global outlook and common values that both countries share and their desire to support a rules-based international order through greater and better cooperation, including multilaterally.

Both countries support and celebrate diversity and are determined to advance in their respective foreign policies values such as inclusive and more equal societies, a greener and more sustainable economy, and a vibrant and resilient democracy in which pluralism flourishes and is reinforced thanks to the technological revolution.

The Partnership will seek to strengthen democracy, sustainability, gender equality and the empowerment of women, the Rule of Law, Human Rights, with special emphasis on the full exercise of the same by members of indigenous peoples and vulnerable groups.

In launching the Global Values Partnership, Spain and New Zealand commit to more closely coordinate their efforts to address global challenges based on values-based foreign policy, and advance an agenda of strengthened rules-based multilateralism in which the United Nations occupies a central place, adapted to undertake the fundamental transformations of our time and to better prepare our societies for the future.

In addition to collaboration under the Global Values Partnership, they will take advantage of the opportunities offered by their participation in the Leaders Network “Reinforcing Multilateralism Together” and their support for the Christchurch Call to Action and will continue to seek opportunities to carry out concrete actions in defence of modern, democratic, and internationalist values.

Demonstrating  their commitment to effective advocacy in support of shared objectives, the two leaders also took the opportunity to greet the signing late last year of the

Memorandum of Understanding on Cooperation on Seabird Conservation, and looked forward to the establishment of an implementation plan, under which New Zealand and Spain would work together to reduce the risk posed by commercial fishing to seabird populations with a particular emphasis on endangered species of seabirds, including the Antipodean Albatross. The leaders agreed that the two countries would review progress on the first anniversary of the MoU, in December 2022. The also acknowledged the shared work started under the Global Values Partnership on issues related to gender equality and judicial approaches to gender violence.

Reflecting New Zealand’s and Spain’s efforts to strengthen the ties between our two peoples and to deepen our reconnection as we emerge from the COVID pandemic, both leaders announced a significant increase to the reciprocal working holiday scheme and a commitment to continue working on the modalities of the scheme, so more young people can temporarily live, work, and travel within each other’s countries.

»Joint press release following the meeting between the President of the Government of Spain, Pedro Sánchez, and the Prime Minister of New Zealand, Jacinda Ardern«