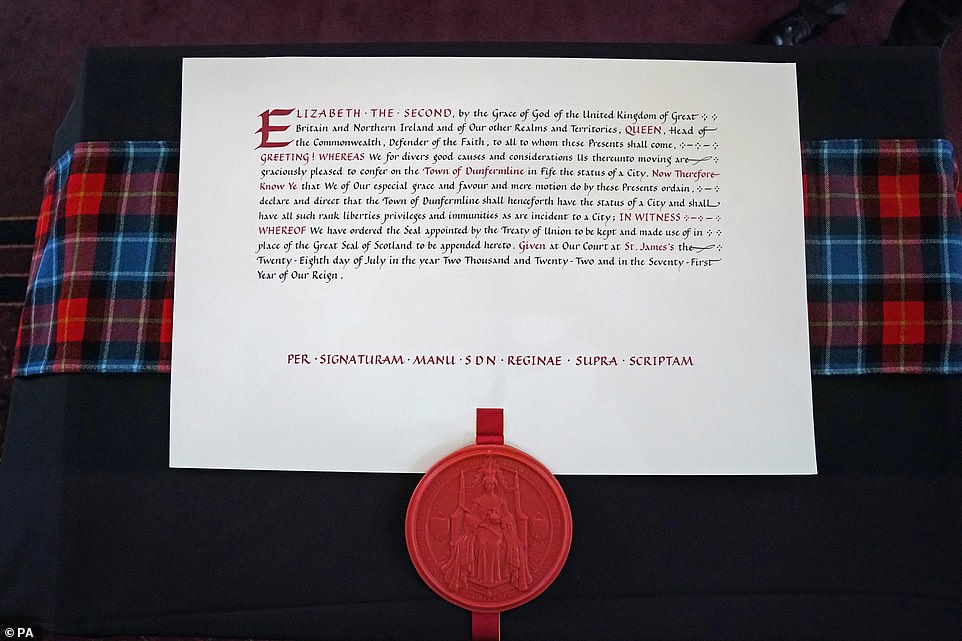 King Charles III paid a heartfelt tribute to his late mother at his first public appearance following the passing of the Queen.

As part of Her Majesty’s Platinum Jubilee celebrations in June, His Majesty and the Queen Consort are visiting Dunfermline to commemorate the old town becoming a city. The king stated that the visit would ‘please my darling mother as much as it pleases me’.

Charles and Camilla were greeted in Fife by community organisations, including a local pipe band and schoolchildren, with the new monarch of the United Kingdom stopping to speak with the audience and shake their hands.

Thousands of people came in Dunfermline to view the royal couple and other VIPs, including First Minister Nicola Sturgeon, who was met with both applause and jeers. Charles, dressed in a blue tartan kilt, was greeted with applause and shouts of “God Save the King.”

His Majesty and the Queen attended an official council meeting at the City Chambers, where the King will formally recognize Dunfermline’s elevation to city status and deliver a brief address. It is their first joint public appearance since the end of royal mourning last Tuesday.

During the ceremony, the King expressed his happiness at the announcement that the town will become a city. He stated that he hoped people would have “true pride in this new chapter.”

He stated, “That would certainly make my lovely mother’s heart happy, as it makes mine.” As you celebrate your well-earned status as Scotland’s newest city, I can only offer my deepest congratulations and best wishes for the coming years.

He continued, “I was ecstatic when it was revealed in May of this year that Dunfermline would be one of the eight communities to receive City Status in honor of the late Queen’s Platinum Jubilee.” There is no more suitable way to commemorate my cherished mother’s incredible life of service than by bestowing this honor on a location renowned for its own long and illustrious history and its important role in the life of our nation.

“Now, of course, we are gathered to celebrate this momentous occasion, but also to honor the life of Her Majesty, whose tremendous affection for Scotland was one of the pillars of her life.”

After the ceremony, they will visit Dunfermline Abbey to commemorate its 950th anniversary and meet with Historic Scotland staff to learn about the local area’s history and preservation efforts. The Abbey is the final resting place of Robert the Bruce and other Scottish royals.

The arrival of King Charles III at an official council meeting in Dunfermline, Fife, to mark the conferral of city status on the previous town.

The crowd greeted King Charles III with cheers upon his arrival.

Charles stated in his address, ‘We meet to celebrate this momentous occasion, but also to honor the life of Her Majesty, whose strong love for Scotland was one of her life’s pillars.’

The King: “There could be no more suitable way to commemorate my dearly departed mother’s exceptional life of devotion than by bestowing this honor upon a place renowned for its own long and illustrious history and for its important role in the life of our nation.” pic.twitter.com/lIGSDroz38

Lord Provost of Dunfermline Jim Leishman welcomes First Minister Nicola Sturgeon as she enters the City Chambers in Dunfermline. There were applause and jeers.

As part of the celebrations for the late monarch’s Platinum Jubilee, eight locations have been granted city status.

The bid was based on Dunfermline’s past and its historic status as an old seat of royal power, as well as the fact that it is one of the fastest-growing cities in Europe.

On Monday, the King and Queen will host a reception at the Palace of Holyroodhouse in Edinburgh to honor British South Asian communities.

They will meet between 200 and 300 British citizens of British Indian, Pakistani, Bangladeshi, Sri Lankan, Nepalese, Bhutanese, and Maldivian descent.

The ceremony will honor the contributions made by several members of these groups to the National Health Service, the arts, the media, education, business, and the armed forces.

In addition, Charles will conduct his first investiture ceremony as king for a small number of local citizens.

It occurred amid rumors that King Charles III will not attend the Cop27 climate meeting after being instructed by Liz Truss to stay away.

Reportedly, the king intended to deliver a speech during the November summit of world leaders in Sharm El Sheikh, Egypt.

However, the Prime Minister, who will also not attend, objected to his intentions last month during a meeting at Buckingham Palace.

It comes amid rising speculation that the government intends to scale back or possibly abandon its goal of achieving “net zero” carbon emissions by 2050. According to the Palace, the King had sought and received guidance from Miss Truss. The Palace stated that mutual respect and goodwill led to an understanding that the King would not attend.

The choice, however, is likely to have dissatisfied the King, who as the Prince of Wales had a long history of advocating for climate change mitigation. As heir to the kingdom, he also has a reputation for meddling in government affairs, most recently voicing his opposition to the government’s proposal to relocate illegal immigrants to Rwanda.

After the passing of his mother, his pals insisted he will not change his stance on global warming.

As the monarch arrived to grant city status to Dunfermline, he was greeted with bagpipes on St Catherine’s Wynd.

As king, he is required to maintain political neutrality, and in his message to the nation following the Queen’s death, he admitted that ‘it will no longer be feasible to devote so much time to the…issues I feel so deeply about.’

Prior to assuming the throne last month, King Charles announced he would attend Cop27, the 27th United Nations Climate Change Conference, which will be held from November 6 to 18.

A source informed the Daily Mail that there were never any concrete arrangements for the King to attend, despite the fact that he had previously attended, leading to speculation that he may do so again this year. As all foreign visits are conducted at the request of the British government, the Palace sought counsel.

The ‘unanimous’ reason, it has been reported, is that with so many requests for the King to be deployed overseas, Cop27 would not be the ‘proper occasion’ for his first overseas trip as monarch.

Sources highlighted his statement to the nation following the loss of his mother, in which he emphasized that he remained ‘ever conscious’ of his constitutional responsibilities despite the change in his circumstances.

As previously noted by the Mail, it is believed that the environment would continue to play a vital role in his efforts as monarch.

In his inaugural address at Cop21 in Paris in 2015, he described climate change as humanity’s greatest challenge.

In an impassioned address, the King mimicked Winston Churchill by imploring “the few” to save the earth and urging international leaders to contribute “trillions, not billions” of funds.

Last year, he also delivered a statement at the opening ceremony of Cop26 in Glasgow, in which he urged world leaders to adopt a “military posture” to combat climate change. Although he will not attend Cop27 in person, it is believed he will still make his presence felt, leaving open the possibility of a virtual appearance.

Tobias Ellwood, a member of the Conservative Party, stated in a tweet that he hoped the King would be permitted to travel to Egypt, stating that his presence would bring “real authority” to the British delegation.

While Boris Johnson has become a passionate supporter for net zero, it is believed that Miss Truss is more skeptical of the green agenda.

A government source stated, “The Palace and the Government separately considered and then agreed that… he will not be attending Cop.”

»In Dunfermline, Charles and Camilla«