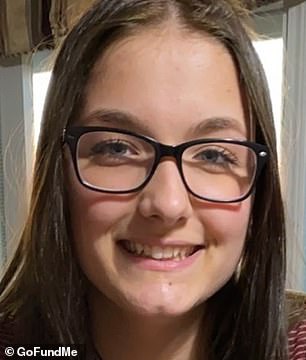 A 42-year-old Chicago man charged with murdering his daughter confessed in a letter to his son afterwards: ‘I lost my mind, went out of control and beat the sh**t out of her.’

Mohammed Almaru has been charged with first degree murder for the death of his daughter Mia Maro, 17. She was found dead inside the family home on Sunday by an aunt.

Her father had beaten her to death with a metal pole and rubber mallet after going through her phone and discovering she was ‘lying’ about things to him, according to charging documents.

In the days before her death, he had forbidden her from going to senior prom, telling her he ‘didn’t trust her’.

It’s unclear if she did go to the prom or not but her father attacked her in a rage and told family it was because he discovered she’d been lying to him.

The girl’s mother, Audrey, is disabled after suffering an unspecific brain injury in 2019. She lives in the home but her carers are listed as her sisters.

In the letter to his son after beating his daughter dead, Almaru said: ‘I lost my mind, went out of control, and beat the s*** out of her, and accidental hit her in the head.

‘I laid down with her, was uncontious [sic] and woke up to her cold body,’ he told his son.

After the killing, he tried to kill himself by slashing his own throat and his wrists.

Almaru is now in the hospital and it’s unclear what his condition is. He has been charged with first degree murder.

Charging documents reveal how the pair had argued about whether or not Mia would be allowed to go to prom on Friday night.

She told friends that her father was going to allow her to attend, and that he had even helped her pick out her dress.

Something changed however by the day of the event.

He suddenly told her she couldn’t go and that he didn’t trust her, according to the court documents.

It’s unclear if Mia did go or not.

On Sunday, two days after the prom, her aunt Randa was worried that she hadn’t heard from her niece. She sent multiple texts that went unanswered.

In a ruse to get Almaru to allow her inside, she planned to buy marijuana from him.

Shortly after 5pm, Almaru opened the door to the aunt. He asked her to sit with his disabled wife Audrey, then he vanished.

The aunt then heard gargling from a room in the home. She went inside and found Mia under a blanket, lifeless, and the father who had just tried to kill himself.

She called 911 and Almaru was taken to the hospital.

It’s unclear if the couple’s sons were inside the house at the time of the killing, or at any other point over the weekend.