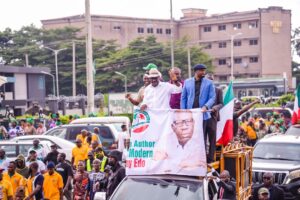 Mr. Godwin Obaseki, Governor of Edo State, has stated that the digital tracking of election results that were electronically transmitted in Osun State last Saturday contributed significantly to the victory of the Peoples Democratic Party (PDP) candidate, Senator Ademola Adeleke, at the polls.

Obaseki, who returned from vacation on Tuesday to a carnival-style reception led by his deputy, Rt. Hon. Comrade Philip Shaibu, Chairman of the State chapter of the PDP, Tony Aziegbemi, and Speaker of the Edo State House of Assembly, Rt. Hon. Marcus Onobun, said the successful implementation of the Situation Room in Edo State in 2020 prepared him to lead the charge in the Osun Situation Room on election day.

In Government House Benin City, Obaseki described his role in the Osun election, saying: “When I arrived in Osun, I asked members of our party to show me their Situation Room. On getting to the Situation Room I asked where is your situation? We looked at the result of the last Osun State election in 2018 and we studied it polling unit by polling unit and I realized that their situation was like what we had in Edo. After a thorough scrutiny of the previous election result I saw the tricks (wayo), and we resolved that this time everything must turn around for our good in the PDP.”

He added: “On Saturday as the results were dropping polling unit by polling unit, by 10:15pm we were there looking at them and by 2am they wanted to do what the opposition did to us in Orhionmwon Local Government Area in the last Edo election, but we kept vigil. They were holding on to the result of Ife East Local Government Area which had forty thousand votes, they wanted to change the result but we were confident because we knew the whole result was being monitored from Abuja as well. When the results were released we won. We won because God will always win.”

The Governor promised Nigerians that a PDP-led federal administration will better serve them because the ruling All Progressives Congress (APC) cannot fix the country’s economic and other crises, and asked all PDP members to unite and overcome lingering disputes within the party.

“A house that is divided will not stand. We must unite PDP across the country so that we will change the government at the Federal level. Our people are suffering too much, the APC-led federal government cannot help us, we know them and we must change this government.”

He assured everyone that he was rested and prepared to start working again after his vacation.

Earlier, the Deputy Governor welcomed his principal return from vacation and praised him for his significant involvement in the election of Osun State Governor-elect.