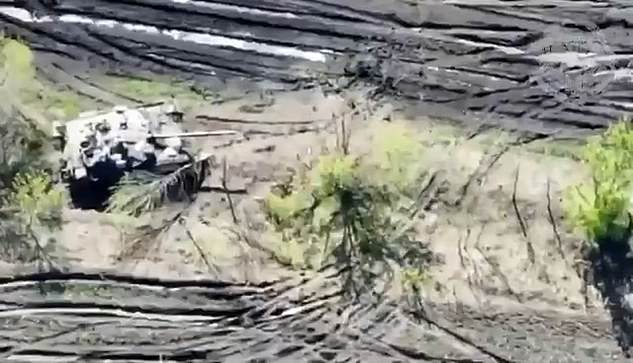 Ukraine today showed a video claiming to be a military drone hit on a Russian landing ship supplying a TOR anti-aircraft missile system to Snake Island.

The footage appears to show the destruction of a large Serna-type landing craft in an air strike.

Enemy units remaining on Snake Island remain without air cover and will be destroyed and burned out like cockroaches or locusts,’ said Ukrainian official Anton Gerashchenko.

Other reports said the landing craft had been hit by a hit by a Ukrainian Bayraktar TB2 military drone.

Black and white footage showed little human figures moving around on the landing ship moments before a white flash engulfs the craft. Figures continue to move around on the craft after it is hit.

The footage also showed an attack on a building on Snake Island. What appear to be Russian personnel are seen patrolling around the building when it too is blasted from the sky.

The Serna class – Russian designation Project 11770 – is a type of ‘air cavity’ designed landing craft constructed for the Russian Navy. Twelve boats were built between 1994 and 2014.

The claim came a day after Ukrainian sources alleged they had struck modern Russian frigate Admiral Makarov in a Neptune missile attack.

There has so far been no confirmation of the Makarov attack which was said to have damaged the warship.

Meanwhile, the UK’s Ministry of Defence has concluded that Russia’s latest and most advanced tanks are still vulnerable after one was blown up by Ukrainian forces.

A modern T-90M tank, the most formidable in the Russian army, was caught on camera being hit and destroyed by a rocket in the north-eastern Ukrainian region of Kharkiv Oblast.

The development will hearten NATO planners as the Ministry of Defence states that the conflict in Ukraine is taking a heavy toll on some of Russia’s most capable units and most advanced capabilities that they will struggle to replace due to Western sanctions restricting access to vital components such as microelectronics.

‘The T-90M was introduced in 2016 and includes improved armour, an upgraded gun and enhances satellite navigation systems,’ the MoD tweeted in a regular bulletin on Saturday.

‘Approximately 100 T-90M tanks are currently in service amongst Russia’s best equipped units, including those fighting in Ukraine.