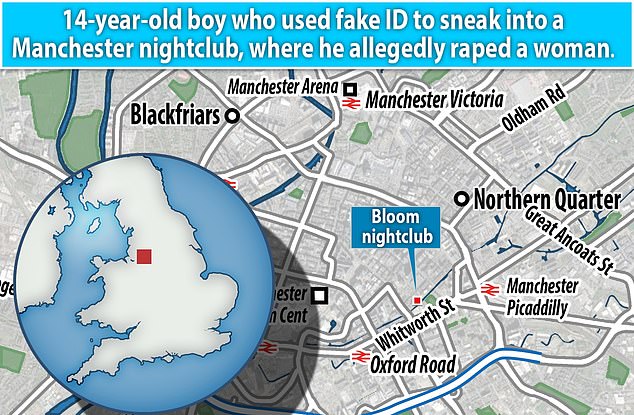 Detectives have detained and questioned a 14-year-old schoolboy after a lady claimed she was sexually assaulted at a city’s well-known nightclub’s male restrooms.

However, when the victim’s companions called for help and security discovered them in a restroom cubicle, they reportedly just walked away and left the woman with her alleged attacker, according to testimony at a licensing hearing.

The kid was later detained, according to Greater Manchester Police (GMP), following the alleged sex attack that happened early on June 29 at the Bloom nightclub in Manchester’s gay town.

According to GMP, the female client and her friends claimed that at around 4.15 am, a youngster approached them and offered to sell them narcotics. He then accompanied her into the male restrooms.

According to a police report, a buddy claimed security personnel told the teenager to “have a nice one mate” as he entered the men’s restrooms with the woman.

The teenage kid is then accused of jumping on the woman and raping her inside one of the men’s restroom stalls when they were alone.

About twenty minutes later, the woman is claimed to have texted her friends to plead for assistance; these friends then informed the club employees.

A male bouncer allegedly went into the restroom, knocked on the cubicle, noticed there were two people inside, and just departed after letting them stay. This was alleged before a Manchester City Council licensing hearing.

The victim did not want the police contacted, so the adolescent who was found and detained outside the club was released.

However, according to a police report sent to the city council, at around 5 am, one of the victim’s friends contacted GMP to report the event, and police then arrived at the scene.

Later, a 14-year-old kid was detained for questioning after being apprehended on rape suspicion. While investigations continue, he has now been released on bond.

PC The nightclub should have called the police right away, according to Stuart Hammersley of the GMP, because otherwise “any forensic opportunities were lost.”

That’s one of the most unexpected things about everything that’s happened, he said.

“I can understand why they would take that on board and not necessarily inform us if it was a very minor event, if someone had been shoved or assaulted but there was no significant injuries.

“We lost the chance to detain the male at the scene and any forensic opportunities.”

“I think it’s really incumbent on the premises to contact us either way,” the victim said at that point, “despite the victim not wanting the police to become involved at that stage.”

PC Hammersley continued, “I don’t think anything was mentioned to him explicitly about what was going on,” in reference to the security leaving the two in the restroom cubicle.

However, it would be against security policy to permit two people to share a restroom stall without performing checks.

At the committee hearing, the club’s license was put on immediate hold, pending the outcome of a thorough examination, which will be heard on July 25.

The panel expressed their “deep worry” over what transpired during the terrible occurrence on last Wednesday.

Stephanie Williams, a lawyer for the premises license holder, stated during the hearing that the club “understands the significance of what transpired” and is undertaking a “complete investigation,” thus it was unable to say further.

In a statement released prior to the court, the club announced that it would be closed while the investigation was ongoing and that it was “operating with the authorities and giving all support possible.”

Due to the seriousness of an incident that happened in the club on Wednesday, Bloom Manchester will be closed in order for a thorough investigation to be conducted, according to Bloom.

We appeal for our clients’ compassion and patience at this time because we are assisting the authorities and working with them.

Anyone with knowledge on the event is invited to get in touch with GMP.