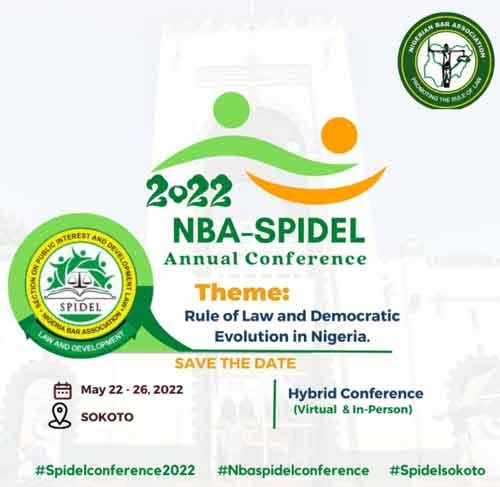 Nigerian Lawyers have been advised to be circumspect on calls for the cancellation of the 2022NBA-SPIDEL conference scheduled to hold in Sokoto.

The call came following the murder of Deborah Samuel, a female student of College of Education by irate youths.
The Chairman of the Nigerian Bar Association (NBA) Section on Public Interest and Development Law (NBA-SPIDEL), Dr. Monday Ubani said the barbaric act was not authorized or approved by the State Government.

He said “the State Government had issued a statement condemning the act and requested that the crime perpetrators be brought to book.”

Ubani said the State Governor, Alhaji Aminu Tambuwal had continued to intensify efforts towards ensuring that the peaceful atmosphere in the state of the Caliphate was not breached by the unfortunate incident.

He said; “Governor Tambuwal, immediately after the unfortunate incident happened, first met with the Chairman of the state chapter of the Christians Association of Nigeria, CAN, Rev. Nuhu Iliya, before meeting with the Council of Ulamas in the State. The Governor has also met various strategic political and religious leaders, opinion molders and relevant stakeholders in the state, during which his message centred, primarily, on the need to ensure peaceful co-existence among all the people in the state.”

Ubani maintained that it is preposterous for lawyers to call for the cancellation of the 2022 NBA-SPIDEL Conference scheduled to hold in Sokoto in protest against the killing of Deborah which was carried out by law breakers in the state.

“Arrest of two persons have been made and we await the outcome of the process. Gentlemen let us all be circumspect over the sad Sokoto incident,” he stated.

Ubani said the barbaric Killing was condemnable as no individual had any right, under our present jurisprudence, to take life except in accordance with due process.

He said; “Assuming but not conceding that the said lady has committed a written and known crime, the state alone has the requisite power to prosecute and punish the alleged crime. Extra judicial killing is not allowed by our laws.
“Having said that, it will be ridiculous for someone who is a lawyer to be suggesting that we should cancel our conference that is billed to take place in Sokoto because of the acts of law breakers in the state.

“I have sent a text (message) to the Governor and the AG (Attorney-General of Sokoto), and requesting for a statement that our safety is guaranteed. I am also in touch with the President of the Bar, Mr Olumide Akpata and if there is any need to take a drastic decision about the conference in Sokoto we will ensure prompt communication to the constituency, “ Ubani explained.