According to a preliminary assessment issued Tuesday by the National Transportation Safety Board, the copilot of a small aircraft who committed himself by jumping from the aircraft in North Carolina was distraught at destroying the aircraft’s landing gear during a failed uncontrolled approach.

According to the report, Charles Hew Crooks, 23, the copilot of the aircraft, ‘got clearly unhappy over the rough landing’ minutes after they were forced to divert to another airfield for an emergency landing, the pilot-in-command told federal investigators. 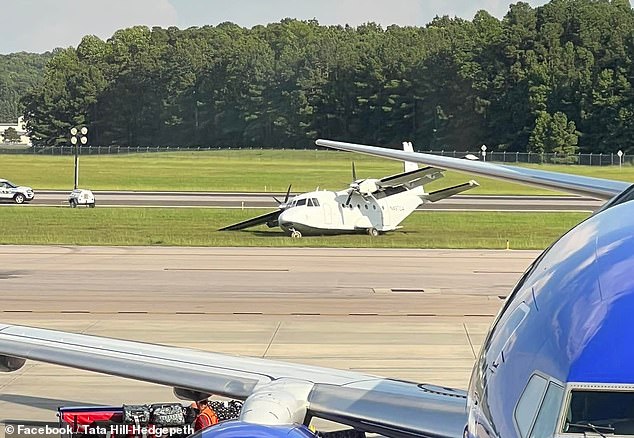 At 3,500 feet, the copilot opened his side cockpit window and “may have been ill,” according to the report.

Then, he indicated that he needed air and felt like becoming ill by lowering the ramp at the rear of the aircraft.

Crooks “got up from his seat, removed his headset, apologised, and exited the aircraft through the rear ramp door,” according to the report.

About 30 miles south of Raleigh-Durham International Airport, the event happened on July 29. Crooks was not wearing a parachute at the time, and his corpse was discovered in a garden near Fuquay-Varina.

According to the report from Tuesday, the two pilots had earlier in the day been doing skydiving runs out of Raeford West Airport. The harsh landing happened while they were on their third descent into the airport.

When the plane “fell,” Crooks was in charge of flying the approach, and both pilots requested a go-around manoeuvre, according to the report. The right main landing gear collided with the runway before Crooks could start a climb.

According to the report, the other pilot took over the aircraft controls. He gave Crooks instructions to claim an emergency and ask for a detour to land at Raleigh-Durham International Airport.

According to the report, the pilot said to investigators that Crooks lost her cool “approximately 20 minutes into the diversion to RDU, after giving approach and emergency briefings.”

An audio clip of two unidentified Federal Aviation Administration workers alerting a 911 dispatcher that the damaged jet was flying to the airport earlier this month was made public.

According to press sources, the pilot on board reportedly informed them that Crooks had “jumped out of the plane” at the moment.

According to the audio tape, a controller informed the 911 operator, “We have a pilot who was coming to the field.” “His copilot leaped off the plane.” Here are the coordinates, where he made contact with the earth.

Personnel from the FAA remarked, “At this point, all we can do is recover,” at the conclusion of the 911 call. “I mean, I dunno,” This is the weirdest thing I’ve ever heard, I’ve never heard it before.

About 13 minutes into the contact, the controllers repeatedly reported that the co-pilot had leapt out of the plane.

The first 911 call, according to Wake County Emergency Management Chief of Operations Darshan Patel, was what sparked the hunt for Crooks.

The National Transportation Safety Board noted in its investigation that the fuselage of the aircraft had also sustained significant damage.

The commanding pilot of the aircraft, whose identity has not been made public, suffered minor wounds. He was sent to Duke Hospital and afterwards discharged. He is in excellent shape.

In a 40-minute conversation between the unnamed pilot and air traffic control, Crooks’s fall from the aircraft is mysteriously not mentioned or even hinted at.

We’ve lost our right wheel, emergency, the pilot can be heard shouting. We would want to fly across to Raleigh and land there.

We have two people on board, he continues. There is gasoline on board to keep us going for the next four hours.

More specifically, did you attempt to land on Raeford West? he queries. Was the wheel still in the air when it fell off?

The pilot said, “We were trying to land.” When we opted to turn around after a hard landing and make touch with the earth, we lost the wheel.

The pilot said, “Going to fly in as slow as we can and I assume we are going to put it on the belly,” when air traffic control inquired as to how they meant to land. The right wheel of the aircraft had broken off, he said once again.

Around 2:40 p.m., when the jet touched down on Runway 5R-23L at Raleigh-Durham International Airport, many law enforcement agencies were waiting.

However, there was only one person on board; Crooks, the second co-pilot, was nowhere to be seen.

Later, the family who resided on the property where Crooks was discovered claimed to have contacted the police after hearing a loud crash.

The 23-year-father, old’s Crooks, said that flying was his son’s “lifelong goal” and that he had been a flight instructor in the past and was qualified to fly in all kinds of weather.

WRAL was informed by Crooks that he had just lately said how he “wouldn’t exchange places with anybody in the world.” He was happy where he was.

Rampart Aviation, located in Colorado, was the owner of the aircraft. A request for comment from DailyMail.com received no response from the business. According to Crooks’ LinkedIn profile, he began working for the firm five months ago.