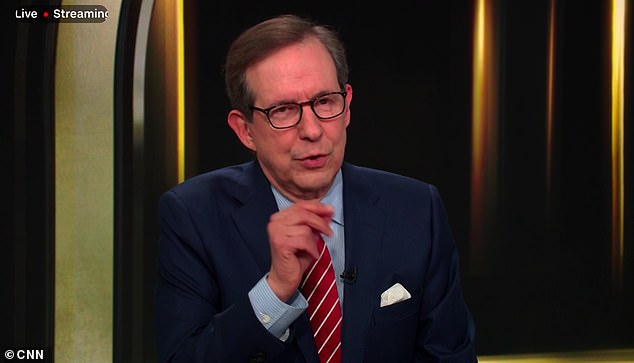 CNN was one of the most trusted news firms in the country, covering the whirlwind agenda with facts and analysis that few rivalled.

But over the last few years the media company has been accused of nosediving into a chaotic left-wing entertainment service that is a shadow of its former self.

The crisis culminated yesterday in what has been described as the ‘biggest flop in US broadcasting history’ as it pulled its hyped up new streaming app.

Bosses dumped CNN+, its $300million vanity project that was unveiled to much fanfare, after just three weeks amid feeble subscriber figures.

It spat in the face of former chiefs such as Jeff Zucker who had negotiated pumping $1billion into it over four years.

The firm was exposed when low-level staff revealed their jobs had been slashed without them knowing – only finding out through social media.

But they launched a furious fightback last night as they openly slammed senior figures for ‘pulling the rug out beneath us’.

The move appeared to have been triggered by executives at Discovery, which only completed its rocky merger with CNN owners WarnerMedia earlier this month.

Bosses had been dropping hints for weeks about their opposition to the streaming service, including CEO David Zaslav who was said to be against it from the start.

Yet the huge embarrassment, which sees stars such as Chris Wallace and Eva Longoria left in the lurch, seemed to be the climax of a raft of failings at CNN.

The company’s rapid decline can be traced back to its move away from impartial journalism towards opinion-based shows in the last few years, according to some critics.

Its founding fathers in the 1980s created a beacon of unbiased reporting that made ‘news the star’.

The firm cemented its position in American households during the Gulf War and was seen by many as the nation’s ’emergency room’ during terror attacks or elections.

But by the 2010s it started to flounder as US media became more politically aligned, with viewers ditching it for other channels in their droves.

It hired former NBC chief Zucker in 2013 to try to turn this around, with him bringing in a swathe of commentary to try to compete with the likes of Fox News.

It saw the polar opposite firms set on parallel paths, with CNN morphing into the left-wing version of its right-wing rival.

By October 2019 the company had settled into third place in the viewer ratings, cemented behind Fox News and MSNBC for the 10th quarter in a row.

Meanwhile, to the fury of bosses, Fox News continued to soar, having been the most watch cable news network in the country since 2002.

CNN’s mammoth editorial team – around 4,000 by 2010 that dwarfed its rivals – made this even more concerning.

But chiefs appeared to realize covering straight news was bumping viewership slightly yet not enough to keep people tuning back in.

Its move to commentary based pieces has bedded down recently, with ‘analysis’ articles across the site now often a smokescreen for commentary, critics claim.

Another, by CNN Editor-at-large Chris Cillizza last May, was titled: ‘This is how dangerous right-wing media *actually* is.’

And one more, from January, said: ‘Biden’s legislative problem is threadbare margins, not left-wing overreach.’

The examples are a far cry from the original CNN people trusted before the shift to commentary in the 1980s.