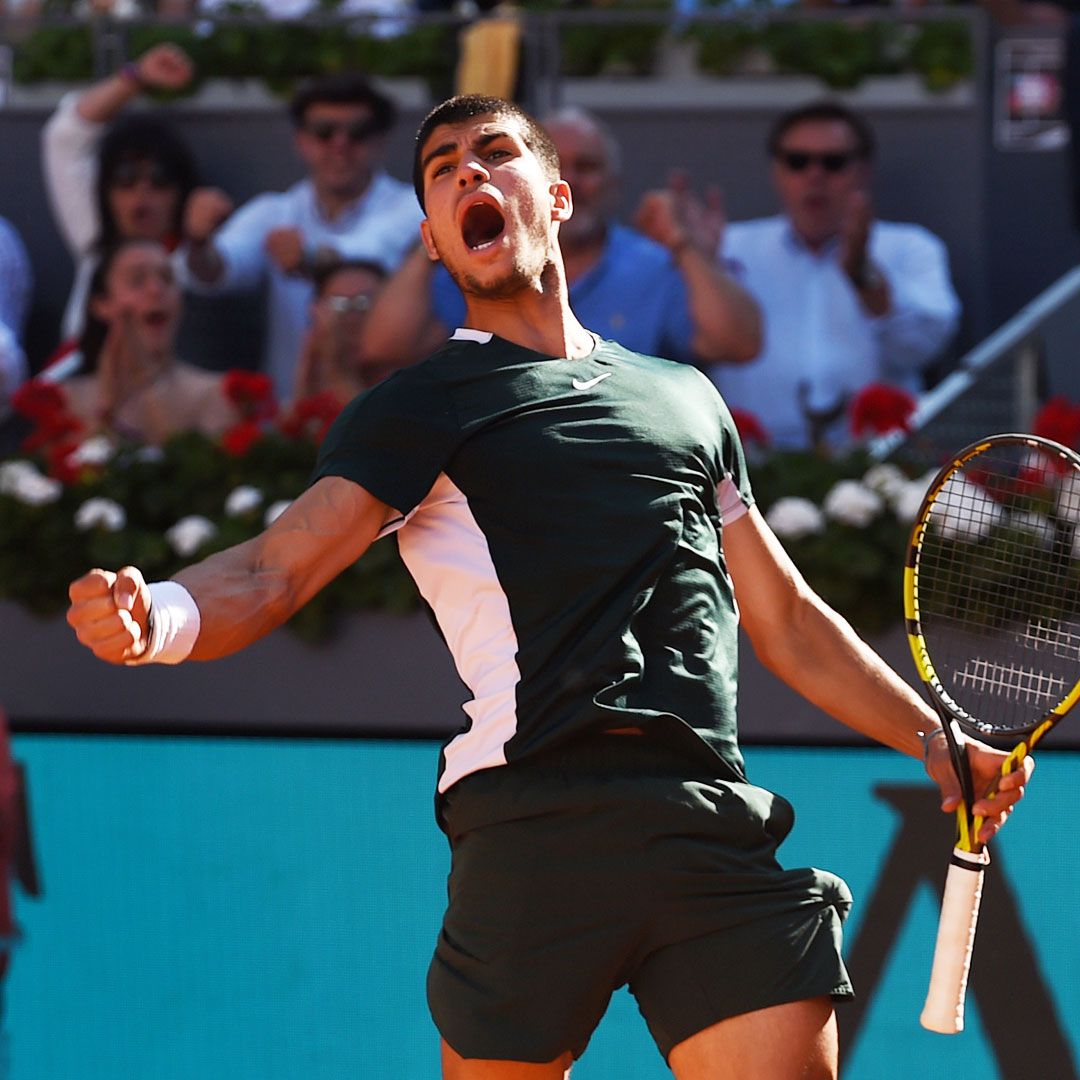 The 19-year-old Spaniard reached his second ATP Masters final in five weeks and claimed his first ever win over a reigning world number one, overcoming Djokovic 6-7 (5/7), 7-5, 7-6 (7/5) in front of a sell-out home crowd at the Caja Magica.

Alcaraz now owns a tour-leading seven top-10 wins this season, and enters Sunday’s final – against Stefanos Tsitsipas or defending champion Alexander Zverev – carrying a nine-match winning streak, having triumphed in Barcelona a couple of weeks ago.

He is the youngest player to defeat a world number one in 17 years.

A calm and collected Alcaraz kicked off the match with a service break, thanks to a well-timed cross-court backhand passing shot, and was soon up 3-1 on the top seed.

Djokovic, who turns 35 this month, struck back to draw level for 4-4 as the set fittingly went to a tie-break.

A fired up Djokovic sped to a 5-1 advantage in the breaker and soon got his hands on four set points.

Carlos Alcaraz saved the first with an aggressive return and another with an ace. A spot-on drop shot saw the Spaniard save a third set point to narrow his deficit to 5-6 but Djokovic closed out the set on his fourth opportunity after 62 minutes of play.

Carlos Alcaraz upped the ante in the third set

The players were neck and neck in the second set until Alcaraz upped the ante in game 12, winning key battles at the net and perfectly utilising his drop shot when he needed to.

The Murcia native claimed a break and the set with a sensational get, running down a Djokovic dropper and hitting a winner from outside the doubles alley.

Djokovic staved off three break points on his serve in game four of the decider, digging deep for a 2-2 hold.

The world number one fell to the ground during the next game and needed some medical attention for an open wound on his right hand. Two more break points came and went for Alcaraz on his opponent’s serve as Djokovic battled to hold for 3-3.

It was Djokovic’s turn to put pressure on the Alcaraz serve, but the seventh seed successfully side-stepped a break point to hold in game seven.

The crowd went wild as Alcaraz blasted a forehand winner to get his first match point. Djokovic responded with a steely ace and dug deep to level for 5-5.

It all came down to a final-set tie-break and the Caja Magica was shaking with “si se puede” (Yes you can) chants. Alcaraz drew first blood, opening up a 4-2 gap.

Djokovic saved a second match point for 5-6 but Alcaraz was third time lucky, claiming a statement three-hour 35-minute victory with yet another forehand winner – his 35th of the match.